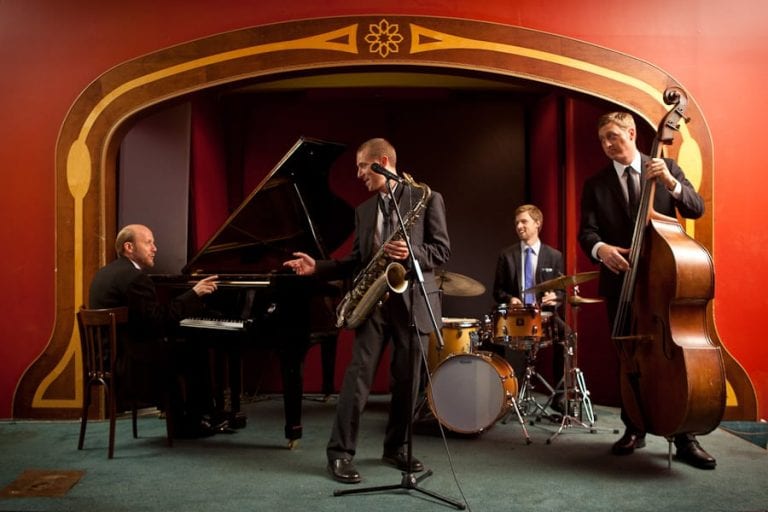 Local saxophonist Will Scruggs performs on the Whisper Room stage at Churchill Grounds.

News: Jazz scaled back at Churchill Grounds, but owner sees downsized club as “a revival”

Midtown jazz venue Churchill Grounds is closing its long-running Whisper Room performance space adjacent to the cafe. The last concert in the space is set for Wednesday, July 31. Starting this weekend, owner Sam Yi will revert to showcasing jazz on the smaller, cafe side of Churchill Grounds on Friday and Saturday nights.

After Wednesday night’s performance by the Justin Chesarek Trio, Yi said, he will close the club for a day in order to move equipment to the new stage. Jazz in the smaller space will start Friday with bassist Dean Demerritt’s quartet.

“Having the Whisper Room as a jazz showcase was great, but we just weren’t generating enough revenue to continue to do it over there,” Yi said.

He had been hosting jazz five nights a week in the larger performance space for the past 10 years, but the new direction is a return to Churchill Grounds’ roots. Yi programmed jazz in the smaller space for six years before opening the Whisper Room.

Closing the room, which is nestled between the Fox Theatre and the cafe, had been on Yi’s mind for the past few months, he said. When it came time to sign a new lease, an increase in rent was more than enough reason to revert back to the Churchill Grounds of old. Yi stressed, however, that had the Whisper Room been attracting enough of a following, the slight rise in rent wouldn’t have prevented him from keeping it open.

“The other side wasn’t generating money,” he said. “I had to put in a lot of my own money to keep it afloat. I just came to the realization that I couldn’t do it anymore.”

While his initial plans for the new-look Churchill Grounds include jazz only on weekends, Yi allowed that he wants to retain the weekly jam sessions previously held on Tuesday nights. “I want to continue to be a building block or an advocate to the folks who are trying to cultivate their talent,” he said, adding that he might hold the new sessions on Thursday nights. “We have the longest-running jam session in Atlanta, at 16 years plus.”

Chesarek, who has performed with his band in the Wednesday night slot at Churchill for nearly five years, will be onstage for the performance goodbye to the Whisper Room. Though the decision to close the space doesn’t come as a big surprise to the drummer, it’s still a disappointment. Chesarek and his musical colleagues honed their craft in that room, and Yi gave them the space to play and develop in front of an appreciative audience, though they rarely played for more than 15 people on a Wednesday night.

“Having that space gave us the option of really presenting a performance,” Chesarek said. “We learned so much about music from having a weekly gig for almost five years.”

But it was a struggle to attract people on a weeknight, and toward the end of his run, Chesarek started experimenting with setting his band up by the window on Peachtree Street instead of the stage, which isn’t clearly visible from outside. The change attracted some new listeners, and on the cafe side, musicians will be positioned in the window, an invitation to people on the street. “If you can see it in the window when you walk past or drive past, that will really enhance things,” Chesarek said.

Chesarek, whose band will play at the new Churchill Grounds on August 16, is glad to see the venue continue. “We need Churchill,” he said, adding that its position in the very heart of Atlanta is important for musicians as well as listeners. “We need someplace that’s in the middle of everything.”

The club is an important part of the local jazz community, and Yi said he views the new development as the next stage; from his perspective, the venue is being reborn and will be even better. Customers, he said, have echoed those thoughts, and he has heard time and again that some aspects of the original setup contributed to a better musical experience.

Yi spoke of the change with the optimism that reflects his stake in the local jazz community. He has put too much time, effort and love into jazz in Atlanta to stop presenting the music altogether, so he’ll turn to the weekends, putting on concerts in a smaller setting, hoping to attract new listeners and welcome back regular customers.

“For me, it’s like a revival. I believe we’re going to be a lot healthier. I’m actually looking forward to this new opportunity. I’m ready to really make a good run at it again.“