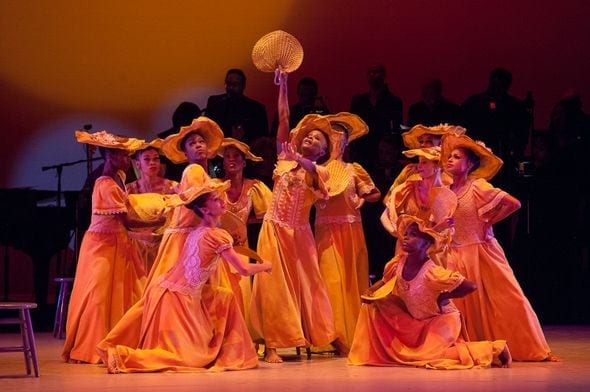 News: Ailey, “Dancing with the Stars” at the Fox; Atlanta dancers recognized

The Fox Theatre canceled the National Ballet Theatre of Odessa’s one-night performance of Romeo and Juliet on January 7. Hopefully these upcoming dance events will stick: The Alvin Ailey American Dance Theater is scheduled for February 10-13 (they skipped last year because of the shutdown) and Dancing with the Stars: Live! 2022 lands for one night, February 26.

Because of the pandemic, Komansé Dance Theater postponed the January 7 premiere of its film PERMANENT: A Couple in Prospect Park (being together) at the High Museum. The film is inspired by a Daoud Bey photograph of the same title, on show in the High’s exhibit Picturing the South: 25 Years. Permanent Project is an initiative dedicated to highlighting works by Black artists in the High’s collection. The African Diaspora Art Museum of Atlanta, led by director Fahamu Pecou, developed the concept with the High. The film will be rescheduled for a later date, on a HIGH Frequency Friday.

Three Atlanta dancers made Dance Magazine’s 2022 “25 to Watch” list: Kennesaw State University graduates Simone Stevens and Darvensky Louis and Atlanta Ballet dancer-choreographer Darian Kane. Stevens is now with Hubbard Street Dance Chicago. The company rarely hires freelance dancers, but made an exception for Stevens. Louis was hailed for his performances in Omar Román De Jesús’ Muerte Cotidiana at Kennesaw State University Dance Theater last fall and Terminus Modern Ballet Theatre’s Marley Was Dead, To Begin With on stage and online. Kane made the list for successfully leaping into her role as dance-maker with Dr. Rainbow’s Infinity Mirror, which she is expanding for Atlanta Ballet’s performances at the Cobb Energy Performing Arts Centre February 11-13.