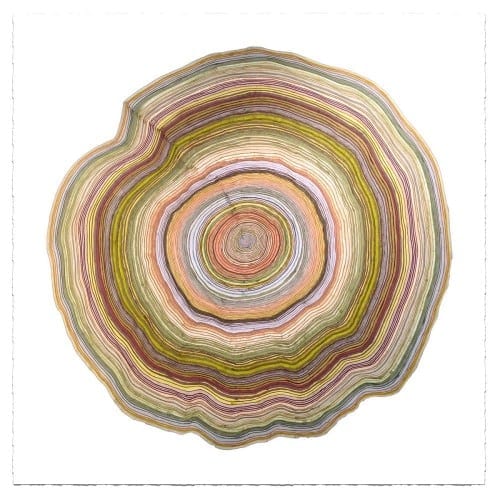 Steven L. Anderson and Susan Hable Smith bring design backgrounds to their artistic efforts in a two-person exhibit, Leaves of Grass, at Poem 88, and it shows in this collection of works — photography, drawing and painting — linked by an exploration of self to the natural world.

Anderson has demonstrated an interest in the energy of place in the natural world in a residency at Joshua Tree National Park and in work commissioned by the Hammer Museum in Los Angeles, and here he draws on that concern in a salon-style grouping of works unified by a sense of color and the meditative process by which he creates them.

The most compelling are his bindu-like renderings of real or imagined tree rings. These quietly energetic, colored marker and pen drawings on paper take their titles from the number of “year- rings” they include.

His drawings of individual fern fronds at first glance could mistakenly be considered merely decorative. A closer look rewards by revealing the many individual and meditative marks Anderson has invested in the process. If craft is about the material, and art about the idea, then his drawings are elevated by an earnest belief in his role as intermediary in the transmission of energy and language of the natural world.

Other roots and plants get the same treatment as the ferns. Just like the mesmerizing pentagonal bloom on the real thing, Datura Magic draws you in with its beauty and resembles its less toxic cousin, the morning glory. Anderson has placed a tiny mirror at its center, perhaps as a nod to its history as a psychoactive plant used in ritual or shamanic practice.

Smith’s work in textile and fabric design visibly informs her work here. In four large oils on linen she “freehands” the form of a pressed strawberry vine from her grandmother’s garden by filling in with bright blue oil around the looping white gessoed shape of a vine and bloom. In an optic push/pull, the white ground and the deep blue paint alternately vie for position.

It was interesting to learn that the artist found the blue pigment she mixes with oil to make her paint in Paris at the same manufacturer that created Yves Klein’s famous blue. The singular color that results evokes the enameled number signs of a Parisian neighborhood more than the backyard plants from which she finds inspiration. A mottled, uneven delivery of pigment creates interesting variations in color and delineates shapes, intentional or not, within the otherwise bold, but simple, composition.

An even more graphic work, the black and white joe pie weed (2014), a large india ink on paper, renders a close-up view of joe-pye weed, the ubiquitous southern roadside perennial. Appealingly eye-popping, especially from across the gallery, it seems most representative of Smith’s talents with textile design.

She also exhibits six digital prints in color of veined leaves of the caladium plant, each one possessed of a translucent ghostliness that makes it both intensely present and a remnant of the past.

Both artists are relatively new to the South. Smith moved to Athens by way of Corsicana, Texas, and New York City. Anderson, a 2014-15 Studio Artist at the Atlanta Contemporary Art Center, came by way of Michigan, Chicago and Los Angeles. But each creates artifacts that fit within a Southern aesthetic of place.

The works gathered here in Leaves of Grass may emanate from a close examination of objects in the natural world, but none is merely an evocation of nature. To divine the meaning in each requires an attentive interaction with the work, just as it did with the artist and his or her subject.

Gallery director Robin Bernat found inspiration for the exhibition title in “Roots and Leaves Themselves Alone,” a poem collected in Leaves of Grass, Walt Whitman’s opus of celebration — of nature, of this country, of himself. Whitman wanted his poems to be read in the outside world where they would be most successful and created a pocket-sized book so his readers could do just that.

Smith and Anderson have brought the outside world in for their audience with bodies of work that ask us to participate just as Whitman asks of his readers — to “become the aliment,” and to bring form with our attention, our intention, by seeing these drawings as more than mere roots and leaves.

Though Smith’s efforts are bolder and more direct than Anderson’s more allusive, quietly introspective work, each artist, like Whitman before them, offers reward that is commensurate with our participation in the process.

Artists’ talks October 4 at 1 p.m. The exhibit runs through November 8.