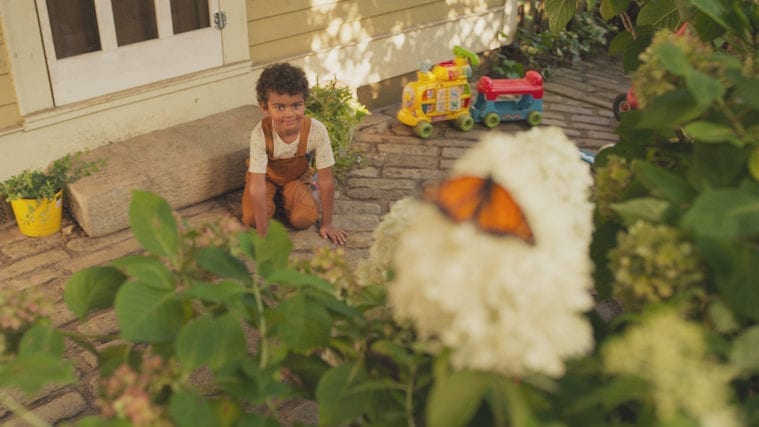 One is a film about family, with a decided twist; another, an animated tale of an unlikely hero; and yet another is based on a haunting song.

Kristina Arjona Adler’s Gatito, Matthew Maloney’s Gryphon Animo and Lonnie Holley and Cyrus Moussavi’s I Snuck Off the Slave Ship are part of the It’s a Beautiful Day in the Neighborhood block of short films screening April 4 at 7:30 p.m. at the Plaza Theatre as part of the 2019 Atlanta Film Festival. They may be diverse in nature, but these films share one important common trait — they’re all directed by Georgia filmmakers.

Adler’s Gatito, a world premiere, deals with a young Hispanic boy who wants to be a cat for the day and an understanding father who grants him that wish. The director, a former actress, had become frustrated by the kinds of roles she saw for women in their 20s, which inspired her to create her own production company, Jump Cut Collective. Through Jump Cut Collective, she’s made five short films and has sought to create more dynamic, diverse roles for women, people of color and LGBT performers.

A collaboration between Adler and writer Elin Rose Hill, Gatito explores queer joy in a family-friendly space. Through the portrayal of a Hispanic father who lets his child do something not considered traditionally masculine, the film also allows Adler to reflect on the idea of machismo. “Toxic masculinity, what’s going on with our boys — that is becoming more of a national conversation this year,” she says. “This film is about what it’s like, even if you don’t understand each other, to support and build someone up when they are young and exploring who they are.”

She and Hill wrote the piece in two weeks and shot it in a day and a half. Telling a story in a short time frame — here a span of eight minutes — can be difficult, however. “The tricky thing is getting your audience to care about your characters quickly, to have something that may seem bite size but lets you experience the story.  For our film, there is not much dialogue — the dad never speaks, and the child only meows. I think that is a playful way to engage the audience. You have to be very clear about your choices and what is important and what is not.”

Maloney’s film Gryphon Animo is an 11-minute animated short film in which a hero has to pluck a feather from a gryphon to save his sister’s life. A self-described “East Coast guy” who strongly disliked his time in Los Angeles, Maloney has been based in Atlanta since 2006. Since he moved to the area, the industry has exploded. “Now there is a new studio popping up every few months. It’s like being in the Gold Rush.”

Maloney taught animation part-time at SCAD and is now a co-owner of Black Rainbow Media. When he’s not handling his day-to-day professional obligations, he lets himself flex his more creative muscles on the side. “Client work can be soul crunching,” he says, “but then you do one [project], just for the sake of good filmmaking and animation and storytelling.”

With Gryphon Animo, Maloney set out to make a love letter to classic games, having spent his childhood in arcades. “When I wasn’t there, I was at home playing Atari and Nintendo, all the classics. These games are all impossible. You can keep playing as long as you pop quarters in. There is a certain way those games work. Your problems are solved, and you blast monsters; there is never a doubt that the hero is going to win. With this, I wanted to retell a classic European story in a distinctly American way. It’s a retelling of the Gryphon feather fairy tale through what it’s like to be a Gen X American.”

He wrote the film in 2009, but it sat awhile before he was to bring it all the way through to fruition. It took about two years, with Maloney chipping away at it on trips to Barcelona, before bringing it back stateside and polishing it off.

Interestingly, for a filmmaker known for animation, he is not a fan of the full-length features of the genre. He’d rather stick to short films. “Animation is like chocolate cake — super dense visually. It’s fatiguing to see 90 minutes of how much a dog knows about life or some ridiculous feature for kids. Short form is the best way. Animation is to live action film what poetry is to a novel. All the best animators make shorts, between five to seven minutes. It’s very style forward, like a haiku.”

The 20-minute I Snuck Off the Slave Ship — a collaboration between Atlanta visual artist, musician and star of the film, Holley, and filmmaker Moussavi — closes out the short film programming block. The Chicago-based Moussavi saw Holley perform in New York and was blown away by the artist’s rich lyrics and visuals. After the two met last year, Moussavi found out about the titular song Holley had recorded, and the two decided to make a film out of it.

Matt Arnett, Holley’s screenwriter, producer and 30-year collaborator, feels what Holley has done with the song is “some of the most epically beautiful music anyone has ever made.” The greatest challenge for the team was deciding how best to adapt it and convey its message. “We wanted to try to stay out of the way of the words and music and do something that helped push the narrative along without trying to adhere too closely to it,” Arnett says.

Funding for the film was a challenge — enthusiasm was high on set, but money was low. Nevertheless, the crew was able to complete it, and I Snuck Off the Slave Ship ended up being featured at this year’s Sundance Film Festival. Holley is proud as an African American to be able to be part of such a meaningful project.

Adler, too, will get a kick seeing Gatito with friends and colleagues — and feeling the embrace of the filmmaking community. “Atlanta is growing, and it’s exciting,” she says. “There is strong support for female filmmakers and men who want to support them. That has been lovely to see.”