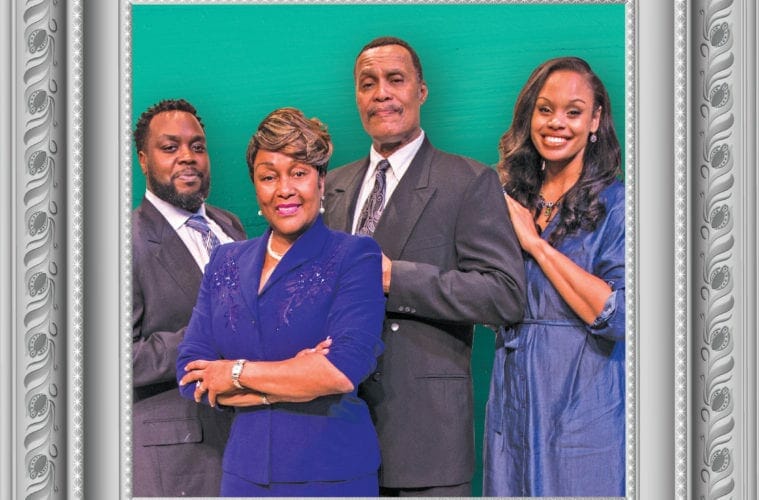 One half of the battling Beckford family (from left): Enoch King, Jen Harper, LaParee Young and Brittani Minnieweather (All photos by Casey Gardner)

Horizon Theatre’s Sweet Water Taste begins in rural North Carolina during Obama’s presidency. Elijah Beckford (LaParee Young), a black Southern funeral director, is having a heart attack. After paramedics return him from the light, Elijah becomes obsessed with his final burial in the Beckford family cemetery. Only problem: The cemetery has been whites-only for generations, and Elijah’s cousin, Charlie Beckford (Chris Kayser), refuses to integrate without a fight.

The play’s premise has the potential to be an incredibly uncomfortable two hours of modern-day racism, but Gloria Bond Clunie’s script provides plenty of wonderful comedic moments to ease the tension. Even the most dramatic and emotional moments involve situational humor that keeps the stakes high yet hilarious.

The comedy, onstage through August 25, features an excellent and well-established cast of Atlanta actors, all returning to the Horizon stage. Young has been performing in film and onstage nationally for more than 40 years. Jen Harper (playing Iola Beckford) has spent 30 years in Atlanta theater. Chris Kayser was a Georgia Shakespeare Company member for more than 20 years (and the Alliance Theatre’s longtime Ebenezer Scrooge). The rest of the battling Beckfords (from left): Chris Kayser, Lala Cochran and Justin Walker

Both men give strong lead portrayals, but the standout performances come from Harper and Lala Cochran (playing Elizabeth Beckford) as their wives. The women, in supporting roles, display perfect comedic timing. As the play’s events unfold and the husbands remain inflexible, the wives build a bridge between the families and put order back in the house.

Sweet Water Taste introduces each couple through an amusing marital spat. Iola tortures Elijah by enforcing his post-heart-attack cracker diet while dangling her juicy fried chicken in his face. Elizabeth tears into Charlie for destroying her flower garden to such an extent that he buys her apology tickets to Hawaii. These scenes establish the dynamics of each relationship while demonstrating the similarities and race-specific traits of each family. Iola and Elizabeth continue to parallel as they commiserate and bond, slowly, over their headstrong husbands.

The married couples, especially real-life spouses Young and Harper, sculpt believable, relatable and uproarious relationships. They play people we all know, allowing the audience to see the years of love and frustration that connect them. Their relationships with their grown children, on the other hand, feel more forced.

The children, despite being adults, make almost no difference in their parents’ arguments. Charlieboy, the white junior Beckford (Justin Walker), for instance, has a chance to change the narrative regarding Elijah’s burial but does not.

Sweet Water Taste uses its characters’ flaws for humor but, unfortunately, never lets them grow. An eventual compromise achieves little, and we’re left wondering what lessons we might have learned.

Clunie’s development of her male characters can be clunky, producing an overload of argumentative text. Director Thomas W. Jones II, a frequent Horizon collaborator, combats the excessive verbiage by stressing a fast pace. His actors often must choose between clarity and keeping up.

Overall, the cast of Sweet Water Taste — which includes familiar faces Enoch King and Brittani Minnieweather — tells a winning story. All Southerners can appreciate the content, which gives us a chance to chuckle at our own hypocrisies.