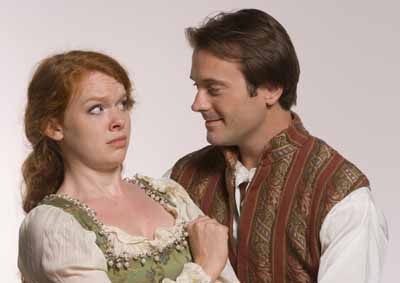 When you walk into the theater for Georgia Shakespeare’s energetic but uneven “A Midsummer Night’s Dream,” the actors are already onstage playing, well, actors. In the minutes before the curtain, they chat with each other, check their makeup in brightly bulbed vanity mirrors, etc.

Ah ha, you think: a warts-and-all, backstage approach to “Dream.” Well, yes, no… maybe? I could never really nail down the idea here. I don’t think director John Dillon could, either. Whatever he had in mind, the concept never coheres.

The show unfolds on a largely barren stage, the notable set pieces being canvas flats on the upstage wall, their backs turned toward us. Makes you wonder: If the action is happening in front of us, what’s supposed to be beyond those flats, where the “real” stage presumably is? Is what we’re seeing supposed to be a rehearsal? Or what? An unclear premise like this provokes niggling questions.

A few years ago, some hipsters refashioned “Dream” into a disco-era extravaganza and christened it “The Donkey Show.” The GaShakes production could be titled “The Casters Show,” because anything with wheels is used to roll the actors around the stage: Canvas storage bins, clothing racks, dollies and handcarts, industrial scaffolding.

Why? And why, as well, the wheeled office chairs, which the smitten Athenian lovers (Hermia, Lysander, Helena, Demetrius) whirl upon as they crisscross the enchanted forest? The mix of objects and modes of conveyance seem arbitrary –less the artifacts of a theater’s backstage than a jumble of items from a warehouse. (Upper photo, Sarah M. Johnson as Hermia swinging from rope, Joe Knezevich as Lysander and Daniel Thomas May as Demetrius.)

All this motion sometimes comes at the expense of verbal clarity and the simpler pleasures of the lovely/silly story Shakespeare wrote for us — about those four mismatched lovers, the battle royale between fairies Oberon (Mark Kincaid) and Titania (Tess Malis Kincaid), the potion-wielding hobgoblin Puck (Michael Bradley Cohen) and the band of dreadful amateur actors, led by hambone Bottom (Chris Kayer), who gets magically translated into the fairy queen’s ass-headed inamorato.

Overall concept aside, the show has a couple of badly judged moments that shouldn’t have made it to opening night. When Hermia and Lysander confide to Helena their plan to elope the following night, why do they strip to their undies in front of her and wrap themselves in blankets? And why, bless her heart, does poor Helena have to finish the scene, delivering her lines while picking up their shed clothes?

Sydney Roberts’ costumes are a grab-bag — some lavish to the edge of gaudy (Athenian duke Theseus’s royal duds recall that scary Burger King), others utilitarian (drab janitorial jump suits for Bottom and his troupe). Again, the inconsistency raises questions about the unifying vision. Wearing a red codpiece and longjohns with fabric fish scales sewn on his pants legs, Puck looks like the lead of some ’70s musical you might have found playing down the street from “Godspell” and “Pippin.”

In fact, this “Dream” sometimes verges on the bare-bones aesthetic of Grotowski’s Poor Theater (or its flower-powery ’70s counterpart, Story Theater). But there’s too much extraneous stuff thrown into the mix to work on that level. The production makes you want either a whole lot more, or a whole lot less — spectacle or asceticism. The middling ground where it exists makes some of the choices look more like a matter of penny-pinching than artistic design.

And a little more magic would be nice. I mean the mood and poetry that Shakespeare’s language delivers — the mystic bowers that can’t physically be created onstage, but can be evoked through rhythm, stillness, music, lighting. (Mike Post’s lighting design is pretty flat.) Parents with kids in the mood for stardust and fairy wings need to lower the wee ones’ expectations, though the frenetic wheeling around onstage might hold their interest.

Georgia Shakespeare’s intern acting program is one of its strengths as an institution. (TV and film’s Jennifer Garner and Carrie Preston spent time here in younger years). It can also be a source of unevenness in performance. There’s often a noticeable difference between the drive and focus of more seasoned actors — like Daniel Thomas May and Joe Knezevich, making adorable fools of themselves as Demetrius and Lysander — and younger ones still underpowered in their technique. But that’s just the nature of the beast.

I don’t mean to sound too harsh. This “Midsummer” flows along fluidly, peppered with expert moments from veteran actors. A few tiny things Tim McDonough does in his small role as Snout the Tinker had me howling. (Full disclosure: I’ve collaborated with Tim on several shows in the past, but still…)

McDonough is one of the ingredients in that unbeatable theatrical dessert: Bottom and company’s performance of “The Most Lamentable Comedy and Most Cruel Death of Pyramus and Thisbe.” Fantastic as Bottom throughout the show, Chris Kayser tops himself with a stagey death scene (complete with self-dismemberment) that’s an epic of ecstatic hammery. Kayser turns the role into the comic equivalent of “Hamlet” — a part that only the very best actors deserve. Though a mixed bag, the show jolts alive with moments like this. It’s worth seeing if only because, well, “Dream” is one of Shakespeare’s loveliest soufflés, and this production has riotous moments and a big heart.

It just happens to reflect a decades-old, global trend regarding Shakespeare productions. Directors feel obliged to make a personal mark, overlaying some sort of concept (“Macbeth” in a subway station, a Kabuki “King Lear”) whether it suits the text or not. Maybe the problem here is that this production’s concept seems to be only halfway there. Shakespeare can be beautifully illuminated by a smart reinterpretation. But the vision needs to be clean, clear and consistent. It’s not enough for a director to lure us with an eye-catching come-on, like the opening setup of this “Dream.” He also has to know how to establish the rules, and how to follow through. That’s when real magic happens.