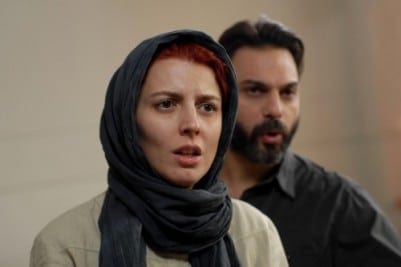 The title and setup of the exhausting — and terrific — “A Separation” are a bit of a fake-out. The Iranian film is about so much more than a divorce. Yes, we first meet Nader (Peyman Moadi) and his wife Simin (Leila Hatami) as they argue in front of a judge about ending their marriage. She wants to leave the country, has a visa that gives her only 40 days to do so, and wants to take their daughter, Termeh (Sarina Farhadi), with her.

“Does your husband beat you?” the judge asks. “Is he an addict? Does he refuse to give you a household allowance?”

No, Simin replies: Nader is a good and decent man. And yes, we soon see, he is. So are most of the people in “A Separation.” Yet they’re also, possibly, capable of self-deception and bad behavior, whether intentional or not.

This is where writer-director Asghar Farhadi’s Oscar nominee for best foreign-language film and original screenplay is, in a good way, exhausting. Unlike 99 percent of movies that make it to the screen, this one shows us characters with deep flaws — flaws that don’t, however, detract from their owners’ sympathetic qualities. These are real people, who find themselves entangled in complex ethical and emotional situations.

Simin, a schoolteacher, is seeking divorce because she wants a better life for her daughter than can be found in Iran, with its religious, social and gender-based strictures. Nader, who works at a bank, doesn’t want to leave the country and refuses to let his wife take their daughter. He has — as all the characters do — his reasons: his father, who lives with them, suffers from Alzheimer’s disease and can’t be abandoned.

This is all just prologue. To say much more about the film’s central plot would be to diminish its ability to surprise with a storyline that, on bare synopsis, might seem melodramatic. Instead, it’s engrossing, repeatedly asking us to recalibrate any easy judgments we make about a character and his or her actions. More than anything, “A Separation” reminds me of the late Polish director Krzysztof Kieslowski’s 10-part 1989 TV series “The Decalogue,” an extraordinary and subtle exploration of the Ten Commandments. (Please put that on your Netflix list, pronto.)

The strong cast includes Sareh Bayat as a somewhat backwoods housekeeper (as compared to the central couple’s more cosmopolitan approach to life), Shahab Hosseini as her hot-tempered husband, and tiny Kimia Hosseini as their four-year-old daughter, silent witness to the grown-ups’ drama. (In a movie driven by long scenes of conversation, one of its strongest moments is a wordless one: the girl locks eyes with the adolescent Termeh, a glance filled with the sort of shared suffering no one so young should have to experience.)

If these words make “A Separation” sound way too heavy, I apologize. This movie is a must-see.