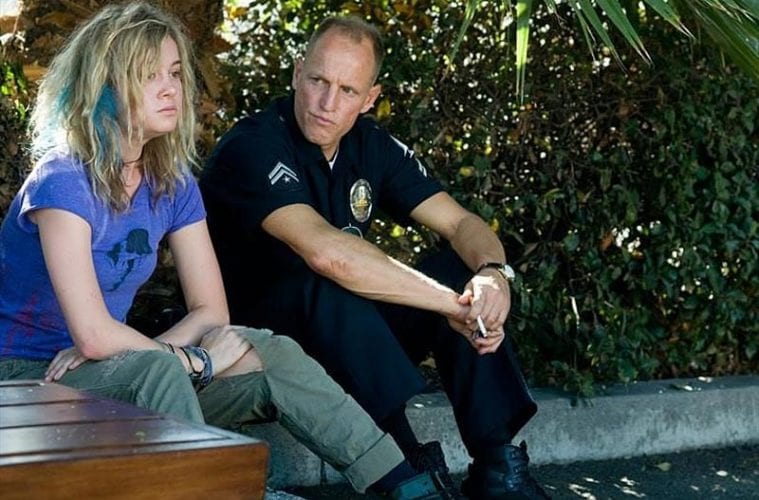 Dave Brown (Woody Harrelson) smokes, drinks and does drugs but rarely touches food. The one time we see him eat in “Rampart,” he gorges — then pukes it all out. It’s as if nutriments, or anything else most people would consider healthy, are automatically rejected by his system.

Even before he’s caught on videotape beating holy hell out of a stranger, Brown is dragging around more bad karma than one man should generate in a lifetime. Well, of course he is: he’s a Los Angeles cop. A Los Angeles cop in 1999, when the city’s police department was mired in the dirty-cops-and-gang-bangers scandal that gives “Rampart” its name.

The Rampart scandal itself doesn’t explicitly factor into this blistering character study, which just as easily could have been called “Badder Lieutenant.” It’s the general background of corruption that Dave represents. Though it’s not as labyrinthine in its plot, the movie’s focus on a salty tug of war between corrupt cops and a district attorney’s office trying to clean things up may remind you of “L.A. Confidential.” There’s a reason for that. The script is co-written by novelist James Ellroy, that chronicler of Southern California crime.

I had one of my oddest-ever interviews with the surly, self-styled Demon Dog when he was shilling for the terrible film version of his book “The Black Dahlia.” But who cares if the man’s a weirdo; he knows how to write great riffs. He’s well matched by co-writer and director Oren Moverman (“The Messenger”), who gives “Rampart” snappy editing and visual rhythms to match the language, and he casts each role smartly.

Take Dave’s home life. He lives — well, “crashes” may be the better term — at a compound consisting of two side-by-side houses, where his two ex-wives, who happen to be sisters, live with Dave’s two daughters. They’re played by Cynthia Nixon and Anne Heche as smart survivors of their time with Dave. They’re still susceptible to his jagged charisma, but they’re not crazy.

Sometimes Dave still winds up in bed with one of them. More often, he’s at a bar pounding down shots and hooking up with someone new — such as Linda Fentress (Robin Wright), a blonde as hard-drinking, prickly and untrustworthy as Dave himself.

If Dave’s private life is chaotic, his professional one is worse. He’s a citywide poster boy for LAPD brutality, thanks to that videotape, and soon he’s also connected to a robbery at a high-stakes card game, which he should have been nowhere near.

Dave’s actions are forever in conflict, as if he’s daring the world — from his ex-wives to his superiors, including a lawyer from the DA’s office (a very strong Sigourney Weaver) — to bust him. He’s an addict by nature, a thrill junkie, but he doesn’t really seem to know what it is that might really satisfy him — besides, maybe, being caught, losing everything and having to start from scratch. But keeping that catastrophe from happening is what gives him his truest thrill. It’s a disastrous game he’s playing. And a fascinating one to watch.

During a punchy verbal duel with Weaver’s character, Dave tells her exactly what will happen if he lands in court: he’ll emphasize his service in Vietnam, his 24 years on the job, and he’ll end up with his own show on Fox News. It’s a glib riff, full of Ellroy’s staccato vigor, but who cares if it sounds like written dialogue when it’s dialogue this good? Harrelson brings to the role a sinister/sexy force. What makes his performance so interesting is that he still carries the innate amiability he’s had since he was a kid on “Cheers.” He makes us like Dave, even at his worst.

The film is packed with terrific actors, including Steve Buscemi, Ben Foster and Ned Beatty in supporting parts. Even the small role of a one-night-stand is filled by estimable Broadway star Audra McDonald, who should spend more time on camera. It’s one of the many contradictions in Brown’s character that he would sleep with this black woman while being baldly racist in his other dealings with the world, especially toward an investigator working for the DA (Ice Cube, in another bit of canny casting). Dave is also a terrible sexist who happens to love women as much as he hates them.

Near the end of “Rampart,” Dave’s younger daughter sees, for the first time, what a real mess her daddy is. “You want me to give you some kind of way out, so it doesn’t hurt so much?” Dave asks her. “There’s no way out. . . . I can never change.” That, in the end, may be the greatest strength of “Rampart”: it has the clarity of vision to follow Dave Brown into his daily heart of delicious darkness, then refuse to give him, or us, the usual Hollywood lie of redemption.