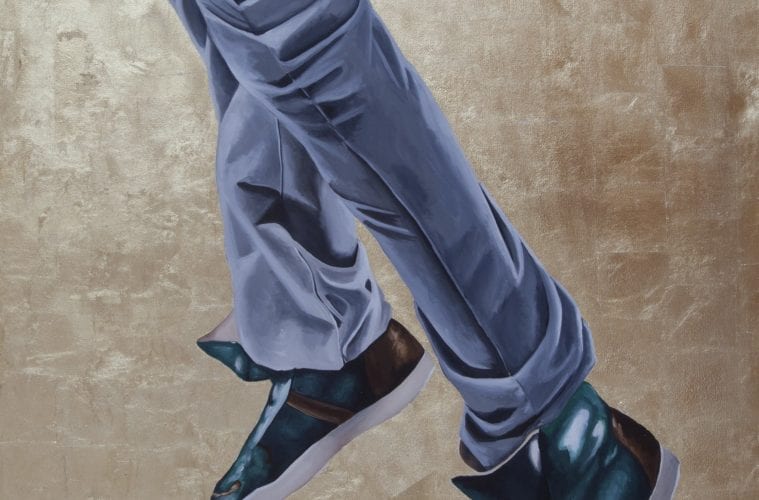 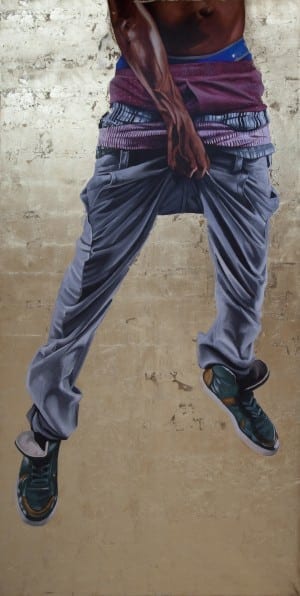 On December 15, about 50 well-attired African American men gathered before the federal courthouse in Los Angeles for a silent vigil in support of Michael Brown, Eric Garner and countless other black men who have fallen victim to police brutality in America. The vigil, called “Suits in Solidarity,” was also intended to address racial profiling of black men of all backgrounds, regardless of age, class, education, economic standing or level of so-called professionalism by the American penal system.

While a moving demonstration, the emphasis on manner of dress for these peaceful protesters is complicated. While refuting a racially charged socio-economic stereotype for American black males, it also begs the question: Do black men have to wear suits in order to be considered respectable, law-abiding citizens?

Fahamu Pecou, a winner of this year’s MOCA GA Working Artist Project, addresses pop cultural representations of blackness and the manner in which they inform black male mobility, agency and masculinity. Through drawing, painting and sound works, his current show Grav•i•ty, on view at MOCA GA through February 14, isolates the phenomenon of saggin (slang for wearing pants below the belt line) as a deeply politicized fashion statement in black youth.

To say the least, the phenomenon is a contentious one, and blurry in its origins. Legend has it it originated in American prisons as a means of sexual solicitation between cell mates, or simply because belts weren’t allowed. It was eventually adopted into the hip-hop mainstream where it flourished, endorsed by celebrity culture.

But many find the style offensive, considering it desperately lacking in personal integrity, or a misguided embracing of gang or prison culture. “Raise your pants, raise your image!” reads a billboard in New Jersey, where a few cities have outlawed the trend. In Atlanta, Morehouse College students are required to uphold a dress code, which prohibits sagging pants in the classroom.

Many are quick to admonish, but few probe deeper to ask the more relevant question: Why? For Pecou, the phenomenon, while also an impediment that breeds stigmatization, is more than an empty fashion trend propagated by cultural icons, or worse, a romanticization of criminal behavior.

Inasmuch as clothing can make proclamations of who we are and what we stand for, this so-called inappropriate fashion trend is, in fact, a deliberate “demand to be seen,” a way of making oneself visible in a society in which generation upon generation of black men are largely dismissed and overlooked.

As a politicized signifier of cultural identity and dissent, the trend resists certain “hegemonic readings of acceptability and decency,” according to MOCA GA’s curatorial statement, and stems from a larger, desperate need for individuation, self-expression, agency and ownership of difference. In this way, saggin has everything to do with fashion and nothing to do with fashion. It is a lifeline for some, but as evinced by recent tragic events, it can also be a death sentence.

A poetic rumination, Grav•i•ty is stitched together by the artist’s delicate threading of language throughout the exhibit, which plays with gravity as a concept while simultaneously imagining its antidote. Gravity’s downwardness not only points to sagging pants, but to notions of immobility, heaviness and encumbrance.

The show’s equal emphasis on verticality and upwardness is more than poignant by contrast, converting the difficult space of MOCA GA’s main gallery into a resonant, cathedral-like nave, dedicated to reflection and imagined transformation.

“What if we believed in black boys instead of belittling them? Could they . . . Would they fly?” asks Pecou.

In Rising Down, for example, a title astutely emphasizing the inherent contradiction of saggin as both empowering and restricting, Pecou offers a game of wordplay to lead the viewer through his train of thought. In Basquiat-style scribbling and crossing out of words, the language reveals both agency and doubt: “UP RISING DOWN / APPRISING DOWN / APPRISING DOUBT / A PRIZE IN DOUBT.”

It’s such simultaneous opposites — of the burdened and the sublime, weight and weightlessness, pressure and release — that makes the experience of the work so moving, and among very few contemporary bodies of work brave enough to tread such waters.

While Pecou frequently paints himself as a character in his works, such images rarely read as first-person narratives. (But of course, each work is most certainly about Pecou as representative of a collective identity and problem.) A suite of four graphite portraits extend the length of one gallery wall. Inundated with Pollock-like paint splatters, Pecou’s characters seem asphyxiated, tethered by tendrils of dripping paint and roving pencil lines that extend beyond the frame of the paper.

At the height of Pecou’s “nave” sit two magnificent gilded icons, Black Boy Fly and But I’m Still Fly, as if pulled from the walls of Byzantium. With a similar regality and larger-than-life magnificence as Kehinde Wiley portraits, the pair of figural paintings each depicts a young black man (after the artist himself) from the chest down leaping in midair. The vertical orientation points upward, smartly emphasized by one painting sitting a few feet higher on the wall than the other. They’re exquisite in their application, weightless in the air like winged deities.

Like David Hammons’ Higher Goals, these works recall the language of athleticism, as it’s been inextricably linked to blackness via pop sports culture, the NBA, black basketball celebrities and sports name brands like Nike’s airborne “swoosh” popularized by icons like Michael Jordan among others. 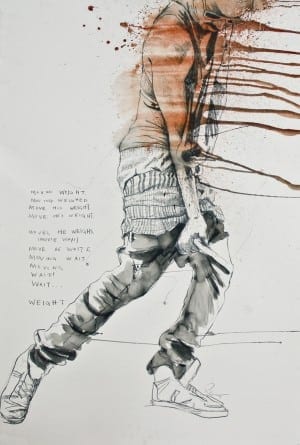 While Hammons was perhaps encouraging young black boys to pursue higher goals in life besides basketball, he also created a hoop too tall to ever reach. Similarly, Pecou hones the idea of upward mobility itself, emphasizing its sublimity while also critically engaging the inevitable glass ceiling that restricts it.

And if it weren’t enough, echoing throughout Pecou’s inner sanctum is the artist’s own Janet Cardiff–style sound piece to the tune of flight. In Sky Is the Limit, we hear various musical remixes that blend gospel music, rap lyrics and ephemeral synthesizing effect. The loop is at once potent, ironic, rousing and sad. Pecou includes variations of “Black Boy Fly,” the lyrics and song title by Compton-born artist Kendrick Lamar. The hit song chronicles the artist’s envy of his young black schoolmates who escaped the miserable reality of their upbringing: “I wasn’t jealous ’cause of the talents they got, I was terrified they’ll be the last black boys to fly out of Compton.”

Even more potent is gospel a hymn, “I’ll Fly Away,” which Pecou incorporates as yet another means of defying gravity. Yet this feat, despite its exuberance, is one that only comes with death, as the hymn describes in its fullness (though not incorporated into Pecou’s piece): “When I die, hallelujah, by and by, I’ll fly away.”

In light of the fates of Michael Brown, Eric Garner and Trayvon Martin, among others who were unable to escape the racial vulnerability into which they were born, Pecou seems to be asking: Is death the only escape from this inevitable gravity?

In an age in which contemporary art continues to reach unprecedented international visibility and popularity, few artists actually engage in the luxury of this global platform as a vehicle for social activism.

German philosopher and political theorist Herbert Marcuse argued, “The world formed by art is recognized as a reality which is suppressed and distorted in the given reality.” By challenging the established reality, art has the potential to remind people of what has been buried. In this way, Pecou excavates young black men from the gravity of social invisibility, allowing his audiences to envision their unencumbered flight.