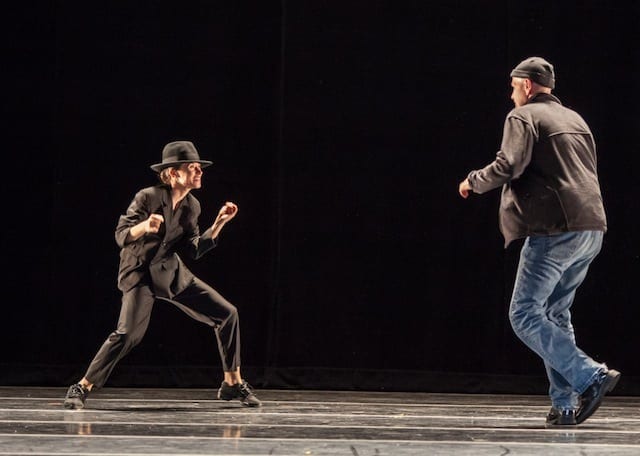 Essay: The night I danced with Atlanta Ballet and caught a flying ballerina

I went to the dress rehearsal for Atlanta Ballet’s “New Choreographic Voices” Thursday night to live-tweet, not to dance.

I was stationed in the front row at the Cobb Energy Performing Arts Centre — an advantage of being at the dress rehearsal — with a tweet on my phone ready to send out. The ballet had already performed the first two works on the bill and was now in the middle of a piece called “Minus 16.” I’d just written, in 140 characters or less, about a dazzling duet between Rachel Van Buskirk and Jonah Hooper.

Before I could send out the tweet, my attention went back to the stage. About 20 dancers came out, all dressed in black formal men’s evening attire, complete with fedoras. Heavy, uptempo electronic music pounded as they formed lines on either side of the stage.

I knew what was about to happen — at a rehearsal I’d attended over the summer, this was the exact moment when a gorgeous ballerina had suddenly appeared before me and extended her hand. At first, I had been very confused about what was going on. Then I realized that others in the small audience were also being pulled onto the rehearsal floor and were dancing with Atlanta Ballet’s dancers. Part of the choreography, I learned later, is to bring up audience members to dance.

OK, no pressure there, right? I can move in rhythm to the beat, but then what? I received exactly two days of dance lessons when I was in sixth grade, and it was not exactly the most positive experience. The ballerina had tried to lead me through some very basic dance moves, but I had had no clue what to do. I felt inhibited, restrained and clunky. I receded back into that awkward kid from the sixth grade.

That memory flashed as I watched the dancers walk off the stage toward the auditorium. I felt both relief and disappointment as I realized that I wouldn’t be dancing tonight — the dancers were all focused forward, out into the arena, not on the very front rows.

But the very last ballerina in the line to my right suddenly turned her head and looked at me. Our eyes locked and, in character, she started a very slow and seductive walk down my row of seats. In the darkness, I didn’t recognize her at first. As she approached, I realized it was Nadia Mara, a lovely young dancer from Uruguay.

She moved with slow dance steps until she was close enough to elegantly offer her hand to me. I nodded and stood. An understanding was reached. She took my arm and very formally led me up to the empty stage. 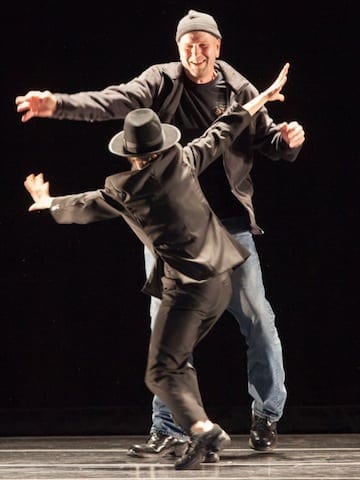 She raced out into the middle of the floor and burst into dance, and I followed. I was very aware that we were the only people onstage. But I caught the rhythm of the music and tried to lose myself in the moment. Nadia smiled approvingly, as if to say, “You’re doing great.” Our eyes stayed locked. We fell into synch. She led and I followed. Nadia kept it simple. It was all high steps and flailing arms, simply letting go to the groove.

We were dancing near the back of the stage when she reached out and we clasped hands, moving our feet in unison. Nadia smiled. Without warning, she suddenly stepped forward and boldly leapt into the air.

The next thing I remember, she was gently resting in the crook of my arm, just off my right hip.

I somehow caught her.

Not only did I not drop her, but I let her momentum carry into a dance move. I cradled her in the air for four beats, then she was back on her feet. And in that instant, I stopped thinking about what I was doing. I surrendered to the moment. It was as if my inner child had shoved aside the self-consciousness I’d felt at the rehearsal. I was released from adult inhibition. I began to dance, to dance as if no one was watching.

Nadia reached for my right hand, raised it over her head and spun. She took my hand and came forward, then leaned back until both our arms were extended. She moved her left foot forward and I moved my right foot back. Even when it was over and we were all lined up at the front of the stage to acknowledge the audience, Nadia and I were still in our dance, gently moving and bumping our hips against each other.

It was both exhilarating and liberating, a mad rush of adrenaline. A friend who witnessed the moment said the smile on my face was the most genuine thing he’d seen in a long time. No wonder. Thursday night, I got back in touch with my inner child. And what child doesn’t dream of someday catching a beautiful ballerina?