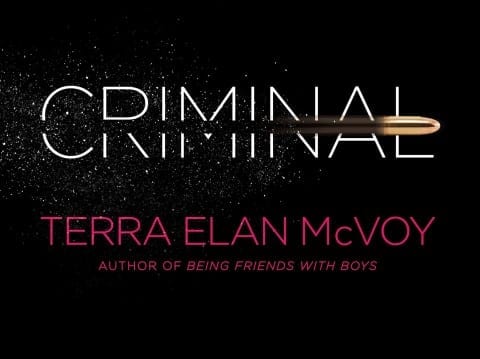 Atlanta author Terra Elan McVoy has always addressed topical issues in her bestselling Young Adult novels, but Criminal (Simon Pulse 2013, 288 pages), the most compelling yet, thrusts her writing into dark new territory of murder and vengeance.

Criminal is a coming-of-age story about Nikki, a teenager so obsessed with her boyfriend, Dee, that she cannot recognize him for who he is or who she is becoming. McVoy has mastered Nikki’s young, brittle emotions to tell a sleek tale of crime, punishment and redemption.

ArtsATL conducted the following interview by email with McVoy, who will appear at the Decatur Book Festival on September 1.

ArtsATL: How did the idea for Criminal come to you?

Terra Elan McVoy: In 2012, I heard about a murder case in which a young man was accused of killing one of his girlfriend’s parents, out in broad day. When I discovered that he had an accomplice — another young woman with whom he’d also been romantically involved — I was even more intrigued. Not just the shooter himself, but more that second girlfriend, the one who allegedly helped him do it. Who was she? Why did she go along with it? Did she know about his other girlfriend? And what happened to her after the fact? My mentor at Florida State University, Mark Winegardner, said once “Write what you most want to understand,” and that’s what started my writing Criminal.

ArtsATL: Is there any risk involved with a narrator who is not instantly likeable?

McVoy: There certainly is. . . . Many readers will abandon your book because of it, and several people have reviewed Criminal negatively because they can’t get over Nikki’s shortcomings. But this book, for me, was always about trying to understand someone I wouldn’t necessarily like. I think it is so easy to judge and condemn people who do things we wouldn’t ourselves, or who make choices that are clearly bad for them. But we’ve all been in that boat, just maybe not in such extreme ways. So I wanted to really understand Nikki as a whole person, not just someone I judged and dismissed.

ArtsATL: Why are you ambiguous about Nikki’s ethnicity?

McVoy: It’s a story about having a lack of strength in yourself, and that can happen to anyone, no matter what the color of his or her skin is.

ArtsATL: Do you think betrayals are a necessary part of growing up? Nikki is her own worst enemy. What is harder, navigating friendship with others or learning how to be a good friend to oneself?

McVoy: Part of growing up is learning to see things from a fuller, more informed perspective, and sometimes that can be difficult. Seeing your parents as people, for example, can feel like a kind of betrayal, whether your friend ever stabs you in the back or not. I think both things can be difficult, and have their own challenges, but self-care seems to be the hardest for people of all kinds to master. I’m sure all of us know at least one person who has way more going for herself than Nikki does and who still doesn’t know the best way to be her own friend.

ArtsATL: I wasn’t quite sure whether Nikki does what she does for the sake of truth and justice or revenge.

McVoy: I don’t think Nikki ever makes choices based on lofty, abstract ideas like truth or justice. She makes decisions based on what she feels is best and right for her; it’s just that those things shift over time during her story, because of what she learns and how she grows. ArtsATL: What distinguishes a YA from an adult novel? Is there any topic off-limits in the YA genre?

McVoy: As my editrix Anica Rissi so aptly explains, Young Adult is not a genre but a perspective. The books in YA are not necessarily for a particular set of eyes but are told through a particular set of eyes, a teenager’s. For me, that is the prime difference between YA and adult. There’s never been any rule that says teenagers can’t read “adult” books and adults can’t read “teenager” books; that crossover started in 1951 with The Catcher in the Rye. I don’t think there’s any topic off-limits in a Young Adult novel, so long as it’s being narrated from the position of someone between the ages of about 13 and 17.

ArtsATL: What did you read growing up? Any particular influences?

McVoy: My mom read out loud to my sisters and me every night, and our favorites were the Oz books by L. Frank Baum, plus the later ones by other authors like Ruth Plumly Thompson. I also discovered e.e. cummings in middle school, and both he and Emily Dickinson became great influences on my own poetry. Of course in high school I read my share of Stephen King (I preferred the short stories), and I very clearly remember reading The Prince of Tides in my high school library and thinking, “I want to learn how to make sentences like this.”

McVoy: In my adult life, I’ve looked to short story writers Alice Munro and Lorrie Moore, as well as Jean Thompson and Raymond Carver for guidance on how to write a tight, realistic narrative. Novels that have awed and educated me include 11/22/63 by Stephen King, Freedom by Jonathan Franzen and The Night Circus by Erin Morgenstern. My very favorite book of all time is All the King’s Men by Robert Penn Warren. A Prayer for Owen Meany (John Irving), The Wrestler’s Cruel Study (Stephen Dobyns), Oscar and Lucinda (Peter Carey) and Gone With the Wind are also up there in the top 10.

McVoy: Right now I’m actually waiting for my new editor to send his notes on the draft of my sixth novel, In Deep, which will come out in summer 2014. This one is about a competitive swimmer who lets her drive to win interfere with her personal relationships. I’m excited because it’s revisiting a character from my third novel, The Summer of Firsts and Lasts, which was a lot of fun to do.

ArtsATL: You served as program director of the Decatur Book Festival for two years. What are some of the challenges? What will you miss most?

McVoy: Working for the Decatur Book Festival was an enormous opportunity for me, for many reasons. I was part of it from the very beginning, volunteering to coordinate the children’s programming with Diane Capriola at Little Shop of Stories. Growing my position with the festival as it has grown was very special, and the festival is and will always be close to my heart.

A huge challenge is to create programming that appeals to every kind of reader, not just those who read what I read. To make the festival timely, fresh and dynamic and stay within the budget limitations was also always a good challenge, and navigating the needs of 300-plus authors, plus volunteers, publicists, booksellers and sponsors, always made things interesting. But I always had terrific people working with me, from the programming committee to the interns (not to mention the staff), so that was a big help. In fact, it is the people I miss the most so far.

Responding to a zillion emails a day and being on call through the entire summer? Yeah, I’m not missing that.