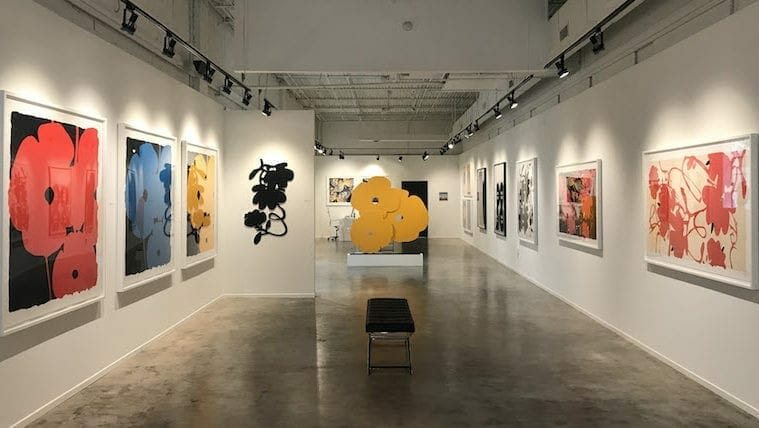 A gallery view of Donald Sultan's paintings, often made with industrial materials, at Maune Contemporary.

Cullum’s Notebook: The art shows must go on — usually virtually or by appointment

Please note that many art galleries remain open amid the COVID-19 pandemic — but only by appointment or with online offerings. Most have canceled receptions and artist talks. It’s best to check ahead before you go. This notebook is a monthly survey that highlights some of the more notable art + design happenings in metro Atlanta. Jerry Cullum has written about art + design in Atlanta, and beyond, for decades.

“The tree which moves some to tears of joy,” William Blake wrote, “is in the eyes of others only a green thing that stands in the way.” Blake went on to say that “to the eyes of the man of imagination, nature is imagination itself.”

Art, of course, has a much more tangled relationship with nature, just as it does with the issue of what “imagination” is. Trees in art, to take Blake’s example, range from exact representations in paint to abstract references to actual trees moved into a gallery. Three Atlanta exhibitions now at Atlanta galleries deal with the first two options. Eileen Braun’s sculptures in Questionable Origins, at Spruill Gallery through April 25, combine the shapes of seed pods, embryos and subsequent forms from biology and botany textbook illustrations, presenting an impossible life cycle that is neither one living thing nor another. At the same time, the shapes are resolutely pure art. The shadows they cast are as important as the solid linear forms made from rattan, cotton string, fabric and encaustic wax. Bearing such titles as Chrysalis and Nesting Instinct, most of the sculptures allude to biomorphic shapes and developmental processes, but Cactus obviously refers to the world of botany.

Corrine Colarusso’s paintings have long been about finding ways to represent the relationships of nature in paint — which, though it sounds like just another way of saying that she makes pictures of landscapes — is, in fact, something quite different. The title of one new painting in Every Leaf a Shelter, at Poem 88 through April 18, reveals the real, structurally based agenda: Green Mansion (Suddenly a Lilt, a Curving of Certainty, a Cascade, Effervescent Results). Corrine Colarusso’s “Green Mansion (Suddenly a Lilt, a Curving of Certainty, a Cascade, Effervescent Results”) is a 2019 acrylic on canvas that measures 84 by 66 inches. See it and others at Poem 88.

The scene depicted is recognizable as landscape, but the formal relationships among the painterly elements remain subconscious unless spelled out for the viewer, who’s likely to feel only the subjective result of entering into a particularly charged relationship between audience and artwork. Colarusso has said that what the paintings show is not the landscape itself but the space between the painted representation and the person looking at it.

That contrast is apparent between the differently complex works of Braun and Colarusso and the simplified forms that Donald Sultan has made familiar to global audiences for more than 30 years. Sultan has always translated natural forms into outlines, frequently created with industrial materials. Sultan’s entire catalog can be seen HERE and a video tour of his exhibit can be seen HERE.

The black-powder-coat aluminum sculptures in Maune Contemporary’s New York in Living Color (through March 29) demonstrate this more than adequately. Most of the Sultan works in the show, however, are silkscreens overlaid with flocking and something that’s described as “tar-like texture.” (The title has to do with the gallery’s overall range of art, which includes paintings by Ross Bleckner, editioned prints by Alex Katz and Richard Serra, and prints by other established figures ranging from Deborah Kass to Joan Miro.)

In unprecedented times like these, when we are separated by necessity, ArtsATL is needed more than ever. Please consider a donation so we can continue to cover Atlanta’s creative community.