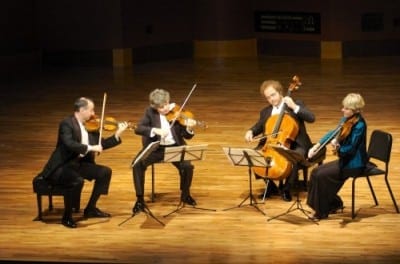 The two most rewarding concert halls in metro Atlanta opened their performance seasons over the weekend. Both are on college campuses far from the city center and draw audiences from across the metro area. One is celebrating its 20th anniversary and humming along near full potential; the other is just three years old and still figuring out what it wants to be.

The venerable first. We’ve written a lot about what Spivey Hall means to Atlanta’s musical scene, with both its excellent acoustics and the international caliber of its programming, for setting the bar so high. There could be no better example than the Takács Quartet’s concert Saturday.

In Schubert’s “Quartettsatz,” a movement that never became part of a completed work, the quartet made Schubert sound like the most imaginative composer of the 19th century, dark and fiercely alive. It played Haydn’s String Quartet Op. 71, No. 3 to the manner born: jocular, witty, wise, chaste and substantive without trying to go “deep.” (Chaste? Mozart’ music is often sexy; Haydn’s is chaste.) Like many people five years ago, I felt as if I’d been kicked in the gut when the Takács’ violist, Roger Tapping, announced that he’d left the group. This is what people must have felt when Paul quit the Beatles. Tapping was perhaps my favorite active violist in the world, the soul of a soulful group, a genius at animating the middle voice. Geraldine Walther, then principal violist in the San Francisco Symphony, took his place, joining violinists Edward Dusinberre and Károly Schranz and cellist András Fejér. (Takács Quartet photo by Patrick Ryan.)

Naturally, the Takács has changed. In Haydn’s second movement, an Andante con moto, each player gets a lyrical solo turn, and what’s fascinating was not how perfectly matched the four voices were but what strikingly different approaches they took on their own. Walther, an ace player with a golden tone, is a more traditional violist than her predecessor: she doesn’t argue as insistently for her instrument. Still a profound ensemble, the balances are a little more conventional. On September 22, in Denver, the Takács gave the world premiere of Daniel Kellogg’s “Soft Sleep Shall Contain You,” subtitled “A meditation on Schubert’s ‘Death and the Maiden’.” The quartet is now pairing the 15-minute Kellogg (in his studio, at left) and its famous Schubert inspiration on a national tour. As Dusinberre remarked, Kellogg’s theme is drawn from the Schubert’s slow movement chorale, where Death is portrayed in a major key and the girl in the minor, “which makes Death all the more terrifying” as an implacable force of nature.

The music follows an atmospheric narrative: grey at the start, slow-moving and blurry, and a few minutes into it we hear snatches of the Schubert, followed by increased agitation and a clotted and choking mood. Suddenly the music becomes romping and swift, then another Schubert quotation, then blurry again with dissonance and some lovely and intricate quartet writing, then back to grey. A very touching, rapturous cello line brings it to an end.

In Schubert’s “Death and the Maiden” the quartet took flight, an interpretation loaded with shape and insight and memory, a three-dimensional reading that sounded fresh and personal. The Takács is the sort of group that realigns the whole community of musicians. It often feels fair and generous to accept each ensemble for its own worth, to level the standards and credit sincere effort. The Takács come to town and reminds you who’s king. And the concert was another reminder that, better than any other concert hall in the region, Spivey knows what it can deliver at the highest level.

Unlike Spivey’s impressive declaration of strength, Kennesaw State University’s Bailey Performance Center edged quietly into its four-event Premiere Series with a recital by pianist Orion Weiss, a 27-year-old Ohio native who is building an important career. Weiss is a quirky artist, a comprehensive musician who’s not entirely polished as a performer. He played an afternoon of miniatures, most of them lesser-known works by major composers. A charming and informal young man, he offered a few words about the music, then told us he’d changed the order of the program. When he was done talking, he turned to the keyboard and said, “OK, let’s go.” Was that to the audience or the instrument? Probably both.

He arranged the program as an elegant palindrome: Dvorak’s populist, folk-inspired “Humoresque,” Op. 101 to open and close, Chopin Impromptus on either side of intermission and, sandwiched in between, taut pocket pieces by 20th-century masters: Dvorak-Bartók-Chopin-Chopin-Prokofiev-Dvorak.

Dvorak’s 1894 “Humoresque” set is based on tunes pulled from folk or Native American songs the composer heard during his stays in New York and Iowa. Weiss’ virtues were immediately apparent. He’s a searching pianist, lucid and rational, with a note-perfect virtuosity that doesn’t call attention to itself. He rarely gets swept up in his own interpretations — as if, instead, he’s making key decisions moment by moment, like a chess master absorbed in the game but always calculating. Without a moment’s pause, he connected Dvorak to Bartók’s 14 Bagatelles, Op. 6, an interesting artistic move although it left many in the audience puzzled about what he was playing.

The Bartók set is often jittery and cubistic, where a folk song is pulled apart, thrown out of alignment — existing midway between realism and abstraction. With knotty technical demands, Weiss dived into the Bartók, hammering the often violent peasant tunes while finding gentle lyricism buried within.

He was fast and a little mechanical in the two Chopin Impromptus, No. 2 in F-sharp and No. 3 in G-flat, but totally persuasive in Prokofiev’s “Visions fugitives,” crafting each of the 20 little episodes into a complete world. One expects to be hearing a lot more from Weiss.