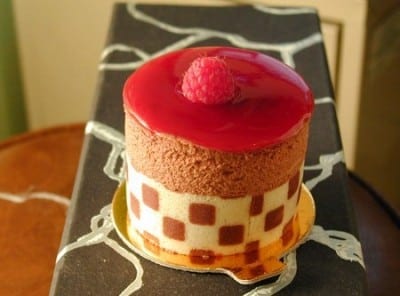 The concert promised to be rich in comparisons, pairing music by composers from two cities: one a medieval center of art, astronomy and music that, more recently, helped destroy the very culture it purported to revere and had to start over from scratch; the other a sprawling new city loaded with ambition, hampered by regional antagonisms and searching for an identity.

Friday’s Bent Frequency concert at the Rialto Center for the Arts was billed as “Atlanta/Nürnberg: Sister Cities in Concert” and was mostly a chance for two academies — Georgia State University and the Hochschule für Musik Nürnberg — to hear each other’s music. That one of the Nuremberg composers is British and one of the Atlantans was born and raised in Germany doesn’t so much confuse matters as downplay the very premise of the collaboration. The show was funded by GSU’s Center for Collaborative and International Arts.

First up was music by GSU faculty. Robert Scott Thompson’s “The Ninth Wave,” from 2001, was inspired by Celtic mythology’s boundary between the natural world and the supernatural. It’s a spookfest for electronics and solo cello, played by Craig Hultgren. At the start you get the sense of swimming, of pushing forward in a thick liquid. The electronics include distorted cello sounds, where Hultgren duets with his ghostly self. An eerie choir adds another layer of mystery and discomfort. A section of pizzacato’d thwacks and musical paranoia — the stuff of TV thrillers — changes the scenery but not the overall feeling of a ghoulish nightmare.

Thompson has sophisticated compositional control and reaches for intense emotions. His music would benefit from a more imaginative sound world. “The Ninth Wave” sounded off-the-rack, clichéd. Written for the Morningside Chamber Musicians — who dat? — the work is a charming neo-classical exercise, with echoes of Poulenc and Stravinsky. Jansa makes the cozy intown Atlanta neighborhood sound like the tree-lined boulevards of Paris in the 1920s. (Alon’s Bakery, the ‘hood’s cultural and spiritual hub, ought to broadcast “Morning Sides” over the loudspeakers. Sales of baguettes and fancy desserts would soar.) The third Atlantan on the program, Nickitas Demos, is the local composer I’d nominate for Most Likely to Become Famous and earn a serious national reputation. His 13-minute “Tonoi I” (1999), for solo viola, was the first in his set of abstract works for solo instruments (now seven in number) and harks back to Italian modernist Luciano Berio’s trend-setting “Sequenzas.”

But Demos’ bold voice is his own. Played by the work’s dedicatee, Tania Maxwell Clements, her viola voice exceedingly lovely and caloric, the music moves along a compelling emotional journey. Like the best of Demos’ music, it’s substantive and accessible and personal, not derived from any “-ism.” After every Demos performance I scratch my head and wonder: Can he push himself to the next level? Then came the two professors who teach in Nuremberg. Nationalities and cultural identity blur with Vivienne Olive, born in London in 1950, educated in Britain, with Australian ties and a conservatory job in Germany. Stuart Gerber played the world premiere of her “Coming of the Anchovies,” an eight-minute plunge into ichthyology.

Written for Gerber on vibraphone, it opens with gentle bell-like rings, just simple chords then the decay, setting up a frame of view. Quiet, reserved and somehow “feminine,” the music envisions little fishes, their silvery scales and darting motions. There are no mood swings, no sudden shark attacks, perhaps no humans in view. Olive finds enormous variety through the simplest of means. It’s a small-scale triumph of creativity, a joy to hear.

The music by Dieter Buwen, born in 1955, comes from the Euro-modern school that admits the jig is up. His music asks: What’s left for a German composer to say? Buwen’s “liberamente e rubato,” from 2004 and here receiving its U.S. premiere, is for flute (Jessica Peek Sherwood), viola (Clements) and harp (Ellen Heinicke Foster). In whispers, silence, soft flutters and wavering chords, the music yearns to speak but never quite manages a statement.

Buwen’s “(T)raumzeit,” another world premiere although the score was completed in 2004, wavers between the dreamtime and spacetime of the title. A GSU quartet — pianist Brandt Fredriksen, clarinetist Kenneth Long, cellist Hultgren and percussionist Gerber — gave an exacting performance. In this context, it’s easy to overreach and contemplate the much-discussed loss of identity suffered by postwar German composers, among other heavy matters. But listened to blind, Buwen’s music probably sounds like angst-ridden, late-20th-century academic composers from anywhere — truly an international style.

For Robert Schumann’s 200th birthday, in a witty idea, several Nuremberg composers were commissioned to re-interpret Heine poems used in Schumann’s song cycle on the many moods of love, “Dichterliebe.” We heard two of Schumann’s songs immediately followed by Olive’s and Buwen’s contributions to the project, sung by the always rewarding Atlanta tenor Richard Clement, with Fredriksen at the piano.

Schumann treats the first poem in the cycle, “Im wunderschönen Monat Mai” (“In the Beautiful Month of May”), as a pastoral scene, of earthy green and ocher and coarse-wool textures. Olive’s version has the tenor sing in a slightly higher tessitura and with an angular, ironic piano part. Nature has been paved over by gray metal and glass. In 2010, it seems, “love” is neither simple nor believable.

Buwen’s take on “Allnächtlich im Traume” was even more extreme. Schumann’s song, a lighthearted, if fraught, dream sequence, comes near the end of his ultimately morbid cycle. Dreams? Buwen prefers nightmares, and the poet-hero of the cycle lives in a dystopia so severe it was hard to take seriously — reminding me of a spoof from The Onion.

A final note: Bent Frequency’s collaboration with Film Love on the movies and music of Maurizio Kagel, which was snowed out twice last winter, has again been rescheduled. Weather permitting, the free show is scheduled for 7:30 p.m. October 29 in GSU’s Florence Kopleff Recital Hall.