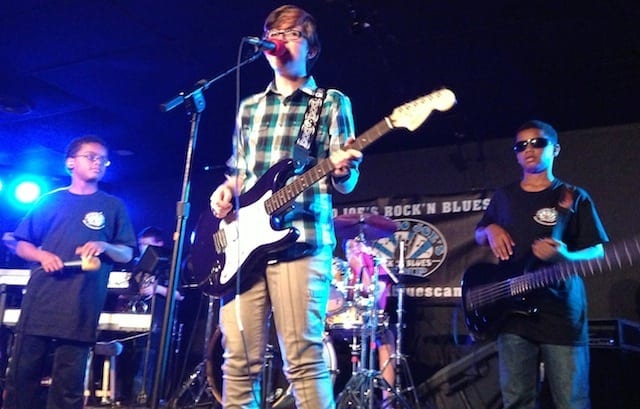 If you’re a fan of the blues and worry about the future of American roots music and whether younger generations will carry on that tradition, you probably haven’t been to the Tin Roof Cantina on a Friday night. That’s when kids from middle and high school come together for a loose, informal jam that pays homage to masters of blues and rock such as John Lee Hooker, Muddy Waters and Jimi Hendrix. All these young musicians have one thing in common: they’ve honed their craft and techniques over the years at Chicago Joe’s Rock ‘n Blues Camp.

On a recent Friday night, the cantina crowd was treated to a rousing, varied mix of standards that included T-Bone Walker’s “Stormy Monday Blues,” Ray Charles’ “I Got a Woman,” Jimi Hendrix’s “Fire” and even the Ramones’ “Blitzkrieg Bop.” With their mentor and instructor, Chicago Joe Jones, occasionally accompanying them or spurring them to improvise, the young musicians often surprised and delighted everyone with their chops. Some, such as bass guitar virtuoso Alexander Hollins, got a solo spotlight and ran with it. No Komment and Scene of the Crime, teenage bands that competed in this year’s Atlanta Blues Challenge, got to work out ideas and timing in a live dress rehearsal. The weekly jams offer solid proof that there are some young bluesmen to be reckoned with in this town.

Among Atlanta musicians, Jones’ music camp has generated an underground buzz and reputation for turning out wildly talented junior players (17 and younger) who can keep seasoned veterans on their toes. One reason is the focused approach offered by the camp, which sets it apart from other “School of Rock” clones that have sprung up locally since the success of Richard Linklater’s 2003 movie starring Jack Black.

There is a commonly held belief among music teachers that students who practice as a group learn faster and develop more advanced skills then they do through solo instruction, and Chicago Joe takes this to heart. His curriculum jettisons any sidebar events such as seminars with visiting musicians and adheres rigidly to a mantra of practice, practice, practice. It’s strictly a performance camp, with an intensive five-day program whose objective is to have the kids choose, learn and perfect a four-song set. They then perform it in front of family members, friends and fellow students on the final night of the session.

The camp, on North Druid Hills Road in the former location of Midtown Music, which was a local legend in its own right, was launched in the spring of 2005. Micki Gonzalez runs the day-to-day business operation, and Jones, a former schoolteacher who has worked as a professional musician and music instructor for years, is the resident pied piper.

Gonzalez recalls how she and Jones, encouraged by the success of other music camps, came up with their own model. “We talked about how we could take a bunch of kids and put them in bands the first day and teach them several songs,” she says. “Let them learn how to be a band. Learn how to argue, learn how to compromise, learn how to share opinions about music in a positive way and learn the stagecraft of a performance.”

Since then, their model has evolved and become more streamlined. “Right away we knew that we wanted to have a Friday night concert, although that has become more of our focus that it was at first,” Jones says. “Bringing in a guitar tech to show them things about their guitars and stuff like that were a big concern, for sure. But it cut a hunk out of the time. And we realized it affected the end product.”

While the budding musicians’ selections of songs to play are often from the classic rock catalog (Jimi Hendrix tends to pop up often), there’s a refreshing eclecticism at work that results in such diverse choices as Howling Wolf’s “Smokestack Lighting,” the Raconteurs’ “You Don’t Understand Me,” Bob Marley’s “Fussing and Fighting,” the Flaming Lips’ “Race for the Prize” and “My God Is the Sun” by Queens of the Stone Age.

“They listen to a different radio station than the staff does,” Jones explains. “We haven’t heard a lot of those songs, and that’s cool because we get some new songs under our belt and we start to like them. When I started teaching, I didn’t know who Weezer was. Or I didn’t know much about Green Day. But I know a lot now, because I’ve had to teach them over and over again.”

The Friday night concerts have inspired many a young musician to start his own band, and quite a few of Joe’s students and alumni can be seen performing around the city in such groups as Frets on Fire, the Solar Bears, Highway and 38th Parallel. Even Chicago Joe’s camp staff is composed of working musicians such as Eskil Wetterqvist, the drummer for Mudcat; bassist-guitarist Mike Cady of the Loneliest Monks; and Jeep Hook, former touring musician for Talk Talk and part of the blue-eyed-soul duo Millions Like Us.

Although Chicago Joe’s Rock ‘n Blues Camp is on hiatus until next summer, many of the campers and alumni continue to practice and play together on Friday nights at the Tin Roof Cantina. The shows are not only a testament to Chicago Joe’s formula for success, but a reward for parents who get to see their offspring take some big strides forward in a public performance situation.

One feels the bonds of a tight-knit musical community at these jams, and they are always a high point for Jones. “Friday nights often bring me to the point of tears,” he says. “I just see it come together and I feel very proud of them, and I can tell they are really enjoying themselves. Friday nights really make me swell up a lot. But also, these kids, year after year after year of getting to know them and being around them, you learn to love them. And they’re like family. We have a family thing going here.”