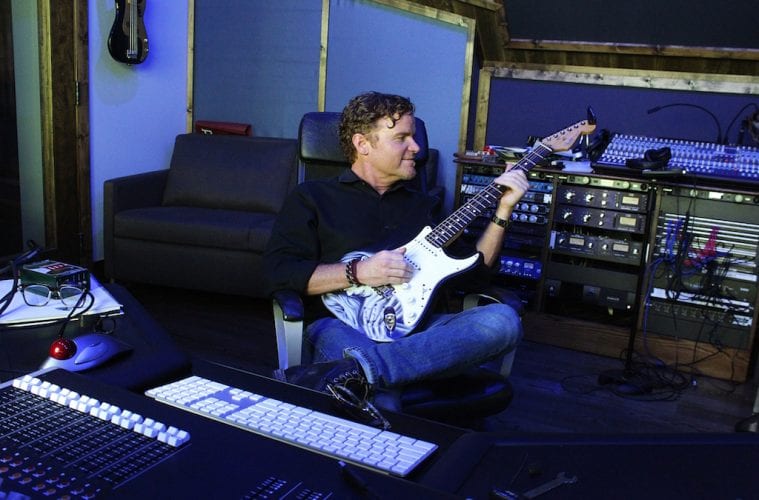 If you’re a rock music fan, you may have first heard of Brian Brasher as guitarist and founding member of the now defunct band Creed — a multi-platinum group considered one of the most commercially successful rock bands of the late 1990s and early 2000s.

These days, however, Brasher prefers to frame his talents in the context of his current success as an entrepreneur, music publisher, composer and president and CEO of music production outfit Pitch Hammer. Pitch Hammer Music is an Atlanta-based company that “provides high-end tracks and custom music services to the movie trailer and theatrical marketing industry.” Their catalog is one of the top music libraries in the industry, and its original sound productions are used and licensed for some of the biggest movie trailers and TV campaigns coming out of Hollywood today.

Since launching in 2012, Pitch Hammer has secured licenses in marketing campaigns for hundreds of major films, including Black Panther, Blade Runner 2049, Star Wars: The Last Jedi, Jurassic World: Fallen Kingdom, Mission Impossible: Fallout and Deadpool 2, as well as for television and streaming productions such as Vikings, Westworld and Game of Thrones.

The process for providing and custom-scoring the music for these film trailers, TV spots and promos varies, but in general, there are about 65 trailer house agencies whose primary focus is to create promotional material for major studios’ films and shows. The editors of these agencies, as well as film studios themselves, can access Pitch Hammer’s music libraries to use for their projects.

“In a lot of cases, they will find at least [one] track that fits the bill and ultimately gets used and licensed for the campaign,” says Brasher. “In some cases, they may need us to customize an existing track by adding or editing sounds or by removing a particular instrument. In other cases, they ask us to start from scratch and create a new piece of music, with a custom score based on the editor and the studio’s specific requests for the campaign.”

Pitch Hammer’s success is no doubt a result of Brasher’s passion for music — a passion born long before he was playing sold-out rock arenas or working as the president of a music production company.

“There was a music gear store down the street from where I grew up, and I used to spend a few hours a day as a teenager in their guitar sales room trying out all of their cool guitars and amplifiers,” he says. “Around the age of 13, my life was forever changed when I was trying out a guitar, and this cool, long-haired older high-school kid named Peter Banfield came in, sat down and started playing an incredible solo called “Eruption” from [Van Halen]. From that moment on, I knew that all I wanted to do with the rest of my life was live and breathe music.”

Brasher played with Creed until 1996, when he realized he had a love for the business side of making music, too. After leaving the band, he moved to Atlanta to work with PolyGram Records Inc., an opportunity that opened the doors to a string of other music business gigs with companies such as 96 Rock, CBS Radio, Clear Channel stations, BMG Music and Hollywood-based APM Music — a music production company and major player in the film and television industry.

While at APM in Los Angeles, Brasher heard the music of Veigar Margeirsson. A top composer and conductor who started out working on commercials for ad agencies, Margeirsson was more of “the big band jazz guy,” says Brasher. He would also later become Brasher’s business partner and cofounder of Pitch Hammer Music. Brasher brings his passion and love for music, which began as a teenager, into the daily business operations he oversees at Pitch Hammer. (Photos by Loli Lucaciu)

“I am a composer too, more on the rock side,” Brasher says. “He is more on the orchestral side. We realized early on that it is really cool to bring those two worlds together. We decided to start a company to cover the musical gamut for all film genres — sci-fi, epic, comedy, action, drama, suspense, whatever the need was.”

“[Brian’s] a great composer and songwriter, and we collaborate on a lot of our compositions,” says Margeirsson. “Since we are both musicians before we are business guys, we have a good understanding of the work processes of all the creative people on our team that we deal with on a daily basis. We have different strengths, and Brian really complements my weaknesses, and vice versa. We truly divide and conquer.”

Brasher admits, though, that “while I help Veigar with music production decisions, most of my guitar playing and singing these days is for fun at parties and at home over coffee.”

In the years they’ve collaborated, Brasher and Margeirsson have worked on many large-scale film and TV production projects.

“One of the most exciting ones was the first trailer for the Spielberg movie Ready Player One, where we recorded [over] 100 musicians in Prague. It was a very challenging project that resulted in a successful final product that garnered much industry attention.”

Recently, the duo was able to collaborate with APM Music on the music library Annihilation, which offers more unconventional, high-end tracks, sound design and underscores for production media. According to APM’s website, “Annihilation brings the unique and unmistakable sound that has built Pitch Hammer’s killer reputation to the worlds of television, radio, video games, the internet and beyond.”

Brasher feels fortunate and excited that he’s able to do work he’s passionate about and grow Pitch Hammer in a place that’s fast become what he calls the “Hollywood of the East Coast.”

Still, when Brasher picks up a guitar at John Hopkins’ Brighter Shade Studios, it’s easy to see that no matter how successful he might be as an entrepreneur and businessman, music is still his first love. He touches the strings with knowledge and affection.

“Even though a lot of Brian’s duties and responsibilities are business-oriented,” says Margeirsson, “he is a musician first.”