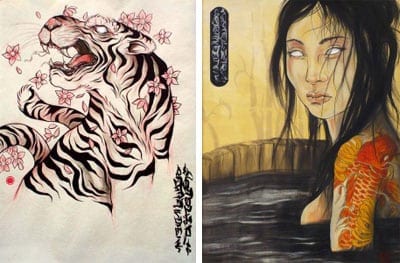 Brandon Sadler has traveled a long way conceptually in the past year, and he is about to travel an even longer way geographically. The SCAD graduate’s departure for a year in Korea confirms his fascination with Asian cultures, which has developed in conjunction with his involvement with graffiti and street art. His newest work, at Wm. Turner Gallery through July 31 in an exhibition titled “Red Dawn,” is hard to divide tidily. The quickly but very skillfully executed drawings, in media ranging from ink and colored pencil to oil and acrylic, owe a great deal to the graffiti traditions out of which he emerged, and even more to traditional and contemporary Japanese art. A good many of them are overlaid on Japanese newspapers. Sadler’s signature, written to be viewed sideways, imitates the calligraphic appearance of Japanese kanji characters.

The tension between street art and Asian tradition (which Sadler is by no means the only artist to have exploited) makes for some excellent visual moments, mingled with an insignificant number of immature ones. At $400 each, there are works here that admirers of emerging talent might well consider owning. Sadler’s website, www.risingredlotus.com, shows him as the graffiti artist of 2009 also known as “Lean.” The show at Wm. Turner gives us a glimpse of the artist he may become in the course of his Korean sojourn. He is clearly en route in more ways than one.