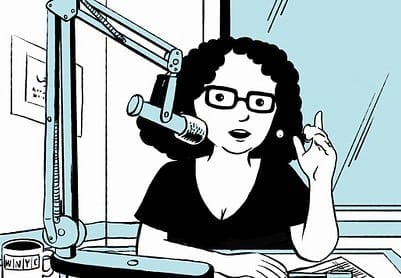 Review: Hate the media? In “The Influencing Machine,” NPR’s Brooke Gladstone blames you

Author appearance: 7:30 p.m. June 13 at Georgia Center for the Book in Decatur.

In her graphic novel-styled “The Influencing Machine,” Brooke Gladstone, host of National Public Radio’s “On the Media,” tackles a brainiac idea in a populist form, offering a kind of “Media Theory for Dummies.” The graphic nonfiction book examines the history of media: their triumphs, but mostly their failures and an ongoing public distrust in their integrity, often deserved. In a time when traditional print media are scrambling to save their possessions as the house burns down, Gladstone offers this compelling but scary caveat: “we get the media we deserve.” The media aren’t a big brother trying to shape our spongy little brains so much as a mirror that reflects our tastes and desires. And apparently America right now wants to see 24/7 updates on Rep. Anthony Weiner’s crotch and Sarah Palin’s mouth and lots and lots and lots of footage of natural disasters.

With illustrations by Josh Neufeld (“A.D.: New Orleans After the Deluge” and “Titans of Finance: True Tales of Money and Business”), “The Influencing Machine” seems birthed from the same graphic-novel universe as Daniel Clowes, Harvey Pekar and the Hernandez brothers, with their skeptical, soulful slackers and alt-take on the world. Such graphic novels have a certain aura of anxiety about them, which turns out to be a perfect fit for the cynical musings of a journalist contemplating what’s good and what’s bad about her chosen profession.

The very form of the alt-graphic novel invites — nay, demands — navel-gazing confession. So in lieu of the usual pointy-headed introduction, we get Gladstone, by page xii, confessing that her job is so obsessive, her need to understand the world through reporting it so consuming, that she actually audio-recorded her mother’s funeral. Cue flatline cartoon mouth on Gladstone’s curly-headed avatar. Clearly this is going to be a very different sort of book about media culture, less eggheady, more “Ghost World.” For the most part, “The Influencing Machine” is told in comic panel style. But sometimes Gladstone just can’t help herself and has to lapse into text-heavy passages with minimal illustrations. It feels a little like cheating. A 25-year media veteran, Gladstone’s scab picking continues in her hypothetical: we know the other guy’s media is stupid, but what if ours is, too? While CNN, especially Lou Dobbs, comes in for some sound trouncing, NPR — defined by its own conventions (cue quirky/plaintive music) — tends to be spared such analysis.

The crux of Gladstone’s peek inside the media machine is a no-brainer worth highlighting: it’s a business like any other. It panders to its audience more than it occupies some corridor of elite privilege. It is as beholden to its public as the Depression-era picture show was in its era.

The best part of Gladstone’s book turns out to be its comic book-style history of the media, which illuminates aspects of history through Gladstone’s media lens. From the ancient Guatemalans whose PR flacks propped up “the Man” with their celebratory drawings to the more headed-in-the-right-direction demand by Julius Caesar that the activities of the Roman Senate be posted publicly, spin and revelation (as in Geraldo Rivera’s famously self-serving description of journalists as “people who turn the lights on the cockroaches as they scurry”) have been the contrapuntal drives of media through the ages. Newborn, emancipated America was an early advocate of a free press. “This is America’s greatest contribution to civilization,” declares Gladstone, her avatar now dressed in Revolutionary garb and toting a musket decorated with the First Amendment. Her media-through-the-ages is a fascinating and scary reminder of two principles: (1) not much has changed, and (2) we have failed to learn from the past. This rollicking and super-cute history of the media includes such whodathunkit details as George Washington’s creation of the media junket, where public relations types wine and dine journalists, so that members of the press would write about his administration in a favorable way. And if we think the current media landscape is a cesspool of sex, sleaze and celebrities and congressmen behaving badly, get a load of American history, baby. Thomas Jefferson and John Adams engaged in an ultra-down-and-dirty PR war during their run for the presidency, in which words like “incest” and “hermaphrodite” were bandied about. And if you think Dubya invented the media blackout on images of dead soldiers, you’d be wrong. The American government also barred images of dead Americans in World War I.

Another cool factoid: before the Civil War, reporters were anonymous.

Gladstone enjoys taking The New York Times down a notch or two for its holier-than-thou attitude, and she tells how the newspaper employed a reporter, William “Atomic Bill” Laurence, who was so hog wild about the A-bomb that he actually rode in the plane that dropped its load on Nagasaki and described it in the loving detail usually reserved for sunsets and 1940s pin-up girls. When news of Japanese suffering and radiation deaths started to leak out, Laurence, both the leading science reporter in America and a government shill, poo-pooed them.

Gladstone fesses up to the many ways the news media, especially TV news, have both given the public what it wants and eroded public trust. There is the fact that news types are often incredibly shallow and faddish, reporting a story to death for a day or two (see Sarah Palin) and then dropping it like a hot potato when the shine has worn off the new toy. And the media are attracted, in perpetual schadenfreude, to bad news. Also high on the catalogue of media annoyances: “weasel speak,” a hilariously apropos term Gladstone uses to describe the “fairness” and “objectivity” that sometimes paralyze the mainstream media in a rictus of “balance” when they should be calling bullshit, as in the John Kerry swift boat non-story.

More troubling, according to Gladstone, is that the news business is in the business of propping up the status quo. She flings open a lot of doors to expose some not-pretty truths about reporters: that, like the Tiffany clerk who begins to relate to her wealthy customers, reporters granted access to the corridors of power too often begin to identify with or even protect their sources and newfound buddies rather than sound the alarm when they do wrong.

Contrary to her self-flagellating leftie typecasting and her description of a media that flock to bad news, Gladstone ends on an upbeat note. Her insight is that, rather than eroding human life and intelligence, the Internet and other new technologies — which tend to be greeted, like every new technology, with suspicion — have the potential to take us to a new place. Maybe it’s just the only conclusion possible for another journalist hoping to keep her job in a beleaguered media age.