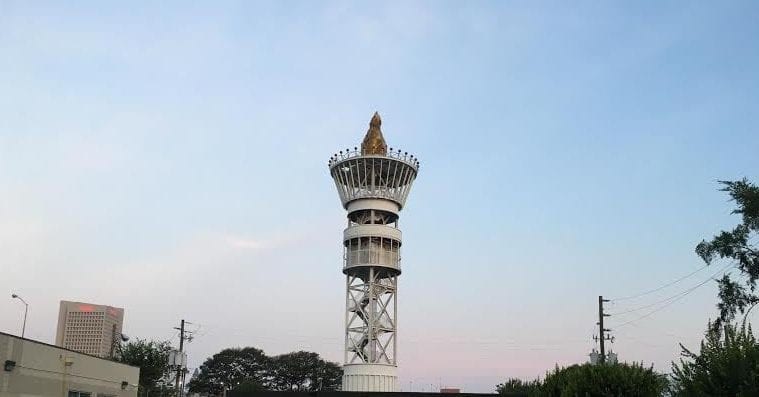 Atlanta Remembers the Cultural Olympiad: the lasting legacy of the ‘rogue’ Olympic torch

Driving on I-20 heading east, crossing over the Downtown Connector you can still see the 1996 Olympic rings and torch cauldron with Turner Field (originally named Centennial Olympic Stadium) in the distance. The area’s most highly trafficked days are Braves game days, but with the team’s impending move to SunTrust Park in Cobb County, those numbers will soon dwindle.

Approximately three miles away stands yet another torch — an Olympic torch, yes — but hardly “official.” (One could even call it ‘rogue.’) And yet, this torch might be the more visible reminder that once upon a time, the world descended upon Atlanta. Standing approximately 120 feet high, this torch tower stands as an adornment along the I-75/85 connector, just a pebble’s toss away from the hundreds of thousands of vehicles that zoom through the city’s major transportation artery on a daily basis.

This other torch is the brainchild of Atlanta developer Taz Anderson (also responsible for the peach atop the 1655 Peachtree building and the peach that was atop the I.B.E.W. building until its recent removal) and was built not just to commemorate, but to profit from the ’96 games. Originally an observation deck, visitors paid to climb the stairs for the view of downtown Atlanta. Quite naturally, the roadside attraction drew the ire of local Olympic officials.

Now closed to the public, the exterior of the torch tower has undergone several makeovers. Currently, it sports basic white paint with the “flame” still permanently ablaze in gold, resembling the school colors of nearby Georgia Tech (of which Anderson is a graduate).

At the time of its construction, Anderson’s privately built torch attracted its fair share of confusion and criticism. As arts critic Catherine Fox noted in The Atlanta Journal-Constitution on August 1, 1996:

Two tries and we still can’t get it right. An Atlanta real-estate developer’s baby, this 123-foot-tall ice-cream cone topped with gaudy, gold and — alas  — an unextinguishable “flame” is billed as an observation tower, but it could end up like Taz Anderson’s infamous giant peaches: another billboard. Either way, The Atlanta Tower is roadside kitsch.

Despite those scathing remarks, it has certainly stood the test of time in the minds of many Atlantans, for better or worse.

Still aesthetically striking and structurally sound, this torch also highlights the difference between a privately maintained structure and some of the public art initially commissioned by the Corporation for Olympic Development in Atlanta (CODA). The collection consists of 100 works on 19 sites by 42 artists, some of which, like the Folk Art Park and the Ralph David Abernathy Memorial, are showing obvious signs of wear and want for refurbishing. After CODA shut down following the games, the financial and on-site responsibility for the maintenance of the art passed along to other entities and currently involves a collection of agencies, including the Atlanta Public Arts Legacy Fund, the Community Foundation for Greater Atlanta, and the City of Atlanta Office of Cultural Affairs.

Atlanta is a real estate developer’s city, so it’s only fitting that Anderson found a way to build his torch his way, even if many newer Atlantans may be unaware of the structure’s history.

“I think we did a great job in trying to capture the Olympics, and the spirit of the Olympics,” says Anderson. “We looked for the best location we could possibly find, and then we tried to figure out how to make it appear to be within the concept of the Olympics. We love the tower and the construction of the flame. We all really enjoyed working on it. The Varsity was a big help, and we had a great time doing that.”

Twenty years later there are a few lingering questions: If the official torch cauldron, the one lit by Muhammad Ali during the opening ceremony, was supposed to be the enduring symbol of the 1996 Olympics in this host city, what does its current less-than-celebrated place in our collective consciousness say about Atlanta’s ability to remember or, more pointedly, the city’s willingness to forget?

Former Atlanta mayor and U.N. ambassador Andrew Young, one of the driving forces behind the 1996 Olympics, even went so far as to lament the official torch cauldron as his biggest regret from those games, likening the structure to “the bridge over the River Kwai” before adding, “And nobody pays any attention to it and it’s an embarrassment.”

With the Georgia Dome (another Olympic venue) and Turner Field set to give way to newer developments, could Anderson’s torch — the torch derided by local critics — end up as the most visible reminder of arguably Atlanta’s greatest achievement, simply through attrition and cultural erosion? That’s the Atlanta way.

“Well, it starts a question,” Anderson says of his torch. “When was that? What was that all about? The current location of the Olympic torch is really not in the main route of travel, so I think they tried to come up with a great idea, but it’s really out of the way. And so the one that people see is ours, and we hope they continue to enjoy it.”

Beloved or not, Anderson’s Olympic torch tower has become a fixture of Atlanta’s low-level skyline, a visual landmark that if nothing else serves as a conversation starter that begs the question, “WhatIzIt?” (Olympic pun intended). And while Anderson hasn’t revealed any future plans for the torch, it is clear that it will come down when he decides so. If and when that happens, one of the most popular pieces of Atlanta’s Olympic legacy will go down with it.