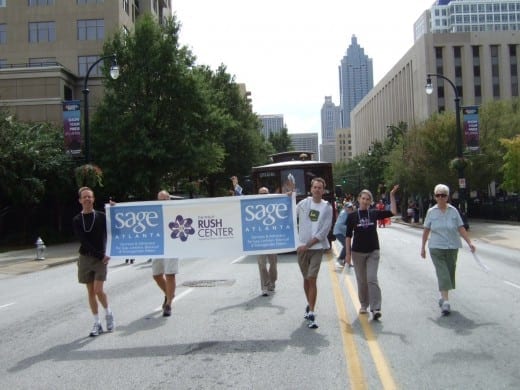 Hillery Rink was looking for volunteering opportunities when he noticed an announcement in The Georgia Voice about a meeting for the new Atlanta branch of SAGE, a national service organization that helps the older gay population with housing and health issues.

For Rink, a former history major, recording oral histories for SAGE (an acronym for Services and Advocacy for Gay, Lesbian, Bisexual and Transgender Elders) was a perfect fit. After getting to know the members, he began to worry that their photos, letters and journals, which documented LGBTQ life in Atlanta, were at risk of disappearing if measures weren’t taken to preserve them.

SAGE volunteer Ann Edmonds shared his concern. While a few had donated their materials to archives focusing on LGBTQ life in Atlanta, many members were not aware that such archives existed.

“We wanted to plant the seeds in the older community that there are archives interested in primary material, so they could write in their wills that they would like their materials donated [to the archives],” Rink says. 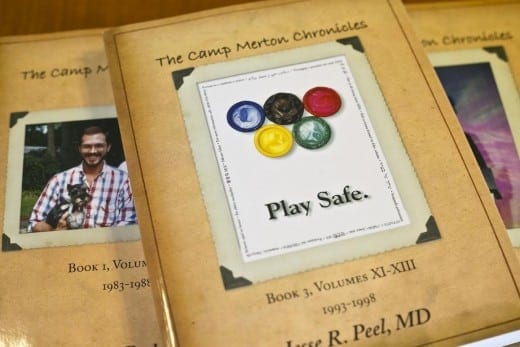 Activist Jesse Peel’s book The Camp Merton Chronicles recounts the AIDS epidemic in Atlanta, the lives of those who died, the friendships and fundraisers. MARBL, Emory University. (Photo by Bryan Meltz)

As manager of the LGBTQ circulating collection at the Ponce de Leon Library in Midtown — the largest designated collection of books in metro Atlanta — Edmonds was in a position to do something about it. After discussions with Rink and Cal Gough (who had built the Ponce collection as its previous coordinator), she started the Georgia LGBTQ Archives Project in December 2011. Its mission: to raise awareness that such archives existed and that they were seeking materials, and to foster camaraderie among the archivists. Its Facebook page brings together information from the many libraries active in this area. Among them:

The Auburn Avenue Research Library on African American Culture, a library in the Atlanta-Fulton Public Library System with a special emphasis on the history, politics, literature and culture of the African diaspora, started its collection in 1998. The African American Lesbian and Gay Print Culture Collection houses the early volumes of Charlene Cothram’s Venus magazine, which focused on gay and lesbian life in the African American community. In 2010, it acquired the journals, notes, poetry and papers of gay and AIDS activist Duncan Teague, artist/activist Tony Daniels and the records of ADODI Muse: A Gay Negro Ensemble. The bulk of the Print Culture Collection derives from newsletters, magazines and newspapers, both local and national.

Emory University’s Manuscript, Archives, and Rare Book Library (MARBL) has been collecting materials for many years, but received its first significant collection in 2005 — records from the public television show The Network Q Records. The archive focuses on LGBTQ history, culture, politics, print culture and public health initiatives in Atlanta and the South. Some of the materials include the research and files of playwright Rebecca Ranson, whose play Warren was one of the first plays produced about AIDS in the world, the papers of activist Jesse Peel, the newsletters from 1980–1999 produced by the National Association of Black and White Men Together, and the records of the Atlanta Gay Men’s Chorus. Olympian figure skater Johnny Weir-Voronov and husband Victor Weir-Voronov, a 2005 graduate of Emory University, have also recently committed to donating their papers to MARBL. “Building a Movement in the Southeast: LGBT Collections in MARBL,” an exhibit from the archives, is on view at Robert W. Woodruff Library through May 16, 2014. 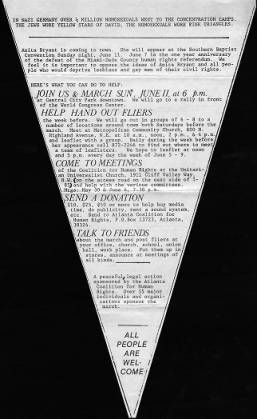 Georgia State University began building a comprehensive LGBTQ studies collection three years ago. It focuses on the LGBTQ experience in the southeastern United States after World War II. Among its holdings are former Ponce librarian Gough’s papers and photographs, which document gay life over the past 40 years, and poet Franklin Abbott’s papers. GSU has recently acquired materials from 7 Stages, including records belonging to Rebecca Ranson and local playwright and novelist Jim Grimsley.

The Kenan Research Center at the Atlanta History Center began collecting LGBTQ materials in the late 1980s, when the collection was called “The Atlanta Lesbian and Gay History Thing.” It is now known as Gay and Lesbian Historical Studies. The archive emphasizes political activism, pertaining particularly to gay rights and the AIDS epidemic, and contains letters, organizational records and publications such as the Atlanta Voice, the Advocate, David Atlanta and Gaydar.

Kennesaw State University’s Department of Museums, Archives, and Rare Books began collecting materials primarily from Cobb County and northwest Georgia during summer 2013. The collection includes past issues of Southern Voice as well as the papers of KSU alum and gay rights advocate David Neubecker, who was a founding member of Gays and Lesbians United for Equality (GLUE), Kennesaw’s first gay rights group, which formed in the early 1990s.

Though the nature and needs of the community have shifted over the past few decades, many believe it’s important to continue to support organizations that provide and preserve writings with a focus on LGBTQ life. At a time of increasing acceptance, it’s easy to forget the struggles and the efforts that paved the way, says Randy Gue, Curator of the Modern Political and Historical Collections at MARBL. Which is why Gue, Rink, Edmonds and others feel it’s crucial to collect papers and records before they disappear.

“The stuff [the LGBTQ community] has in their attics, closets, and under their beds,” says Rink, who now serves as president of the Archives Project, “are all valuable historical documents. Everyone has a piece of history to share.”

Click here to view more photos and materials from the archives.