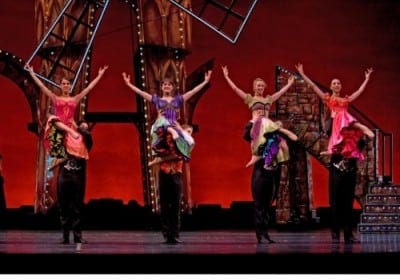 It’s no secret that story ballets are staples of most ballet companies’ repertories — they appeal to the broadest audiences. New ones are rare, partly because of the time and effort required to produce them. But with Jorden Morris’ “Moulin Rouge® — The Ballet,” the Royal Winnipeg Ballet’s investment appears to have paid off. (Note the registered trademark symbol, ®.) 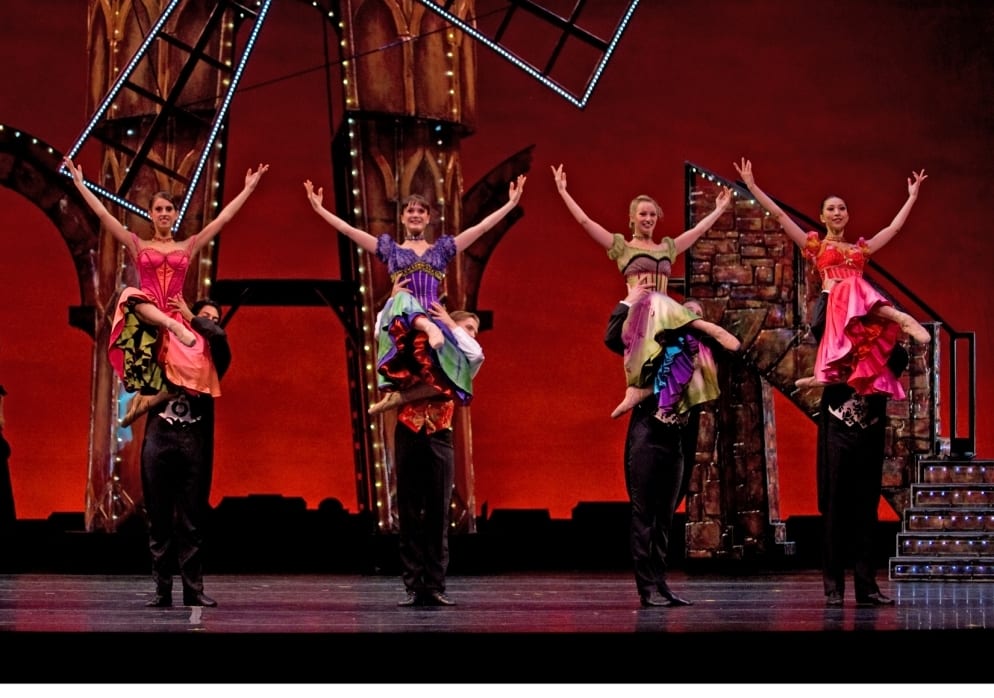 Still touring Canada after a year, the ballet has grossed more than any previous RWB production. This weekend and next, Atlanta benefits, when the work opens Atlanta Ballet’s 81st season in its Southeastern U.S. premiere at the Cobb Energy Performing Arts Centre. (All photos from the Royal Winnipeg Ballet production.)

Initially, choreographer Morris was fascinated by fin-de-siecle Paris. When the Moulin Rouge cabaret opened in 1889, the atmosphere of Paris was “like a pot boiling over,” Morris told me. That same year, the Paris Universal Exposition featured a spectacular display of electric light, a new-fangled invention called the telephone, and a gigantic iron structure on the fairgrounds, the Eiffel Tower. Motion picture technology was developing. Social classes mingled freely, and an influx of immigrants brought many cultural influences into the mix. Work by artists such as Toulouse-Lautrec, Degas, Manet, Monet and composers Ravel and Debussy reflected the era’s tremendous artistic breadth. 1889 was the year Paris became “modern.” 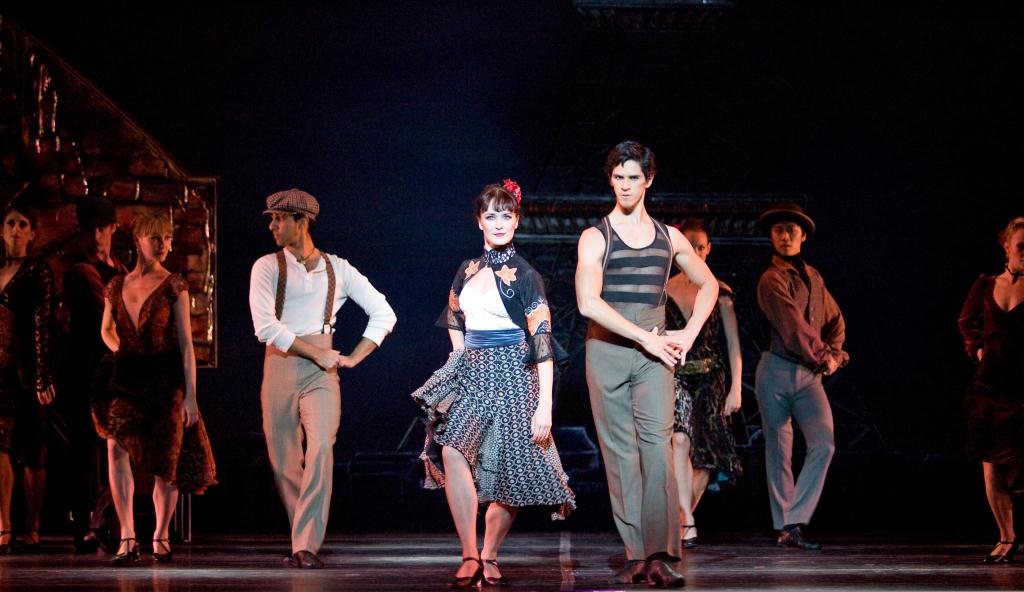 While developing his story, Morris learned that young women often came to Paris, perhaps with dreams of glamorous lives, and found work as launderettes. Club proprietors such as the character Zidler would recruit dancers from among these women and from smaller clubs. Hence the character Nathalie, a street-savvy “big sis” among launderettes, with leading-lady aspirations. Zidler launches Nathalie into stardom (but he falls for her); Natalie falls in love with naïve young artist Matthew, setting up the tragic love triangle.

Morris knew he had a great story to tell through dance. But there was one major obstacle: securing legal rights to use the Moulin Rouge’s trademarked name. It was daunting, Morris recalled in a lecture at Atlanta’s Alliance Française — the Paris cabaret rejects about 20 such requests daily, from dance and theater companies and film producers. 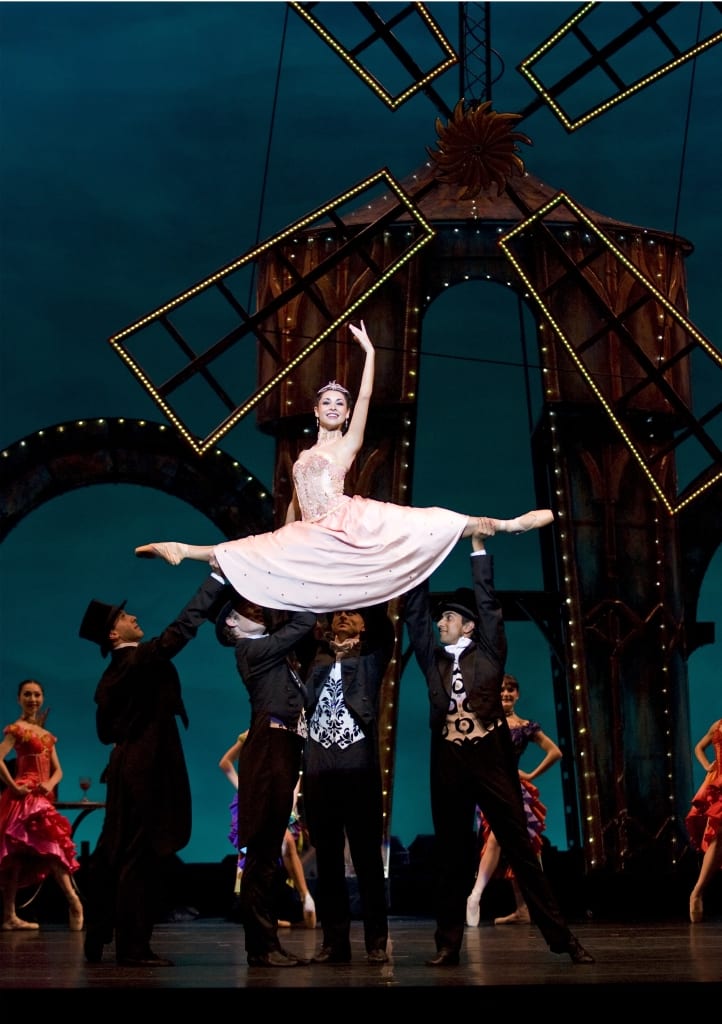 But it helped the RWB’s case that two members of the Moulin Rouge company had trained at the RWB, and perhaps Moulin Rouge executives saw a chance to align their image with an  internationally respected ballet institution (rather than Las Vegas-style floor shows) and elevate their reputation. Whatever the reason, they agreed to consider Morris’ proposal: a script, story boards, costume designs and selected music. In the licensing agreement, Morris’ artistic intention had to be clear. The scope of the license had to be spelled out, and — very important to the Moulin Rouge — the work had to be historically accurate.

Historical accuracy and authenticity often aren’t sexy. But details matter in story ballet, and the lengths to which Morris and his design team went to achieve them feeds my hunch that “Moulin Rouge® — The Ballet” could be one of those rare times when all the elements come together.

Set designer André Beck traveled to Paris to sketch buildings and bridges for his designs. Morris explained how lighting designer Pierre Lavoie captured the look of Parisian light, and how tiny lights illuminate the scenery. Costume designers Anne Armit and Shannon Lovelace developed some 150 costumes, from custom-made boned corsets to full-skirted tango dresses made with Argentine fabric. Each can-can dancer’s petticoats have a vivid palette of colors, and when they line up on stage and raise their skirts, each girls’ colors match those of the one beside her.

About the choreography, I wrote in the AJC:

“Morris and his dancers blended French cabaret dancing with classical ballet to form ‘a new dance dialect.’ This hybrid style elevates the can-can from heeled shoes to pointe shoes and lengthens the line of the leg. The tip of the shoe’s smaller pivot point allows for sharper, faster kicks and turns, adding spunk and vigor to ballet’s elegant, clean lines.

“Recently at Atlanta Ballet’s new headquarters, company artists rehearsed this style with Morris — their dancing wholesome, exuberant, with a dash of coquetry. Like fireworks, four couples burst into a succession of overhead lifts, dropped into fish dives and plunged into the splits. Cymbals clashed as dancers hit high kicks at a rapid clip and whirled through dizzying turns, swishing their skirts and shrieking with delight.

“Later in rehearsal, Christine Winkler, as Nathalie, and John Welker, as Matthew, danced a romantic pas de deux to soft, melodious music. Seeming to float in his arms, she unfurled like a flower and sailed around him as he turned. Time slowed for the entranced couple, as if the outside world ceased to exist.

“After rehearsal, when asked what he’d like for audiences to come away with, Morris replied, ‘I’d like them to feel they’ve either had a snapshot or a glimpse or an emotion or some sense of Paris. I’ve tried to make it a very human story that everyone can relate to. I’m sure everyone has had that love triangle at some point, or has been misled by their boss, or given a job for not all the right reasons they’ve been told. I try to make it accessible so that people can say, that happened to me once…. I think the audience will connect with some part of that human content.’ ”