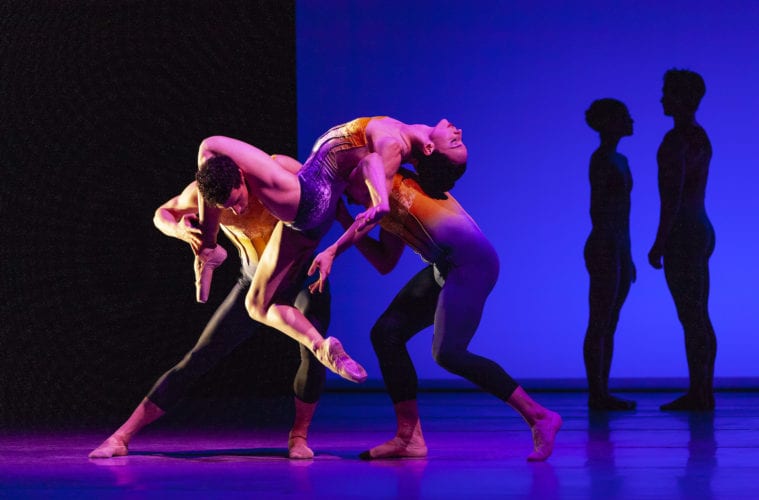 How refreshing for artists, who are so often charged with the mind-bending task of telling a story without words, to simply let go and revel in the joy of movement and musicality. But abstraction isn’t easy; it requires a deep commitment to the rigor of movement creation, and the three choreographers embarked on this task with varying levels of success.

In his Sum Stravinsky, Ross gently nodded to jazz with a drag turn here and a hip tilt there but overall limited his movement choices to academic neoclassicism. A sky-blue backdrop washed out the dancers, who wore costumes of the same color — the women in fancy tops with tutus, sparkling earrings and bold lipstick, and the men strangely informal in slouchy, translucent T-shirts and monochrome pants.

To be sure, the Atlanta Ballet dancers, the majority of whom joined the company recently, displayed growing confidence and technical maturity throughout the evening. Jessica Assef’s solo in Sum Stravinsky was a masterful display of restraint and virtuosic control; she can turn faster and toss her legs higher, but she held back. The nuance and rhythmic intricacy of Stravinsky’s “Dumbarton Oaks” concerto, played by the Atlanta Ballet Orchestra with Tara Simoncic conducting, informed Assef’s choice not to give it all away and highlighted Ross’ attention to detail. Sum Stravinsky read like a palette cleanser: crisp and refreshing, not to be taken too seriously. It was abstract without a reason why.

Gemma Bond’s Denouement upped the ante. The ballet debuted as part of Atlanta Ballet’s 2016–17 season and was Bond’s first commission by a professional company — showcasing Bond’s emerging talent as a contemporary ballet choreographer.

In contrast to Ross’ calculated restraint, Bond’s movement invention pushed physical limits. In a breathtaking feat, Nadia Mara ran full force toward the three male dancers, who tossed her above their heads in a horizontal double rotation. Seconds later, Jordan Leeper threw her into the same lift, this time by himself.

The work — an autobiographical musing on big life decisions — didn’t direct the viewer toward a specific emotional response but left enough room for it and amplified the collective power of an experienced cast. Newcomer Mikaela Lauryn Santos stepped up to the challenge and delivered a sophisticated performance alongside the veteran dancers. Fuki Takahashi and Dylan Clinard show that trust and risk are integral to Catch. (Costumes by Liam Scarlett)

Denouement and Scarlett’s Catch shirked some of ballet’s more rigid traditions. They employed moments of same-sex partnering, and neither saw women in tutus. Movement qualities flirted with a sense of freedom and included spinal undulations, flung limbs and gestural phrases. Perhaps hungry for the unfamiliar, the audience ate it up, and with each piece, the energy and applause grew.

Catch was clearly the crowd favorite. But it revealed an urgent need for stronger contemporary training at Atlanta Ballet. Over and over, the dancers threw an invisible ball from one hand to another, a gesture that often appears in contemporary modern works. But the movement lacked weight and substance, necessary components of believability. Led by veterans Jackie Nash and Jacob Bush, dancers’ limbs blurred in a frenzy of complex partnering sequences, all well executed and precise. But simple gestures, like dribbling a ball, often fell flat, presumably because dancers’ classical ballet training emphasizes a lifted center of gravity in the body. The dancer works to resist the pull of gravity rather than using that pull to create the senses of rebound and momentum that are integral to Catch’s vocabulary. And though the orchestra performed Philip Glass’ iconic Violin Concerto No. 1 with gusto, many dancers did not fully embody the music’s deep, driving tones.

Dance can be abstract, but bodies never are. In an open rehearsal for Catch one week before the performance, a viewer asked Scarlett what he looks for in a dancer when casting his ballets. A group of young company dancers, many of whom had not been chosen to perform the work, perked up, and the room fell silent in anticipation. He answered that he is not interested in technical prowess but a dancer’s “individuality” and their ability to maintain a strong identity. “Honor how you got here,” he said, “and don’t be carbon copies of one another. You are human beings first and foremost.”

Can pure ballet express or even include the human experience? By commissioning Scarlett to create a new work for Director’s Choice, Artistic Director Gennadi Nedvigin gave the choreographer a powerful platform. Scarlett answered the call by offering a work that refuted classicism without fully embracing the rigor of contemporary techniques. Individuality — that indefinable spark that makes great dancers and great companies — can and should be cultivated through a diverse repertoire.