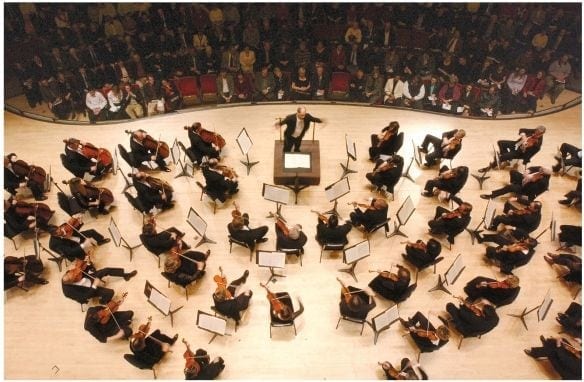 The Atlanta Symphony Orchestra plans to perform in front of audiences again at Symphony Hall when the 2021-22 kicks off in September. (Photo by Jeff Roffman)

The Atlanta Symphony Orchestra plans to host audiences at Symphony Hall for the 2021–22 season and will also continue to provide virtual broadcasts of subscription concerts.

The season was announced as the ASO searches for a permanent music director to replace Robert Spano, who will retire at the end of this season after 20 years with the orchestra. He will become music director laureate and planned the upcoming season with Donald Runnicles, the ASO’s principal guest conductor.

Audiences are expected inside Symphony Hall for the first time since the pandemic shut down concert halls worldwide in mid-March 2020. How that will work is still unknown. The ASO will follow public-health guidelines in determining how many people can attend and what social-distancing restrictions will be required. Expect details this summer as leaders get a better idea of what the pandemic will look like in the fall. Symphony Hall has been outfitted with significant improvements to its airflow system.

Season subscribers will receive priority seating and the ASO plans to continue its virtual showings of performances throughout the season. Information about holiday and family concert series will be provided later in the year.

After months of virtual concerts performed in an empty Symphony Hall, Spano said he is excited to be in front of audiences again. “We miss our patrons greatly, and I look forward to greeting audiences at Symphony Hall on opening night with Garrick Ohlsson — an incomparable musician and a great friend of the ASO,” Spano said in a press release. “What could be more iconic than Beethoven’s ‘Emperor’ Concerto and the Fifth Symphony, both embodying a journey from darkness to light? I can’t think of a program better suited to the return for all of us to Symphony Hall.”

Spano and Runnicles have chosen concerts that expand the orchestra’s commitment to diversity, with 23 works by women and composers of color. There will be five world premieres, including four ASO commissions intended to commemorate the commitment to new music by Spano and the ASO. The orchestra will debut Michael Gandolfi’s Piano Concerto, Mark Buller’s The Parallactic Transits and Krists Auznieks’ Sub Rosa.

Also debuting is a new concerto for double bass written and performed by Xavier Foley, an alumnus of the ASO’s Talent Development Program.

Featured composers will include the masters — Beethoven, Brahms, Tchaikovsky and Mahler — mixed in with modern works from Osvaldo Golijov, Jennifer Higdon and Conrad Tao (a world premiere violin concerto).

The ASO will have special one-night performances with Itzhak Perlman (May 21), Yo-Yo Ma (April 13) and cellist Sheku Kanneh-Mason with his sister, pianist Isata Kanneh-Mason (May 8).

The Atlanta Symphony Orchestra Chorus will return to the stage in 2022 for the first time in two years. On March 17–18, Nathalie Stutzmann, the new principal guest conductor of the Philadelphia Orchestra, will lead the chorus in Mozart’s Requiem. The chorus will return April 28 and 30 for Duruflé’s Requiem, with Runnicles conducting.

Runnicles will be at the podium December 5 and 8 for Engelbert Humperdinck’s opera Hansel and Gretel, based on the Brothers Grimm fairy tale. The show will feature mezzo-soprano Kelley O’Connor as Hansel and soprano Jacquelyn Stucker as Gretel.

Runnicles has renewed his ASO contract through the 2022–23 season. “The Atlanta Symphony Orchestra and Atlanta Symphony Orchestra Chorus are two of the greatest musical institutions in the world,” he said in the press release. “It is hard for me to express adequately the bond that, over these many years of music making, has only deepened — a bond that fills me with pride, humility and gratitude. I am thrilled and inspired to intensify my relationship with the orchestra and our wonderful community.”

After the pandemic shuttered live performances last year, the ASO pivoted to its Behind the Curtains virtual concert series. The concerts were viewed in 46 states and 21 countries.

“We are thrilled to once again take the stage in Symphony Hall and look forward to welcoming back live audiences in September,” Jennifer Barlament, the ASO’s executive director, said in the press release. “We are grateful for the support and collaboration of Robert Spano and Sir Donald Runnicles during this unprecedented year, and we look forward to enjoying the brilliance of this creative team.”

Despite the difficulties poised by the pandemic, the ASO is on course for a seventh consecutive year with a balanced budget. That is a remarkable achievement considering the ASO was in such dire financial condition in 2014 after a decade of annual deficits that it locked out its musicians in a bitter labor dispute that postponed the season for two months.