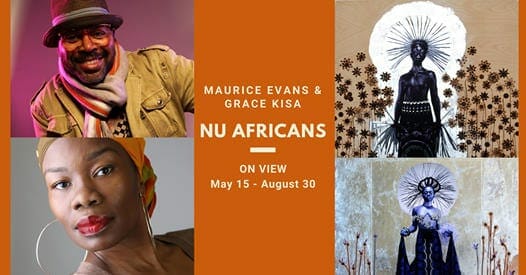 Nu Africans, a collaborative body of work by Maurice Evans and Grace Kisa, opens virtually at 7 p.m. Friday at Hammonds House Museum. The exhibit, inspired by African warriors and queens, features models dressed in elaborate costumes, headpieces and crowns, then photographed as both a warrior and a queen. The opening (free for museum members, $7 for nonmembers) includes the exhibit, a chance to speak with the artists and an after-party featuring music by DJ Salah Ananse. Tickets HERE. The show will be up through August 30.

Dad’s Garage Theatre Company streams its production of 44 Plays for 44 Presidents at 8 p.m. Friday via its Twitch.tv channel. The comedy, from Chicago’s Neo-Futurists, packs 44 short plays (two minutes for each U.S. president from George Washington through Barack Obama) into a two-hour show. You’ll laugh the whole time, Dad’s promises, and then realize you actually learned stuff.

In times like these when we are separated by necessity, ArtsATL is needed more than ever. Please consider a donation so we can continue to highlight Atlanta’s creative community in this unprecedented time.