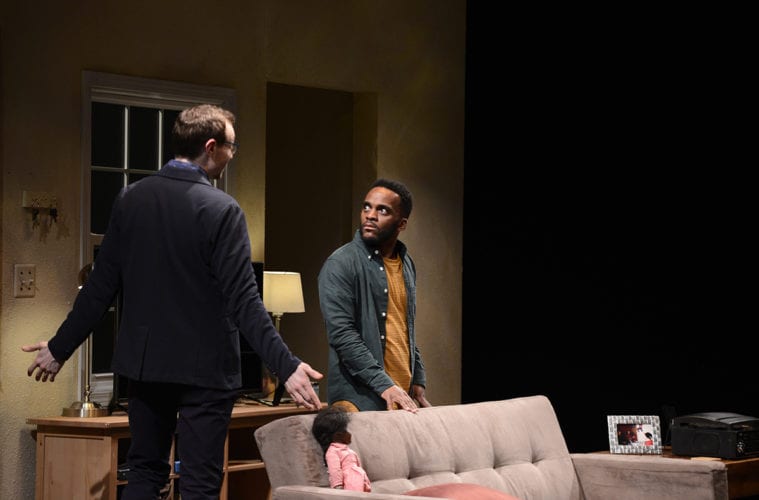 Alex Gibson and Travis Turner star in the 2018 Kendeda play Goodnight, Tyler at the Alliance. (Photo by Greg Mooney)

Alliance Theatre’s Goodnight, Tyler stumbles on its own ambition

If there were a yearbook superlative for least likely to be shot by the police, Tyler Evans (Travis Turner) would have won it. He has a college degree, his favorite food is frosted Pop-Tarts and he listens to Ella Fitzgerald when he needs a pick-me-up. His gay roommate Davis is white (Alex Gibson), and so are his fiancee Chelsea (Alexandra Ficken) and his best friend/fraternity brother Drew (Chris Harding). Yet, he’s dead, and his friends — along with his grandmother (Andrea Frye) and a Black Lives Matter activist Shana (Danielle Deadwyler) — are left to figure out why this happened to him. And all he can do is look on from the afterlife wishing he were more than a hashtag and a headline.

This is the premise of B.J. Tindal’s play Goodnight, Tyler, receiving its world premiere on the Alliance Theatre’s Hertz Stage through March 10. Tindal is the winner of the theater’s Kendeda Graduate Playwriting Competition, and he started writing the play as an undergraduate at Oberlin College. This young writer is to be commended for drafting a different take on police brutality by telling the story through the eyes of the victim who is not ready to leave his life behind. Tindal infuses a lot of humor into the play, and it makes sitting through a show about police brutality palatable — too palatable. Humor is indeed the device African Americans have been using to get through hard times for centuries in this country, but like Enron the musical, this feels a bit too soon. 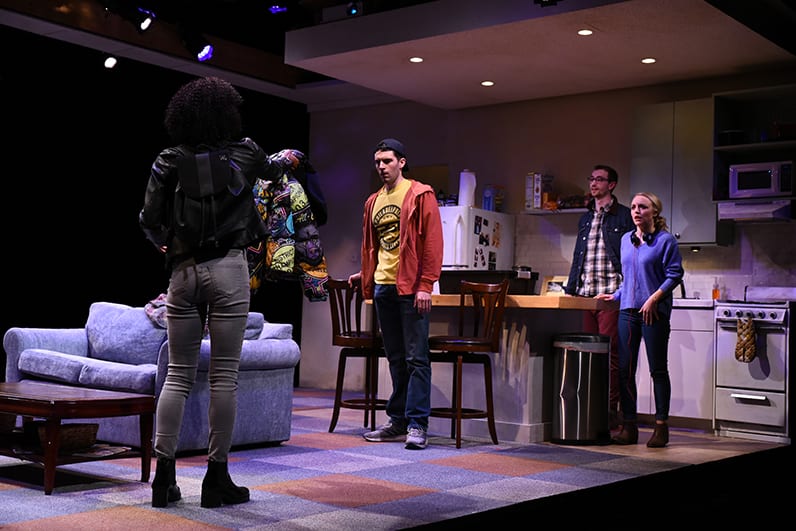 It also doesn’t help that Tyler is not really likable, which is the point and the problem. In Turner’s interpretation of him, he’s immature, unsure and whiny, which at 26 years old is not as tolerable as it is at 23. To clarify, this is never a reason to shoot someone, but since the story is told through the perspective of the mundane life he never lived, it’s hard to grasp onto him, which is again the point and the problem.

The people in his life are far more interesting than he is, and this comes off in the actors’ performances as well. I’m predicting a Best Supporting Actor Suzi Award nomination for Gibson, who adds much-needed depth and adroit physicality to the gay best friend archetype. Ficken, who was last on the Alliance stage in Hand To God, shows herself to be a formidable dramatic actress in this departure from her usual sillier roles. Deadwyler completely delivers, gifted character actress that she is, especially in an argument between Shana and Chelsea. And Frye’s masterful use of comedic timing and palpable anger make her a standout.

The other problem with Tindal’s script is that he shows all of his cards and packs a lot into this 2-hour-and-30-minute play, which truly needs 20 minutes shaved off of it. The first half is farcical in nature, all setups and punchlines, as Tyler interacts with the members of his tribe as if he never died; he’s trying to go on as if he’s still alive because they’re all in the denial stage of grief. Tindal also tries to unearth social issues that face black kids who grow up in mostly white environments, such as assimilation, code switching, learning to appear nonthreatening, interracial dating and how going to school in such an environment creates a chasm between them and their black families.

The tone of the second act is much more serious as everyone transitions into anger and depression and Tyler’s bargaining. It’s during this act that conversations about sexual orientation, what it means to create a family with an ambitious career woman and respectability politics arise. Tindal brings up a lot of things but doesn’t dig into and land on any one thing.

These loose ends hang on throughout all elements of the production. The audience is seated on either side of the set of Tyler and Davis’s apartment, designed by Jason Sherwood, which is suspended in the middle of the room with everything being see-through. The insulation and ducts in the walls are exposed, the shelves are open, the coffee table has a shelf underneath, you can see under the couch, under the island. Director Kent Gash deftly stages this unusual setup and develops the characters’ relationships well. Even with a talented cast, director and creative team, the writing in Goodnight, Tyler has a bit further to go before it is at the level of the 2018 Kendeda winner Sheltered or the 2017 winner Too Heavy for Your Pocket.

That said, more shows that depict blackness outside of monolithic expectations are desperately needed on stages in Atlanta and around the country. Goodnight, Tyler is certainly the type of show that colleges should keep their eye on with its cast of four 20-somethings and one elder. And hopefully one day the souls of all of the Tylers of the world will be able to rest and this play will be historical documentation instead of an ever-present reality.