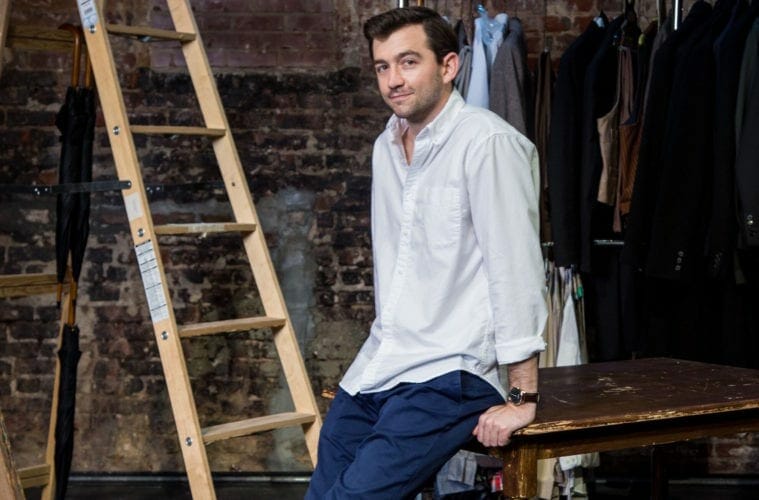 Atlanta actor Shaun MacLean did six shows in 2019, ranging from "The Last Night of Ballyhoo" at Stage Door Players to "Our Town," "The Laramie Project" and the ongoing "The Wickhams" at Theatrical Outfit. (Photo by Casey Gardner)

20 by 2020: Actor Shaun MacLean finishes a big year and keeps the faith for more work

This year’s 20 by 2020 series attempted to profile 20 theater artists, administrators and innovators by year’s end. All are shaking up the city’s stages. This is No. 17 (and the last in the series, but not the last story of its kind). To see the others, search “20 by 2020” from the homepage.

Shaun MacLean has had an excellent 2019.

Performing in six shows all around Atlanta and being featured in national TV commercials this year, the 27-year-old actor says the experience he gained has been invaluable.

MacLean, onstage in Theatrical Outfit’s The Wickhams: Christmas at Pemberley through December 29, began the year in Stage Door Players’ The Last Night of Ballyhoo and then did Out of Box Theatre’s summer run of A Public Education. He returned to Stage Door for Laughter on the 23rd Floor. He spent August and September as part of Theatrical Outfit’s titanic repertory of Our Town and The Laramie Project. Shaun McLean (right, as George Gibbs in “Our Town”), gets advice from his father-in-law-to-be (Jayson Warner Smith) on the morning of his wedding. (Photo by Casey Gardner)

MacLean has never done so much theater before, and he credits two commercials he filmed last year with NBA great Shaquille O’Neal and The General insurance for making it all possible.

“That really was a life-changing booking for me,” he says. “To have that money coming in, I was able to quit my day job over the summer, then really fully clear my plate and commit to all the theater coming my way.”

MacLean says that every show he did this year prepared him — sometimes in unexpected ways — for the next role. Laughter and Ballyhoo gave him stronger comic chops, which he uses in Wickhams. Ballyhoo helped him work with dialects, which proved useful while working on Laramie and Our Town. The dense, everyday jargon he used while playing a teacher in Education taught him how to approach the voices of the real people interviewed for Laramie.

And all the talent he has worked beside inspires him.

“Working with some of these actors and directors this year has taught me so much about being onstage, being a performer and a professional in this industry,” MacLean says.

The Our Town/Laramie repertory, with each drama using the same 10 actors, was demanding, to say the least. He had to learn two scripts from different eras with different tones while working with two directors, often in the same eight-hour day. He played George Gibbs, the boy and young husband in Our Town, and a multitude of characters in Laramie. He calls it the “pinnacle experience” of his professional life. From Thornton Wilder to The General. Shaun MacLean in a TV ad with NBA great Shaquille O’Neal.

“It was a big old obstacle course, it really was, which made it that much more rewarding,” MacLean says. “Once we got the plays up, it was like heaven, man. We’d done all the work, we had the shows and every day was a challenge to go out and do the best we could.”

Before auditioning for George, MacLean hadn’t even read Our Town.

“It was a gift and a curse because I didn’t have a preconceived bias about the project as a whole or a preconceived notion about George,” he says. “But every day was like peeling back a layer, because that thing is an onion. Thornton Wilder wove so much intricacy into that script, and it goes to such a deep level. That show is timeless. It’s about the core of human existence.”

MacLean grew up in Norcross and began acting in the fifth grade alongside fellow Wickhams actor Erika Miranda. That, too, informed his approach to characters from Grovers Corners, the ideal American town presented a century ago, and Laramie, Wyoming, where hate festered in 1998.

“Norcross isn’t a small town, but I feel like I had a small-town experience,” he says. “We’re all still in touch, and everybody knows everybody.”

He majored in business at the University of Georgia before deciding he had to act. He’s worked, among other places, at the Atlanta History Center, performing monologues for schoolchildren as Governor Lester Maddox (1915–2003).

“Playing a racist guy and yelling at kids is not fun, but it’s good at helping you figure out how to develop a character,” he says. “No one ever sees themselves as a villain.” Shaun MacLean (center, with Curtis Lipsey and Stacy Melich) played five characters in Theatrical Outfit’s “The Laramie Project,” including Matt Galloway, the bartender at the Fireside Bar the night that Matthew Shepard was murdered. (Photo by Casey Gardner)

MacLean has booked some TV work to air in 2020 but cannot discuss it, and he believes more theater roles will come.

“I’m trying to have faith in the fact that I have nothing booked,” he says. “That’s cool. I’m cool with that because some of the greatest things have come out of me being open and available to the universe to see what comes at me.”

It’s the nature of the job, he says, to enjoy moments as they come and to trust that more opportunities will present themselves.