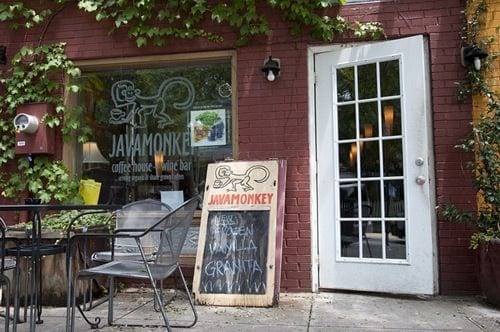 11 years and counting: Once a week, poetry reigns supreme at Java Monkey coffeehouse 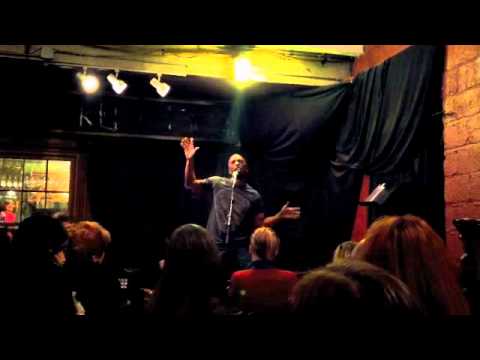 Every Sunday evening year-round, rain or shine, poets and poetry enthusiasts gather on the porch of Java Monkey, a coffee shop and wine bar in downtown Decatur, for a beloved tradition: a poetry reading series called Java Monkey Speaks.

The series, founded by local poet and musician Kodac Harrison, recently commemorated its 11th anniversary, making it one of the longest-running reading series in the Atlanta area. Harrison kicked off the celebration with a poem of his own (see below), introduced each reader, led the crowd in a rousing rendition of “Happy Birthday” and sliced a large birthday cake into pieces with a sword.

By Harrison’s calculation, Java Monkey Speaks has held readings on 568 Sundays, missing just four in 11 years: one on a Christmas Eve, one on a Christmas Day, one on the Fourth of July and one because of a power outage. The readings begin at 8 p.m.; aspiring readers are encouraged to arrive early to sign up for a spot in one of the two open-mike portions of the evening. Participants, who are allowed to read one piece per night, vary in experience from first-timers to veterans.

Between the open-mike sessions, a “featured” poet anchors the event with a longer reading of his or her work. Featured poets over the years have been born in 15 countries and ranged in age from 17 to 91, with an intentional diversity of gender, race and sexual orientation. The featured poets, from “slam” champions to Pulitzer Prize winners, also display a wide array of poetic styles. Local Pulitzer winner Natasha Trethewey, a creative writing professor at Emory University who has just been appointed poet laureate of the United States, has appeared three times as the featured poet at Java Monkey Speaks.

A venerable fixture on the Atlanta music and poetry scenes, Harrison likes to say that the series is “the place where all other poetry readings overlap.” He thinks of the event as a “grass-roots reading” and is committed to an inclusive, supportive atmosphere, casual and loose yet respectful.

As master of ceremonies, Harrison brings a zany sense of humor and a deep passion for poetry, music and performance. Open-mike poets sign up to read using their own names, their slam monikers or epithets such as “Joe’s mom.” Harrison peruses the sign-up sheet and calls readers to the stage not in chronological order but according to the whim of the moment.

When first-timers approach the microphone, he encourages the audience to welcome them with “a double dose of applause.” Poets familiar to the Java audience also get a warm reception. Anyone chatting too loudly on the porch risks a polite scolding from Harrison and a request to listen to the poetry or move inside.

Like the work of the featured poets, the open-mike readings run the gamut, from rhymed verse to rap-like spoken word. Some read from well-creased notebooks; others recite from memory. There is “heavy stuff,” such as Harrison’s poem about his father, who died of cancer when Harrison was nine, and lighter fare, political poetry, social satire, love poetry and elegies.

Eight Sundays a year, from September through April, Java Monkey Speaks also hosts the Second Sunday Slam. Unlike a traditional poetry reading, a slam limits performances to three minutes or less, which are judged by the audience. Slam competitors form the Java Monkey Slam Team, whose members performed as the featured poets at the anniversary celebration.

In addition to the reading series and slams, Java Monkey Speaks has spawned four anthologies, published by Poetry Atlanta Press and co-edited by Harrison and local poet and novelist Collin Kelley. Each anthology showcases the work of a diverse roster of poets featured at the reading series.

Dear father who art in Heaven,
I’ve been angry with you for years.
I was only 9 years old when you left,
but only four when you were diagnosed
and given only two years to live.
Cancer was eating at your insides
keeping you in and out of the hospital
those last few years.…

Something has been eating at my insides also.
Mother said you tried to disassociate yourself from me,
to keep me from getting too attached.
You thought it best for me.
I guess I understand.
Mother said that last time in the hospital
the last thing you told her was,
“I won’t be coming home with you this time.”
You knew your time was running out.
Consciously maybe I understood,
but subconsciously I was mad.
I realize that I need to forgive you
in order to forgive myself.

All my friends had fathers and I wanted one too.

I tried to wipe you out of my memory.
It was just too painful.
I do remember once when you got angry with me,
for what I thought was no good reason.
I didn’t understand that the stroke you suffered
in that last year of your life
muddied your thought processes.

The only thing I remember of your funeral was the pallbearers
bringing your casket down those steep church steps.
A rose petal fell from the casket as a tear fell from my eye.
I reached down to pick up the detached petal.
Disconnected from its flower,
the petal seemed so soft, so fragile, so incomplete.

All my friends had fathers and I wanted one too.

I don’t know if I really believe in Heaven,
but I do know you are alive down inside of me
helping to shape the person that I am.
Now I want to know who you were,
so I can better understand — who I am.
Sometimes I feel so fragile, so soft, so incomplete, so disconnected, so detached.
Please — pick me up.
Daddy — pick me up.