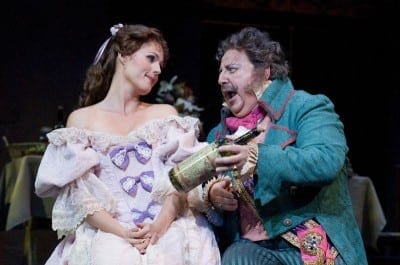 Atlanta Opera opened its 30th season with Gaetano Donizetti’s “L’elisir d’amore,” an 1832 screwball comedy about a feckless young man who dunders his way through courtship but still ends up winning the smartest and prettiest girl in the village. Along the way he’s duped by a traveling charlatan, a smarmy army sergeant and a chorus of village girls who fling themselves at him after he inherits a fortune. It’s an opera that give hope to underachieving men of all nationalities.

In a review printed in Monday’s newspaper (but that hasn’t appeared on ajc.com), I noted that, “since moving into the Cobb Energy Performing Arts Centre in 2007, Atlanta Opera has been on a rapid rise in the beauty of the singing, the effectiveness of the productions, the sound of the orchestra — in sum, the heft, communication and quality of its art. Last season’s ‘Flying Dutchman’ and ‘Akhnaten’ were proud accomplishments, two of the strongest offerings in its history.

“But a half-dozen steps forward, one step back: Saturday’s season-opening performance of ‘The Elixir of Love’ included free champagne in the lobby and often looked fabulous. Musically, it plodded along. The show runs through Oct. 11.

“In David Gately’s stage direction, the story’s charming conceit — played out silently by children during the overture — is that Nemorino and Adina, our happily-ever-after couple, have had feelings for each other since school days. This invented backstory doesn’t make the absurd hijinks any less improbable, but it gave a human touch to a show that was too often lacking in emotion and warmth. Donizetti’s genius for melody means almost every number is a hummable tune. Felice Romani’s libretto is daffy and heartfelt, the orchestrations are careful and spare, and beautiful bel canto singing, by design, outweighs all other factors.

“But this ‘Elixir’ had fundamental problems, and they mostly sprang from the pit. Former Atlanta Symphony music director Yoel Levi has become a regular at the Atlanta Opera and will return for “Aïda” in February. A few brief solos aside, the orchestra here often sounded choked and listless, where a simple oom-pah-pah accompaniment drowned out the singers.

“Levi’s beats sounded metronomic and his tempos arbitrary — typically too slow for the singers to navigate music that’s supposed to breathe and swoon with life. Missing was any fluidity in the music, any shapely lyricism.

“Opera conducting isn’t about beating time but about pacing a story. How would this same cast have performed with a sensitive conductor who understands the ebb and flow of Italian opera?”

“As Adina, soprano Leah Partridge is a lovely, poised woman with a light, pretty voice and sparkling high notes. A Georgia native, she made her Atlanta Opera debut in ‘The Barber of Seville’ at the Civic Center and has since sung small roles at the Metropolitan Opera. This is her first Adina.

“If she works hard, she has the makings of a substantial career. Right now, she can be a little sloppy, glossing over phrases, garbling her words and failing to project into the house. She’s got the pipes and star appeal; her issue is communication. The best singers have a gift for making everyone in the audience feel that they are singing directly to them. Partridge’s non-specific delivery — a Stepford Adina — deflated what’s so lovable about her role.

“Slow to warm up Saturday, tenor Bruce Sledge (top photo) made a sweetly plausible country bumpkin Nemorino. By Act 2 he was spot-on in pitch and emotion. He delivered when it counted most, tender and affecting for the opera’s biggest hit, ‘Una furtiva lagrima.’ In the aria, bassoonist Michael Muszynski, new to the opera orchestra this year, accompanied with haunting loveliness.

“The set — a spiffy-clean Tuscan village piazza, designed by Robert O’Hearn and rented from Indiana University’s Opera Theater — fit the space nicely but seemed underpopulated, even with Walter Huff’s disciplined chorus milling about.

“Perhaps the strongest fit all around was Peter Strummer’s Doctor Dulcamara, one of the great buffo roles in all of opera. A chubby man in a long, clownish turquoise coat (photo below), the bass-baritone was the only one on stage who sang with Italianate buoyancy. He also made a range of silly voices with funny body contortions, playing his comic quack to the hilt.