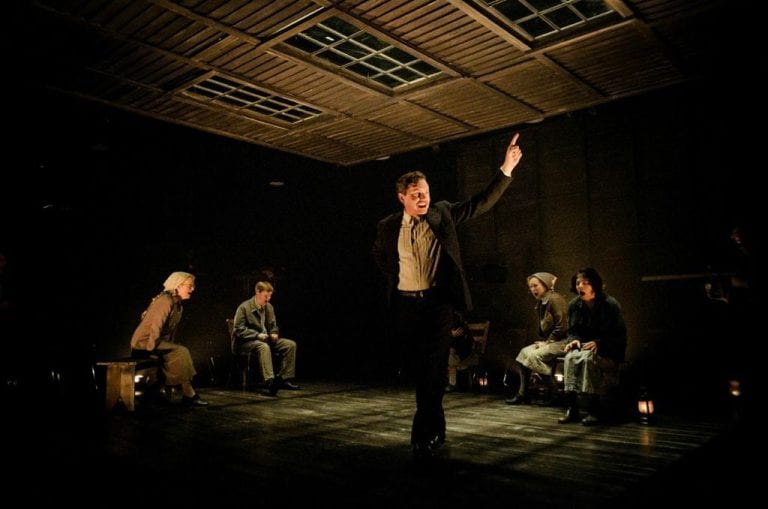 Edward Foote was the brainchild of Atlanta playwright Phillip DePoy.

Year in review: For Atlanta theater in 2015, a lot of highs and moments that came up flat

While there was plenty to like about this year’s offerings in Atlanta theater, many that didn’t rise to the occasion. It felt as though the scene went into something of a holding pattern.

ArtsATL theater critics Andrew Alexander and Jim Farmer took to an email exchange to have a conversation about what they saw in 2015 — their favorite shows, actors (take a bow, Carolyn Cook) and playwrights (Topher Payne, step up as well). They also discuss the shows that disappointed them, and why an emotional reaction from the audience remains theater’s greatest challenge.

Andrew Alexander: I felt there were a few great shows to really fall in love with this year but, overall, this didn’t seem like a particularly strong or inspiring year. You and I see more shows than just about anyone in town, so I’m curious to know if you felt the same about the big picture and if you have any guesses as to why it looks the way it does.

Jim Farmer: It was a very interesting year. I liked 2015 more than you. There were half a dozen or so really wonderful shows on tap and then a slew of good/worthy productions as well.

But you are right. There were some productions, high profile ones and smaller ones, that didn’t really work the way they should. The great news about Atlanta theater is that, even though we have lost some notable companies over the last few years, so many others are producing now. And their seasons are packed. But the consistency does seem to waver as companies produce more and more.

Alexander: Well said. Let’s discuss some of our picks for great shows of the year. Since you said you were more enthusiastic about the year’s offerings, I feel it makes sense for you to go first.

Farmer: Let’s talk plays first. My favorite was Horizon Theatre and Aurora Theatre’s comedy/drama Vanya and Sonia and Masha and Spike, Christopher Durang’s tale of three dysfunctional siblings. It was impeccably acted (with a cast including Tess Malis Kincaid, LaLa Cochran and Bill Murphey) and directed by Justin Anderson. Murphey’s closing monologue was the best 10 minutes of theater I saw all year.

Alexander: Silent Sky and Blues were definitely up there for me, too. Very different shows, but interestingly both are by women playwrights with strong connections to Atlanta, and both examined somewhat under-regarded historical situations with a lot of humor and intelligence. I was a big admirer of Actor’s Express’ Marcus; or the Secret of Sweet, which takes the top spot for me.

The playwright Tarell Alvin McCraney had a big success at the Alliance in 2013 with Choir Boy. The Actor’s Express production of Marcus somehow didn’t seem to get quite the same degree of attention and love from Atlanta audiences that Choir Boy did, but it was nonetheless pretty fantastic.

I also liked True Colors’ production of Fetch Clay, Make Man, which dramatized the real historical meeting of Muhammad Ali and the actor who played the comic stereotype, Stepin Fetchitt, in old Hollywood films. Again, another strong show that had some trouble finding its audience. Any favorites of yours that you feel may have slipped under people’s radar?

Farmer: Marcus was indeed a wonderful show. Theater Emory did a staging of Jose Rivera’s Marisol earlier this year that was fresh and engaging; one of the best shows I’ve seen there. Any more plays that didn’t get the love you thought they deserved? At some point I’d love to get your thoughts on the year in musical theater.

Alexander: I really admired a deliciously weird, one-off show Théâtre du Rêve did at 7 Stages called Celles d’en haut, a surreal, absurdist comedy about a woman exploring a bizarre sanitorium. As for musicals, Memphis seemed to be the one that hit it out of the park. Curiously, like your top pick among the plays, it was a co-production between two Atlanta theaters. That seems like an interesting strategy for challenging economic times: Two theaters share production costs and casts for a big show and then produce it back to back at each theater.

Memphis was at Aurora in August and then Theatrical Outfit brought it downtown to the Rialto in September. It seems like a win-win situation; people in town don’t have to schlep to the suburbs and vice-versa, the show has a bigger budget than either theater could invest independently, and artistically it seems to be working since the shows came out pretty decent. What were your thoughts on Memphis and what else was great in musicals this year?

Farmer: I adored Memphis. The only exposure I’d had of it previously was the snooze-fest touring version a few years ago, but Tom Key’s take here just clicked in every aspect. There are some musical numbers from that production I am still thinking about. It was definitely the stand-out musical of the year for me. I also enjoyed Brian Clowdus’ outdoor version of Evita. I also have to give a shout-out to Atlanta Lyric Theatre for doing some strong work in 2015. Their version of Young Frankenstein was a very pleasant fall surprise. What did you think of Tuck Everlasting at the Alliance?

Alexander: I was afraid you’d ask! Well, it wasn’t totally without charm but, overall, I found it pretty tough-going. I didn’t grow up with the story about a girl who meets a family of immortals and contemplates drinking from their fabulous fountain, so I didn’t walk in the door with a lot of affection for the thing as many people did. I found the concept silly, even a little sexist, and the music forgettable.

The only number I remember is one in which a pair of comic villains sang about never trusting a man in a yellow suit, a fun song but it had nothing to do with anything. The lead character, who is apparently somewhat isolated in the novel, had to talk out her problems on stage with a toad that responded in ribbits. Anyway, it was a big hit here, and it’s on its way to Broadway now, so it shows you what I know. Your thoughts? Anything that was a big hit with audiences you weren’t a fan of?

Farmer: I admired Tuck and I truly hopes it does well on Broadway. But it didn’t wow me either. Where was the emotion? I mean, there was more passion and energy in one look between Travis Smith and Naima Carter Russell in Memphis than in two hours of Tuck.

Everyone seemed to love Actor’s Express’ Rent and I liked it, too. I’m a sucker for the show and the music. But I will say it’s been a while since I’ve seen a production that had such an uneven cast.

Alexander: We can get back to some of our favorite shows in a sec, but why don’t we move on to some individual performances we liked? In that context, I’m dying to talk about Carolyn Cook, who wins everything as far as I’m concerned. She truly knocked it out of the park with her performance in Blackberry Winter. She also participated in the multi-year process of the show’s creation, so she’s doubly awesome. I just thought she was brilliant.

Farmer: I have long worshipped at the throne of Carolyn Cook. I think you liked Blackberry Winter more than I did, but she was amazing. It’s obviously very personal material for her. And let’s not forget the scene-stealing work she and Deadra Moore did in Silent Sky.

Alexander: Well, I liked BW a lot, but don’t label me a fan of the show yet. In my review, I more or less trashed that mole-egret thing but in hindsight, I feel I was much too gentle. Yes, Deadra was super fun in that role. Best actor thoughts?

Farmer: When Carolyn Cook is onstage, there is no need for anything superfluous around her, much less some pretentious mole-egret thing. For best actor, I’d say a tie between Bill Murphey in Vanya and Freddie Ashley in The Whale. You?

Alexander: I think I’d have to hand that one to Freddie Ashley. I also admired Rob Demery as Muhammad Ali in Fetch Clay and Tyrone Mitchell Henderson in Blues. Any thoughts for best director? I’d probably place that with Tom Key and Memphis. It was all quite an accomplishment.

Farmer: Yep! Tom Key, although I also really liked what Chris Coleman did with Edward Foote and David Crowe’s direction in Silent Sky. Thoughts on best actor and actress in a musical? To me that’s pretty easy — Travis Smith and Naima Carter Russell in Memphis. There was such joy in both of those performances.

Alexander: I’ll go with that, as well. Some other things worth mentioning before we close out: Aris Theatre did a fine Playboy of the Western World, the Atlanta Ballet did an interesting ballet version of Tennessee Williams’ Camino Real and the Seedling Project did a scary production of Genet’s The Maids. Atlanta playwright Topher Payne had a big year with a production of Perfect Arrangement in New York and a bunch of other stuff here at home, as well, including a drag performance in Die, Mommie, Die! and a world premiere at Stage Door, Let Nothing You Dismay.

Pinch ’n’ Ouch really captured the spirit of Annie Baker’s The Aliens. I continue to be really interested in the work Paris Crayton III is doing with his Rising Sage Theatre Company in the West End, and I think that will be great to watch in the new year, as well. Playwright Johnny Drago began collaborating with dancer Erik Thurmond, and the results were always interesting. Any last minute shout-outs or worthwhile things from 2015 I’m forgetting to mention? Anything you’re especially looking forward to in early 2016?

Farmer: Topher did indeed have an incredible year — does he ever sleep? I love that Aris is around and producing. I am also glad Shakespeare Tavern is still around — I enjoyed their well-cast Coriolanus this summer. One other show I wanted to mention was the national tour of Pippin, which lived up to all its hype.

Among productions I am really excited about in 2016, I’d have to say the Pulitzer Prize-winning Disgraced at the Alliance; Sweeney Todd at Actor’s Express; Moxie at Theatrical Outfit; Into the Woods at Aurora; Miss Saigon at Serenbe; The Toxic Avenger at Horizon; True Color’s American Buffalo and The Missing Generation at 7 Stages, by Sean Dorsey Dance out of San Francisco. You?

Alexander: I’m likewise looking forward to a lot of those shows, especially Sweeney and Buffalo. I’m mostly hoping to be taken by surprise and blown away by something great and unexpected in 2016 in a way that didn’t happen often enough for me in 2015.