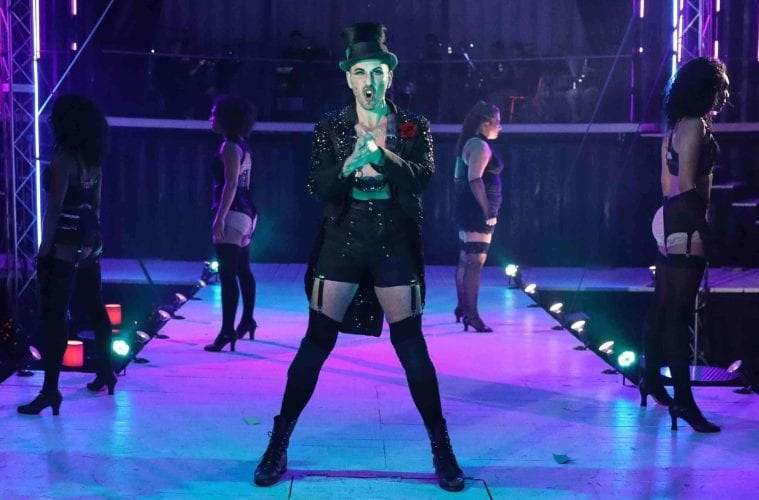 This was a busy year of theater, with world premieres popping up in every corner and local companies flexing their creative muscles. ArtsATL critics Andrew Alexander and Jim Farmer saw most of the major shows during the year, and share their reflections on the productions and trends that defined 2017 in Atlanta theater.

Andrew Alexander: Hey, Jim. 2017 is coming to an end, and it’s time to do our annual year in review. I’ll start by asking: Did you have a favorite show? Did something stand out for you as being the absolute hands-down best? Or did the year have a different sort of look for you than that?

Jim Farmer: Howdy, Andrew. I thought the theater year was a bit erratic, with a rich winter, spring and summer but a shaky fall season. For me, the finest production I saw all year was Serenbe Playhouse’s Cabaret. I found it to be thrilling and innovative on a musical level, with some ace performances — including that of Brian Clowdus, Heidi Cline McKerley, Lee Osorio and Robert Wayne. Beyond that, it was so eerily timely, with a punch to the gut that really separated it from everything else I saw in 2017. For me, it’s neck and neck with Hair as the signature work I’ve seen from the company. What excited you this season?

Alexander: We have the same top pick. Cabaret was a great match of a show to a company. It felt really timely, kind of glamorous, dark and sleazy in all the right places — a joy to experience. It was an impressive accomplishment on its own, but then a few weeks after it closed, the emcee and director of that show, Brian Clowdus, directed a production of works by Kurt Weill and Bertolt Brecht at the Maison Rouge nightclub for the Atlanta Opera, which was also a knockout. They made really nice, unexpected companion pieces. Jonathan Horne and Courtney Patterson excelled in The Crucible at Actor’s Express. (Photo by Christopher Bartelski)

Farmer: My second favorite show was another that felt ripped from the headlines — Actor’s Express’ The Crucible. It was impeccably directed and acted, especially from a never-better Jonathan Horne. His final scene hit me hard. I also loved the Alliance Theatre’s world premiere musical Troubadour, by Janece Shaffer. It was witty, enjoyable and filled with a terrific, versatile score by Sugarland’s Kristian Bush. Like a good country song, the production went down really easily. I’d buy Bush’s soundtrack in a heartbeat.

Alexander: Crucible and Troubadour were both close to the top of my list too. It sometimes felt like a weird shlep to the theater at the top of the year considering the political and cultural environment, but Arthur Miller’s play just seemed really incisive and creepy and right on target. Worth the trip, as they say. It’s strange that one of my favorite shows spawned one of my least favorites. I don’t blame any of the Atlanta creatives, who did their best with the material, but Abigail/1702, which purports to be a sort of sequel to The Crucible, was pretty much a solid train wreck. I guess it’s hard for a contemporary playwright to go head-to-head with Miller that way.

Two playwrights with Atlanta connections had very strong years both in the city and outside of it. Atlanta playwright Topher Payne had two world premiere comedies at Georgia Ensemble with Greetings Friend Your Kind Assistance is Required and Morningside (and then in a spare moment, he had some movies on TV and starred in a one-man show). Decatur-native Lauren Gunderson likes to keep busy too; she is now the most popularly produced living playwright in the country. She had several strong productions here, including Ada at Essential Theatre and Miss Bennet at Theatrical Outfit. And I loved Troubadour. Other Alliance musicals have gone on to Broadway, but it’s kind of sad that Troubadour hasn’t. It’s the only one where I could still hum you some of the tunes.

Farmer: I’m always amazed at what goes to Broadway and what doesn’t, and what actually succeeds there. I remember loving Bring it On here at the Alliance and expecting it to wow in New York and seeing it do anything but. But yes — kudos to Topher. Morningside featured two of my favorite performances of the year — that of Shelley McCook and Lala Cochran. I also adored Essential Theatre’s underrated Ada and the Memory Engine, which is in my top five of the year. I really liked the lead performance from Ashley Anderson. And I saw Miss Bennet this weekend and was quite taken by it. Gunderson is certainly the year’s MVP. Any other shows or performances that had you jazzed? Alexander: I thought Cardboard Piano at Actor’s Express was really interesting, and I hope to see more from the playwright Hansol Jung in Atlanta soon. Actor’s Express also did a strong production of Father Comes Home From the Wars (Parts 1, 2 and 3). Part 1 was a little shaky, which may have understandably put some viewers off, but Part 3 was stronger, and Part 2 was mind-blowing. And I believe we both pretty much had fun at Little Shop of Horrors at Actor’s Express during the summer. I liked Sense and Sensibility at Synchronicity, and their production of Eclipsed, as well.

Other critics in town were less enamored, but I liked the Alliance’s Tectonic production of The Temple Bombing. Speaking of the Alliance, what do you make so far of the “on-the-road” season the company is undertaking as its home venue undergoes renovation? Necessity is the mother of invention, and they’ve matched productions to venues in interesting ways. In my estimation, they’re pulling off a tough job, but somehow artistically I think that it may be more challenging than expected, a company that’s been in the same spot since forever making a full season of traveling shows. Oy. I didn’t see anything horrifically awful or anything like that, but you get the sense that life on the road is tough. Jury’s still out because we’re only a few shows in, I suppose. For me, a lot will rest on what the big production of Candide at the end of the season looks like. What have you made of the Alliance’s season on the road?

Farmer: I enjoyed Crossing Delancey, but neither one of us seemed to care for Shakespeare in Love much. Sadly, I missed the recent Hand to God. Look, I realize that a year of being on the road while your normal venue is getting remodeled isn’t a best case scenario, but if I’m honest, the greatest emotion I felt watching both — staged at the Marcus Jewish Community Center and Oglethorpe University — was the nostalgic feel of being at venues that hosted the late great Jewish Theatre of the South and Georgia Shakespeare. Kristin Markiton and Travis Smith each received Suzi Awards for their work in The Bridges of Madison County at Aurora Theatre. (Photo by Chris Bartelski)

Farmer: Another production I enjoyed in 2017 was Aurora Theatre’s The Bridges of Madison County. Its narrative isn’t its defining asset, but the sublime score and exceptional cast made up for it. Kristin Markiton’s role as a lonely Iowa housewife was a perfect fit for the actress. She and Travis Smith (as the visiting photographer she has an affair with) won Suzi Awards for the show. I also enjoyed the heck out of Actor’s Express’ The Legend of Georgia McBride. It was witty, light, campy and blessed with some snazzy musical performances and one of the year’s most unforgettable characters — Jeff McKerley’s Miss Tracy Mills. The year was also notorious for the protests over Out Front Theatre Company’s The Most Fabulous Story Ever Told. The religious outcry seemed silly for a show that is nearly 20 years old, but that’s Trump-ian times for ya.  What most people remember about the production now is how darn funny it was. I know we both liked it a lot. Any more standout moments for you?

Alexander: I had some reservations, but overall I liked Theatrical Outfit’s production of Simply Simone, which makes me extra curious to see the company’s upcoming production of Lady Day at Emerson’s Bar and Grill just ahead. I wasn’t crazy about Anna Ziegler’s script, but I admired performances from both Tom Key and Clifton Guterman in Theatrical Outfit’s Boy. I don’t think many people caught it, but I thought the one-woman show Throw Me On The Burnpile and Light Me Up at Aurora was adorable. Any other things you wanted to mention about the year in theater?

Farmer: I didn’t get to see many touring shows this season. (Atlanta’s busy theater calendar is a great problem to have — unless you’re constantly scurrying to see as much as possible.) But I did jam to the touring version of Hedwig and the Angry Inch. Yes — I was one of the geeky theater nerds singing along loudly to “Midnight Radio” and “Origin of Love.” Beyond that, I think this will be a year that is also remembered for some sad losses. Georgia Ensemble Theater’s Bob Farley passed away unexpectedly a few weeks ago — after announcing that this would be his final season as artistic director — and we also lost playwright and activist Rebecca Ranson earlier this year.  Both made sizable contributions to the local and national theater scene.

Alexander: Your pieces captured how serious those losses were. Thank you, Jim.

Farmer: Thank you, A! And cheers to a long theater season. Hope to see you soon at a show. Angels in America at Actor’s Express in January, perhaps?

Alexander: If I’m bawling my eyes out, I may ask you to look away, but yes, I look forward to seeing you there and elsewhere next year.

Farmer: Carolyn Cook as Hannah? O-M-G. See you soon! And I’ll bring you some tissue.