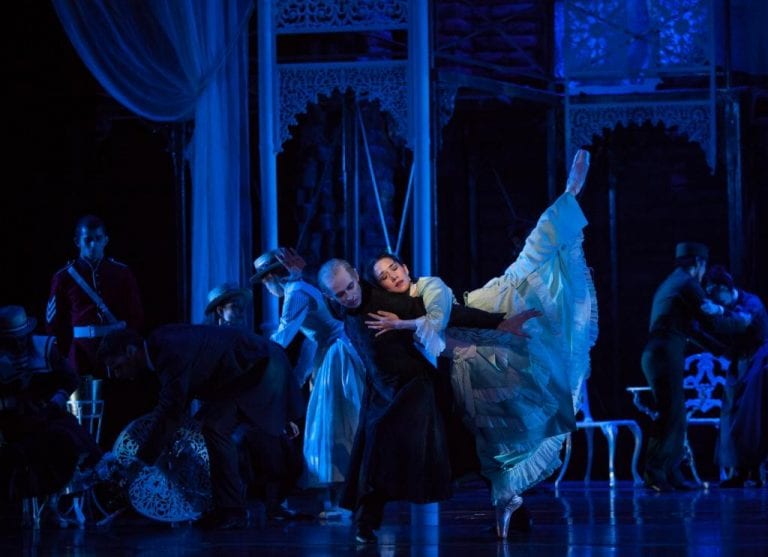 If the 2013 dance offerings shared common themes, they would be invention, honesty and commitment to expand into new territory. From Helen Hale’s solo choreography debut at Seven Stages to the Ailey troupe’s stunning show at the Fox Theatre, or from a small but inspired Modern Atlanta Dance Festival to a booming DanceAfrica Atlanta, the city’s venues were filled with dance artists pushing themselves and sharing their exhilaration with avid followers. ArtsATL’s dance writers Cynthia Bond Perry, Gillian Anne Renault and Kathleen Wessel look back on a few highlights.

“Prepare to be entertained!” was the lead-in for Emory University’s presentation of “Things you can’t do on the radio (a work in progress).” But the New York-based duo’s crowd-pleasing, high-energy performance — to music ranging from Ike and Tina Turner’s “Proud Mary” to a Rat Pack rendition of “My Heart Stood Still” — went much further than the Broadway- and Las Vegas–style singing and dancing it referenced. In the guise of glittery entertainment, Barnes and dancer/rehearsal director Anna Bass offered a fresh, personal and witty exploration of their ten-year partnership. With themes of endurance, triumph and trust, this interdisciplinary performance blindsided its audience with a zinger that went straight into the heart. — CBP

As artistic and executive director of the Modern Atlanta Dance Festival (MAD), Douglas Scott deserves a shout out for showcasing the work of Atlanta’s emerging and lesser-known dance makers for the past 19 years. The festival was poorly attended this year (at least on the first night, when I attended), which is too bad because the Valdosta-based SWADance Collective and T. Lang Dance (Lang teaches at Spelman) were definitely worth seeing, as was Scott’s own company, Full Radius Dance. This is not the cutting-edge stuff we see at Tanz Farm, nor does it present works in their entirety, but MAD is clear evidence that there is more happening on the Atlanta dance scene than many people realize. — GAR

“Baba” Chuck Davis, 76, has been presenting DanceAfrica at the Brooklyn Academy of Music in New York for 36 years, and in June of this year it finally arrived in Atlanta. Presented on the grand stage of the Martin Luther King Jr. International Chapel at Morehouse College, DanceAfrica Atlanta was a rousing celebration of dance, drumming and culture from nations such as Senegal and South Africa. It featured a few local companies and performers not often seen on the city’s main stages, including seniors, children and the award-winning, all-female drumming ensemble Giwayen Mata, which also hosted the event. The costumes were a blaze of color; the dancers were barefoot, grounded and scintillatingly alive. Let’s hope DanceAfrica Atlanta becomes a regular event. — GAR

“HIDDEN AWAY, the library at night” (August–September)

It took the imaginations of Nicole Livieratos and Philip DePoy to see a blank turning page in the curved white wall that wraps around the spiral staircase at the Decatur Library. Dancers in this entrancing movement/theater work appeared pressed flat against the wall in two-dimensional forms, like figures on a Greek vase. Then they emerged from the surface making rounded sculptural forms, as if vivifying ideas and images from the pages of books. It was one of dozens of vignettes that filled rooms and hallways of the library at night. Thoughts seemed to flit about as dancers swished through the hallways and evocative phrases filled the air. The overlay of images and ideas offered startling revelations on the power of the printed word. — CBP

I didn’t know what to expect from the Los Angeles–based Diavolo when it landed at the Ferst Center for the Arts for a two-night gig in September. The company’s showman and artistic director, Jacques Heim, is known for his preoccupation with let’s-blow-your-mind architectural set pieces; sure enough, he brought two of them to Atlanta: an innovative set of movable ramps and bridges for the skateboard-inspired “Transit Space” and an enormous silver orb in “Fluid Infinities.” The performers negotiated these forms with inspired athleticism and made full use of their diverse movement backgrounds: gymnastics, breakdancing, acrobatics, circus arts, jazz and modern dance. It was a thrilling ride. — GAR

One work that really impacted me this year was “Two Room Apartment,” performed by Israeli dancer-choreographers Niv Sheinfeld and Oren Laor at Tanz Farm in November. There was something profoundly moving about seeing Sheinfeld hold a naked Laor in his arms and a few minutes later watching this intimacy harden and shatter. A gay couple, Sheinfeld and Laor have succeeded in integrating their personal lives with their on-stage personas, with powerful results. There were political and militaristic overtones too — the men are acutely aware of living and creating in the tumult and uncertainty of the Middle East — but the work successfully integrated the private and the political, the hopes and fears of the one and the many. A lot for one work to carry? Maybe, but these images stuck with me long after leaving Goodson Yard that night. — GAR

Since Helen Hale returned from Philadelphia to her home town of Atlanta four years ago, the 28-year-old dancer-choreographer has made a unique impression on the local dance scene, building a solid body of original work. But none to date was as ambitious or courageous — and well-conceived — as “Sanity Ceremonies” at Seven Stages. This interdisciplinary work explored Hale’s personal struggles as a young independent artist, her Greek ancestry and cultural heritage, and the human need to find serenity in a chaotic world. Integrating video, props and animation into her conception, Hale pinned her personal narrative to larger ideas of myth, ritual action and Greek folk dancing, showing its broader relevance. Ultimately, her inspired work demonstrated what it means to live a conscious, creative and joyful life. — CBP

Atlanta audiences are accustomed to the Cirque du Soleil’s world-class acrobats and fantastical theatrics. But the return of former Cirque artist Meaghan Muller, a growing local aerial dance community and the uniqueness of Goodson Yard helped galvanize forces to create something new. “NoNet,” an intimate contemporary circus, received its premiere at the Goat Farm Arts Center and featured Muller, members of D’AIR Aerial Dance Company and nine professional circus artists — many of them friends from Muller’s Cirque years. These performers invited the audience into their personal lives and showed the deeper artistry and intimacy that’s possible when commercial razzmatazz and fantastical conceptions are stripped away from a circus production.

Muller showed she is as much an expressive dancer as an acrobat in a reflective, gravity-defying artistic pole piece; Duo XY of Seattle explored elements of risk and trust, taking trapeze artistry into an elevated exploration of human relationships. Hugo Ouellet-Côté’s soaring aerial straps solo held both personal and spiritual dimension. Rising into the air on her cerceau, Muller created a dazzling and radiant centerpiece that energized the evening with a shared sense of devotion — not only to the art, but also to one another. — CBP

Best Signs for Dance in Atlanta:

Helen Pickett was on Dance Magazine’s “25 to Watch” list in 2007 and since then has become an increasingly sought-after choreographer in the United States and Europe. This year she was named Atlanta Ballet’s choreographer-in-residence. She is a perfect match for the company as it sharpens its repertoire. Unlike many traditional ballet makers, Pickett gives the dancers choices and responsibilities for their roles, and it shows in their joyful commitment to the works. Her “Prayer of Touch” encourages the dancers’ personalities to shine in unexpected and witty ways. Her “Petal” routinely inspires standing ovations. Her next ballet, “The Exiled,” will have its world premiere in May 2014; in the spring of 2015 we’ll see her ambitiously take on the Tennessee Wiliams classic, “Camino Real.” — GAR

The “performance anthology” of Tanz Farm continues to challenge and energize Atlanta audiences with cutting-edge work from local, national and international artists. In 2013, this remarkable performance anthology ended its first season at the Goat Farm Arts Center and began its second, transforming Atlanta’s dance and arts scene in brilliant and extraordinary ways. Co-curators Lauri Stallings and Anthony Harper introduced us to Amanda K. Miller (former choreographer-in-residence at Ballett Frankfurt) with the dancers of Atlanta’s CORE Performance Company; Israel’s Niv Sheinfeld and Oren Laor; the amazing Sidra Bell Dance New York; and Stallings’ own company, gloATL, in “Hippodrome” and “The Social Animal.” Visual and musical artists are part of the mix too. Add to this the free public workshops, panel discussions and interactive learning experiences that Tanz Farm offers and you have a vital arts community that encourages us to be participants in the process, not just casual observers. — GAR

Beyond the Ailey troupe’s annual run at the Fox, classic, Horton-based modern dance at the local level is surprisingly underrepresented in the city’s professional venues, though good teachers can be found. Dance Canvas connects the community’s well-trained dancers with choreographers — in many styles and genres — and provides them with a professional venue and support. Last summer, Atlanta-based choreographers Tracy Vogt and Lonnie Davis put together “Cocktails and Choreography,” an informal but significant concert at Fabrefaction Theater. Works by Antonio Sisk, a local dance teacher who died in 2009, were a meaningful program highlight. Dance Canvas will present its annual showcase at the 14th Street Playhouse January 17 and 18, featuring works by 10 emerging choreographers. — CBP

Best Performance by a Dancer:

In January 2012, Atlanta Ballet’s Rachel Van Buskirk was named one of Dance Magazine’s annual “25 to Watch.” In 2013, she showed us why. She was a standout in the company’s contemporary ballets, but her tour de force was as Lucy Westenra in the gothic, full-length “Dracula.” She not only mastered Michael Pink’s challenging choreography, which is more difficult than it looks, but embodied the character in every lift, turn, jump and gesture. As Lucy spiraled from charming innocence to hungry, blood-stained undead, Van Buskirk made us believe. A masterful achievement, and a reason she was one of ArtsATL’s “30 Under 30” creative talents in Atlanta. — GAR

Best Show of the Year by an Atlanta-based Company:

Atlanta Ballet found its groove this year, with a stunning repertoire that’s expanding into new contemporary styles. The question was whether a relatively small company of dancers could fulfill the challenges of such a varied repertoire. This March program showed that they could. Perhaps because of a three-year commitment to Ohad Naharin’s repertoire — and his fluid, inside-out approach to movement — dancers tackled each work’s physical, emotional and musical challenges with centered confidence and deeply focused intent. They radiated individuality in Christopher Wheeldon’s neoclassical “Rush”; dancers gave Gina Patterson’s “I Am” an emotionally driven lyricism; and Naharin’s “Minus 16” had just the right intensity, unpredictability and punch. — CBP

Best Show of the Year by a Touring Company:

The Ailey troupe has been a much-loved visitor to the Fox Theatre for many years, and when artistic director Robert Battle spoke to the audience on opening night this year you could feel the love. As always, the packed houses never seemed to get enough of Ailey’s iconic “Revelations,” but Battle, now in his second season as artistic director, is expanding the repertory to good effect. The company performed contemporary works by other choreographers, among them Garth Fagan’s “From Before,” Ohad Naharin’s alternately funny and powerful “Minus 16,” and two by Battle himself. Every year, the dancers seem to take it up a notch: can they get any more brilliant, bold and athletic? We’ll see when they come back in February 2014. — GAR