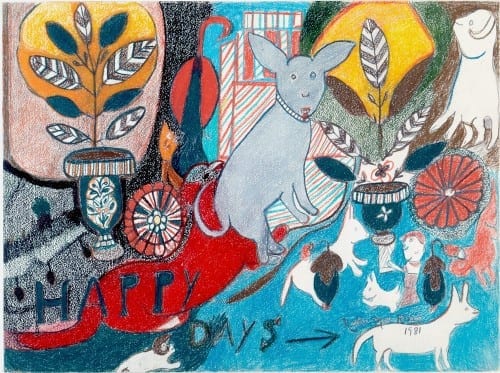 Covid almost went away in 2021. And then it didn’t. The Atlanta art world pivoted (again) and for the most part galleries, art museums and alternative spaces stayed open, delivering new exhibits and launching or enhancing their online presence as art lovers got more comfortable buying online.

Several galleries moved to Miami Circle, making the street a mini art mecca. Marcia Wood Gallery, September Gray Fine Art and Mason Fine Art decided to share space – a smart cost-cutting measure — and the edgy, peripatetic Eyedrum Art and Music Gallery reopened in its new downtown space in October. 2021 was a good year for street art as festivals such as Forward Warrior, Stacks Squares and Elevate Atlanta came back in full swing, apartment complexes used murals to beautify their properties and socially-conscious murals continued to pop up throughout the city.

This year saw an influx of money from outside and sometimes new sources. LaTanya Richardson Jackson and her husband Samuel L. Jackson donated $5 million toward the renovation of Spelman College’s John D. Rockefeller arts building. The Hobson/Lucas Foundation followed suit and contributed $10 million. Bank of America and descendants of Rockefeller gave $2 million and $300,000 respectively.

Atlanta-based South Arts announced a partnership with the Ford Foundation, which is donating $6 million to a four-year initiative designed to fund arts and cultural organizations in the Southeast led by, and designed to serve Black, Indigenous and people of color.

MacKenzie Scott, ex-wife of Amazon founder Jeff Bezos, gave away $2.74 billion of her fortune. Sixty arts and culture groups, in the United States and internationally, benefited from her unprecedented generosity. South Arts and Atlanta Music Project were among the local beneficiaries.

Atlanta artists mourned the passing of the much-loved artist and teacher Larry Jens Anderson, who died in August. One of the four gay, male mavericks who founded the provocative TABOO collective in the 1990s, he also mentored many artists.

2021 Atlanta Biennial: Of Care and Destruction

The 2021 Atlanta Biennial: Of Care and Destruction at Atlanta Contemporary captured the zeitgeist of the recent past when it opened in February 2021. Reflecting a year of global pandemic, major reckonings with structural racism and political events of seismic proportions, the exhibition spoke to us of grief, loss, isolation and struggle. Curated by Dr. Jordan Amirkhani of American University, the biennial — which included 30 artists from across the Atlanta region and the Southeast, most of them Black, Indigenous and people of color — affirmed Atlanta Contemporary’s new model of presenting diverse curatorial voices. This was the best-conceived and -installed Atlanta Biennial since its 2016 resurrection. The equally well-curated Virtual Remains, organized by TK Smith in adjacent spaces, made for a fine complement. — LES

In the spring of 2021, Art on the Atlanta BeltLine transformed five bridges on the Eastside Trail into walk-through immersive art experiences for their third annual BeltLine Walls exhibition. These murals are a must-see because their impact multiplies as your spatial relationship with the artwork changes, constantly revealing new vistas and perspectives. Alex Brewer (aka Hense) painted dynamic and colorful abstract shapes under Virginia Avenue. Brandon Sadler (aka Rising Red Lotus) created a multi-panel graphic novel on North Avenue. Mister Totem painted a menacing Tactical Dreadnaught Lettermech graffiti piece in a desolate setting on Ralph McGill Avenue. Jenevieve Reid explored masks as representation of the spirit world under North Highland Avenue and Lisette Correa (aka Arrrtaddict) taught us about the Taino people under Edgewood Avenue. — AR

Despite a debatable premise, the High Museum of Art’s Calder-Picasso delivered a captivating visual and art-historical experience. The panoply of paintings, sculptures and reliefs not otherwise available here were a pleasure to behold, and they created a vivid portrait of artists’ creative character, in many ways in counterpoint to the other. Pablo Picasso was earthly, engaged with the figure and the human condition. Alexander Calder was up in the air, from his gravity-defying wire acrobats to his (literally) groundbreaking mobiles. Perhaps the show’s greatest gift was to see Calder for the radical he was before his signature creation became dulled by ubiquity. — CF

What lasted, what made its mark, got under my skin and stayed with me? Hands down it was the last series of photographs in Bey’s career retrospective at the High Museum, Night Coming Tenderly, Black from 2017. Bey (re)imagined sites in Ohio along the last way stations of the Underground Railroad. Shot by day, these photographs are printed in blacks and dark grays, giving them a sense of night and its attendant mysteries and dangers, an approximation of the sense of longing, desperation and desire for the distant comforts portrayed here — a picket fence, a lighted window, home. Bey took his title from the last line in “Dream Variations,” a poem by Langston Hughes: “Night coming tenderly/Black like me.” A reminder that poetry comes in many forms. — DM

I have been in the thrall of this work since seeing the artist’s cut-mirror sculpture at the High Museum two years ago. The glittering wings have a gravitational pull that compelled me to visit the High throughout the pandemic, just to bask in their incandescence. A seamless blend of antiquity, modernism, mathematical precision and virtuosity, the static installation compels the eye to move . . . if not dance! The Persian architectural motifs that informed the artists’s refined sensibilities upend reductive depictions of Iran that persist in Western media today. Most importantly, the levity of Farmanfarmaian’s expression reminds me that no matter how dim the forecast, we still get to choose whether to be a reflection of darkness or a source of light. The High’s Monir Farmanfarmaian: A Mirror Garden exhibit, postponed last year due to Covid, is tentatively rescheduled for late 2022. — GO

One Entanglement, Under Clouds

Erin Jane Nelson’s exhibit at MOCA GA stood out due to its interdisciplinary approach and depth of research. It merged ceramics with other materials, including colored lights that illuminated her sculptural work in the dimly lit gallery for a striking effect. The content derived from her investigation into the decline of frog populations, most likely due to the invasive chytrid fungus. Nelson asked us to consider both the plight of the amphibians and the invasive species. On view during the Covid crisis, her work drew attention to the many pandemics in the natural world that we often ignore. It was both contemplative and a call to action. — RB

One of the rewards that comes from living through times such as these is the art that comes from them. This exhibit by Timothy McDowell at Marcia Wood Gallery was the best thing to come out of the Covid lockdown. It reminded us that art can help make sense of the trials, or at least offer some perspective to help navigate them. McDowell delivered a fabulously painted modern-day journey of contemplation through/of our time. — DM

This signature exhibit at the High Museum highlights some of the best work produced by contemporary photographers about the South. This is no minor accomplishment for the High, which has commissioned emerging and mid-career photographers since 1996. It has helped the institution build its photography collection, which acquired more than 300 images from the initiative. It has also been transformative for a number of artists’ careers, marking major transitions in their work. The projects presented are multifaceted, inventive and nuanced. They offer a fascinating perspective of the region’s social and geographic landscape. — VK

If the High Museum serves armchair travelers, bringing art to Atlanta from beyond our community, it also embraces its civic responsibility to honor the art created in our midst. The latest such effort is Really Free: The Radical Art of Nellie Mae Rowe, on view through January 9. The late Vinings artist has long been deemed a treasure, and the High owns an extensive collection, some of which is permanently on view. But this show is a difference in kind, distinguished by breadth, depth and the curatorial analysis of the High’s Katherine Jentleson. It not only regales the viewer with Rowe’s expansive artistic imagination and her joyous colors, but also reveals the serious thought behind the playfulness. — CF

Curator Madeline Beck’s approach to the four elements of antiquity (fire, water, earth and air) offered a refreshing take on presenting local artists and contemporary global themes of race, gender and culture. The exhibition at the Marietta Cobb Museum of Art paid homage to the unconventional in materials and methods, such as sculpture made from plastic debris from the ocean, sea salt depicting ice and molten metal combined with wood. It also raised subtle social issues, as through textiles incorporating African designs using a technique bequeathed by colonialism. Unusually sensitive juxtapositions of works and clear, concise wall texts also contributed to making the show a brilliant model for future methods of aesthetic exploration. — JC

The Labor of Remembrance: Print and Textile Works by Louise Bourgeois

This was one of the year’s best exhibitions in Atlanta, if only to see Bourgeois’ Pregnant Woman, 2002, which sits inside a glass vitrine on a pedestal. The work is a small pink fabric sculpture of a headless and armless female torso, clearly pregnant and covered in soft pink terrycloth, stuffed like a child’s toy. Bourgeois’ incorporation of a domestic linen that she may have used herself invites the viewer into an intimate relationship with this sculpture and, through it, with the artist. Even on a small scale, the sculpture projects a powerful symbol of a woman whose strength is codified by the straightness of the figure’s spine while clearly with child, an image of a strong maternal female. — DS

The Visitors by Ragnar Kjartansson

This video installation depicted a group of musicians playing together from different rooms of a mansion in the optimistic atmosphere of 2012. The High Museum of Art brought us this work in 2021, exactly when we needed it most. After a year defined by the pandemic, The Visitors was even more poignant for those who had been separated from families and friends — like the musicians in their individual rooms. This time of isolation, grief and loss is not over, but works of art like The Visitors can help us heal. It’s a work that celebrates the friendship of people who are both alone and together, like a giant Zoom that gallery-goers can walk around in, be part of, and through which they can experience the warmth of human presence. — DS

Walking Through the Desert with My Eyes Closed

Many of Nancy Floyd’s works are elegies to time and memory. Her internationally acclaimed Weathering Time, which includes photographs, videos and an artist’s book, unflinchingly examines the aging female body with herself as a model. In contrast, Floyd’s Walking Through the Desert with My Eyes Closed at whitespace counterpointed the narrow human experience with the unfathomable sense of time within the natural world, in this case in Death Valley National Park in California. Significantly expanding her experiments with lens-based media, Floyd beautifully interwove photographs, videos and installations encapsulating her sense of aloneness, which also references her parents’ deaths, with the stark desert beauty. Her tour-de-force floor projection, for which the exhibition is named, takes us on one of her walks along the floor of the desert, recalling sadness as well as hope. — LES