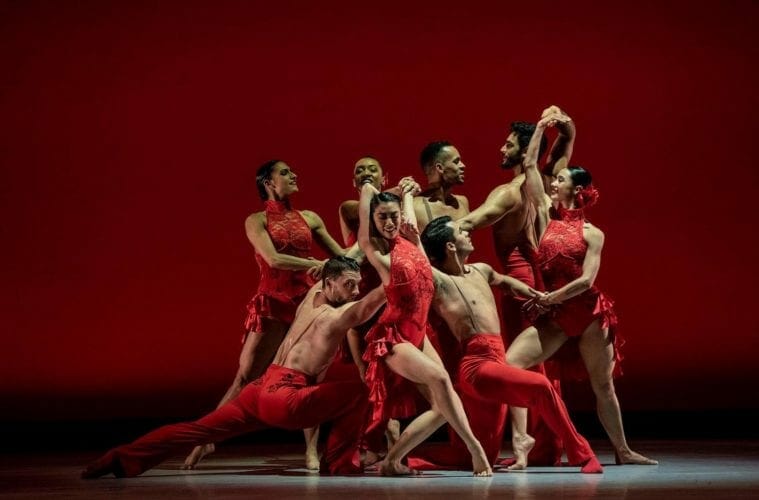 The Ballet Hispanico performance in January was one of the year's best moments in dance. (Photo by Judy Ondrey)

Year in Review: Atlanta dance came of age in 2019, for companies both large and small

In many ways, 2019 in Atlanta’s dance world was the culmination of forces that have been building the entire decade. Atlanta Ballet took its highly praised new production of The Nutcracker to the Kennedy Center in Washington, D.C., marking a high-water mark thus far in the tenure of artistic director Gennadi Nedvigin.

But the year also saw high-quality original productions for thriving independent companies. Terminus Modern Ballet Theatre continues to enthrall audiences with its world-premiere pieces, largely by in-house choreographers Tara Lee and Heath Gill. And new works by Core Dance, staibdance and Fly on a Wall and Kit Modus, among others, show that Atlanta has entered a new era where high-quality dance is no longer limited to Atlanta Ballet.

Atlanta Ballet unveiled its new $3.7 million production of The Nutcracker in 2018 at the Fox Theatre and in November took the show to the Kennedy Center for the Performing Arts. “It’s a huge achievement for us and an honor to be invited to perform on this prestigious, international stage,” Nedvigin said of the company’s debut at the nation’s art center. In Washington, as in Atlanta, critics loved the ballet. As one Washington Post dance critic gushed, “. . . just about every detail of the standard holiday ballet is whomped up, rethought and mined for either laughs or meaning or both. I have seen a lot of ‘Nutcrackers,’ and this one, created by Yuri Possokhov, resident choreographer at San Francisco Ballet, tops them all as the most entertaining as well as the smartest.”

The ballet announced that the 2019 Christmas run at its traditional venue, the Fox Theatre, was the last. Next year, Atlanta Ballet begins performing The Nutcracker at the Cobb Energy Performing Arts Centre. — SF Rain beat down on the Westside Cultural Arts Center’s roof on a November afternoon, but it didn’t dampen the spirits inside the parking garage-turned theater for Terminus Modern Ballet Theatre’s two-year retrospective, looking back | MOVING FORWARD. Since Terminus’ founders first envisioned their own company in that space, they have produced an impressive repertoire and grown into a leading force on the local scene, performing at a level of craftsmanship and finesse that should place them among nationally recognized contemporary ballet troupes.

The program celebrated Terminus’ growing school and partnership with Kennesaw State University (full disclosure: Cynthia Perry teaches at KSU) and showcased excerpts from several original works. Each piece revealed a sophisticated attention to detail, remarkably facile technique and in-the-moment connection between performers and audience. The effect was electric, especially in a duet from Tara Lee’s The Vertical, performed by Rachel Van Buskirk and Christian Clark. In rhythmic succession, gentle touches — to a partner’s arm, shoulder or waist — led to supported embraces and turns. Gestures gave rise to varied lifts, each a crystalline note in a melody of discovery, with emotional resonance and empathy wrapped into every moment. — CP

In March, the Rialto Center for the Arts’ Off the EDGE offered audiences the chance to see various performances at multiple venues throughout Atlanta. Curated by Ilter Ibrahimof of Fall for Dance North and Terminus Modern Ballet Theatre’s John Welker, the festival featured a range of artists, including both local and national companies.

At Westside Cultural Arts Center, ImmerseATL gave audiences a glimpse of a work in progress, performed by artists from its training program, while Fly on a Wall presented the polished and hilarious Byte. The next evening, in the more traditional theater setting of the Rialto, a 3.5-hour-long performance featured Company Wayne McGregor, KSU Dance Theater, Ephrat Asherie Company and Rosie Herrera Dance Theater. A highlight, Carne Viva by Rosie Herrera Dance Theater, emphasized the strength and artistry of the dancers with difficult, statuesque partner work and theatrical elements. In one moment, the three female dancers used slices of white bread to soak up the sweat of their male colleague. With gasp-inducing lifts and unique interactive gestures, the piece encouraged a deep questioning of life and relationships. — SB

Kinetic Light, a New York-based project ensemble composed of disability artists Alice Sheppard, Laurel Lawson (of Atlanta) and lighting designer Michael Maag, brought this innovative work to Georgia Tech’s Ferst Center for the Arts in November. Sheppard and Lawson both perform in and out of wheelchairs, and combined with an evocative visual environment and multilayered audio description, the work showed how disability can catalyze an art form to new levels of meaning and innovation.

Against a backdrop suggesting an infinite universe, or a mountain-sea landscape of a distant planet or mythic realm, Sheppard and Lawson moved in and out of wheelchairs, their love story unraveling on a precariously contoured ramp system. Inspired by Rodin’s sculptures, they rolled and crept, folding their bodies over the platform’s peaks and one another. With wheelchairs, they spun, tilted and lifted each other in counterbalance. The dancers rolled up an incline and rode back down with a cadence that spoke of Greek poetry. Wrists clasped, the two revolved around one another like arms of a galaxy rotating in perpetual motion. — CP

Supple Means of Connection at the High Museum of Art

This year, Lauri Stallings became the first choreographer named an artist in residence at the High Museum of Art. Her canvas: the museum and its grounds. Her vision: a sprawling “suite of live art” that included roving public artwork and a large-scale installation in the Cousins Gallery. Artists from glo movement and such luminaries as writer Pearl Cleage and photographer Lucinda Bunnen were joined by a cadre of female performance artists and children, along with visitors who interacted with the work. Supple Means of Connection coincided with glo’s 10th anniversary, after which it debuted at the 2019 Florence Biennale, receiving first prize in the International Award “Lorenzo il Magnifico” performance-art category. With remnants of past works juxtaposed and overflowing with memories, Supple Means of Connection seemed an apotheosis of 10 prolific years of startling creations. As for glo’s movement artists, the seven women of unfathomable strength (the installation ran all day, six days a week for more than five weeks) wove throughout the space, hips subtly shifting, feet tapping rhythms, arms curving like goddess figures. It felt as if they had distilled human compassion into an elixir that filled them with its concentrated essence. Supple Means’ effect was more than immersive — a viewer could feel saturated by it. And upon re-entry into the everyday world, each encounter was charged with metaphor, the world itself a magnificent work of art.  — CP

Sue Schroeder, Core Dance founder and artistic director, described her if . . . a memoir as “a love song to humanity” and an ode to seeking true human connection in a culture where social media has become the connecting point. At the end of one performance at The B Complex in late October, the audience applauded, and then almost every single person stayed in their seats for a minute or two to process what they’d just seen.

The piece used compelling video imagery by Adam Larsen and music and light design by Berlin-based composer Christian Meyer and featured poet Sarah Turquety reading her original poem (mostly in French) as Core dancers swirled around her. The piece was evocative as the dance artists attempted and failed to find human connection with one another and with the natural world. Schroeder’s piece was a signpost for the times, and we can’t wait to see the second part she has promised. — SF

Kalpana: An evening of Odissi

Bijayini Satpathy, one of the finest proponents of the classical Indian dance style Odissi, performed her solo concert, Kalpana, in October at Duluth High School’s auditorium — a performance that was by turns spellbinding and mesmerizing. Through a facile language of curved sculptural postures, focused gestures and compelling facial expressions, Satpathy embodied mythic characters that ranged from a girl passing into womanhood to a five-year-old god Krishna and his doting mother, then from a mature Krishna with his lover, Radha, to a demon in his terrifying chariot riding into the sky. Kalpana means “imagination,” and in Satpathy’s work, a spectrum of feeling enlivened the stage, heightening the senses and satisfying the soul. — CP

The Third Dance at 7 Stages

There was a quality about The Third Dance, the original piece created and danced by the Israeli duo of Niv Sheinfeld and Oren Laor (along with Core Dance artists), that continued to resonate long after it was performed in February. The Third Dance dissected the impact of childhood memories and how those early impressions will inform romantic relationships. The piece was intimate, playful, flirtatious, irreverent and surreal, but most of all, vulnerable and emotionally honest. The ending, in which Sheinfeld and Laor smash the heads of flowers against the floor in a metaphor for a romance coming apart, was powerful and memorable. The Third Dance took risks, and they paid off. — SF

The challenge of staibdance’s fence

fence, which had its world premiere in October, is an important work for staibdance on two levels. First, it received a $45,000 grant from the New England Foundation for the Arts for its creation and a national tour. On an artistic level, it was among the most memorable original pieces debuted by an Atlanta company. The piece is based on an incident that choreographer George Staib (staibdance founder and an ArtsATL contributor) witnessed as a nine year old at the Tehran American School, where two anti-government terrorists lured two teenage boys to a remote part of campus and fatally stabbed them. As ArtsATL’s Perry wrote in her review, “In fence, Staib has translated the experience into a dense, nonlinear, multilayered investigation of power — what it means to take it and to lose it — and then, how to get it back. With that idea is the idea of ‘otherness,’ the dismissal of personal histories and the theft of joy, freedom or life itself. fence also looks at the callousness that power can breed.” As Perry noted, fence was not an easy piece to watch. It challenged the audience to experience a darkened realm where power is ominous and escape can seem improbable. — SF

Ballet Hispanico at the Rialto

The choreography throughout showcased the dancers’ incredible talent and athleticism, using such props as fans, sombreros and colorful skirts to emphasize themes and patterns in the movement. The works offered a refreshing variety of styles, including flamenco, Afro-Cuban social dance and traditional Cuban dances, all presented with a contemporary spin. With a cast of stunningly technical and performative dancers, the choreography came to life in a way that was equally impressive and thoughtful. — SB

In the raw, beautiful space of The B Complex, Atlanta Dance Collective presented a memorable work of the ups and downs of life in February. IMPRINT, choreographed by Atlanta Dance Collective coartistic director Sarah Stokes, explored the kind of personal growth that can only come from struggle and heartbreak. The 11 dancers here combined athletic partnering and gestural group phases to push their bodies to their limits while embracing the emotional nuances of the choreography.

A large metal structure created by Danielle Rose defined the space, and an additional performer, Hannah Stokes, recited poetry that inspired the concept behind the evening-length work. Dancing to original music by Jonathan Maiocco, the performers physically reacted to Stokes’ words. They interacted purposefully with the sculpture, ensuring that it didn’t exist as a backdrop but as an essential part of the performance. With IMPRINT’s combination of spoken word, dance, sculpture and music, Atlanta Dance Collective successfully presented an evening of both physical exploration and honest emotional expression. — SB