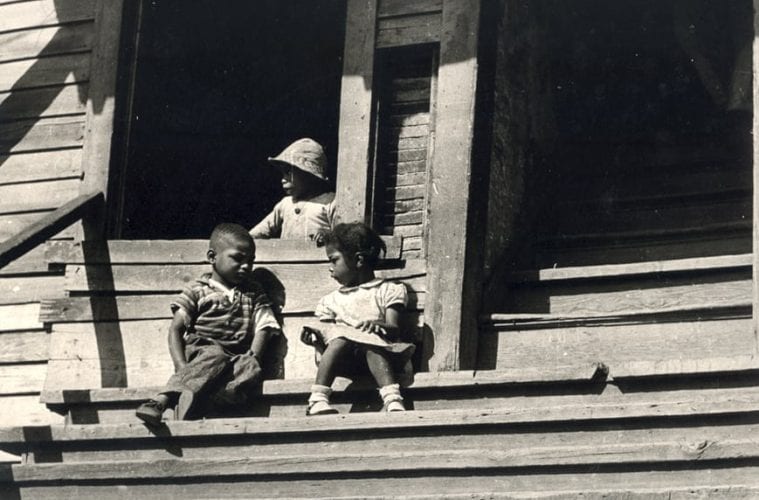 Toward the end of his life, Walker Evans declared that he hated museums and preferred the streets. Like Evans, many photographers have found inspiration from photography’s ability to instantly and candidly capture the truth of everyday city life: Eugene Atget, Helen Levitt, Garry Winogrand, Stephen Shore, Robert Frank, Diane Arbus and most recently, the secretive photographer Vivian Maier, whose trove of thousands of images was discovered only after her death. Rusty Miller: The Compassionate Eye in Forgotten Atlanta, a selection of 50 vintage silver gelatin prints curated by Susan Todd-Raque on view at Atlanta’s Gallery 72, earns Atlanta photographer Russell Stough Miller (1933–1992) a place at the table with them all.

Miller was known to most as a commercial photographer. He grew up in pre-civil rights Buckhead in north Atlanta, the domain of what most there would have proudly called “old Atlanta.” Encouraged to join his family’s established printing business, he chose instead to make his way in the world of commercial photography, opening his own business in the 1960s. What he will be remembered for now by those who experience his work in this exhibition, however, are the photographs shown here, the ones he made on the weekends, following his passion into the old Atlanta that many of his own neighbors probably would not have been able to locate on a map – among them the Old Fourth Ward, Vine City, Buttermilk Bottom and Summerhill, the neighborhood demolished to build Fulton County Stadium. The work arrives, like Maier’s, to the public eye only posthumously. The photographs – of people on buses, children on stoops, children at play, men and women alone, sitting together on the porch, gathered in the street, talking — were all undated and untitled. He never exhibited them, and save for a few he gave to friends, he never sold them. Allen Mathews, Miller’s friend, business partner and fellow photographer, stored Miller’s photographs and negatives and gave them to Miller’s ex-wife Peggy upon Miller’s death. Peggy kept them in a safety deposit box, where they remained until they came to his daughter Elizabeth Stepakoff, who brought them to Todd-Raque’s attention. Through them, 25 years after his death and 50 years after they were made, Miller delivers an indelible and faithful record of a time and place, a place here in the heart of our city, one that many of us never knew and now never can know, for so much of has been erased by urban development and gentrification. In a time when images of the Civil Rights Movement often and necessarily eclipsed those of ordinary domestic and community life in black neighborhoods, Miller walked the streets and came to know the people and places he photographed with an intimacy that translates onto the paper. He didn’t make them for money, since he never sold or exhibited the work. It seems that he made them for the sheer love of doing, which is not to say that he did not possess a formalist’s eye as well. They are all good photographs; many of them are great.

Comparisons to Maier’s work seem obvious, especially the photographs’ posthumous arrival, but Miller’s work, though relatively unknown, was no secret to those who knew him well, and his images possess more empathy, less neurosis than the near-obsessive voyeurism in hers. They have the curiosity and vision of Robert Frank’s The Americans photos of the Deep South, or closer to home, the familiarity of Oraien Catledge’s images of residents of Cabbagetown in the 1970s. Others, especially those showing the faces of the children, find kindred spirit in the work of Helen Levitt’s photos of children at play in 1940s New York City.

In a prefatory essay for Levitt’s photographs in the book A Way of Seeing, author James Agee argued that “the task of the artist is not to alter the world as the eye sees it into a world of aesthetic reality, but to perceive the aesthetic reality in the actual world, and to make an undisturbed and faithful record of the instant in which this movement of creativeness achieves its most expressive crystallization.” Agee’s faithful record is exactly what Miller has given us, but his task seems not to have been work at all. In the photos is joy, curiosity, compassion and something of a prescient nostalgia, an anticipation of looking back on something before it has gone, a quality that likely springs from the simple act of seeing and looking deeply. His profound empathy for his subjects shines through without a shred of sentimentality. Miller’s Bus Riders series, a title given by Todd-Raque, as are all titles, for the necessity of distinguishing or identifying them, resembles Walker Evans’ Subway Portraits (1938–41). Like those famous shadowy images Evans made of fellow passengers, Miller captures his in states of concentration or repose, paired or alone. Evans, like Maier, often did photograph covertly, but Miller’s images seem to reveal a nature open, engaged, but never intrusive or predatory. He honors the humanity in each, and in one of the best, he locates it in the weary elegance of a tired woman holding her head, regal in dark relief, against the glare of a bus’ window panel.

Save for a very few in this series, such as the shadowed face of a grocer in Untitled (Gathering near grocery store, #1002), and Miller’s own self-portrait, most of the faces in the exhibition are black, as were these neighborhoods of de facto segregation in the midst of the still-nascent Civil Rights Movement. Miller’s own face winks at us from an exterior wall of the first gallery in a sweetly comic self-portrait of the photographer sitting on an upturned bottle crate in a makeshift straw hat. Its endearing levity illustrates why friends and family called him “crazy and kind,” yet it also manages the gravitas of a Berenice Abbott portrait. The children’s faces in his work portray a pleasure in discovery, in making do with the simplest of objects available –  discarded tires, a crate with wheels, sticks – and intense absorption in the present. Miller manifests Eudora Welty’s belief that a good photograph captures transience and stops “a moment from running away.” By preserving these fugitive childhood joys before the burden of the awareness of their transience creeps in, he does just this, and therein lies the images’ lasting power. Of course, Miller knows that all is not joy, far from it, and he handles scenes of despair and loneliness with as much dignity and respect as the delight he takes in the children. The lone, determined figure pushing a homemade wheelbarrow before a wall of silvered, storm-planed wood has the formal beauty of a Walker Evans portrait. Or note the solitary woman, the picture of weariness itself, if not complete despair, walking alone on an empty street with the active demolition of houses in the Summerhill or Washington-Rawson areas in the hazy distance. Some of his photographs of children, such as Untitled (Girl playing with her dolls, #1067) — a girl with her stiff, white dolls which stare unseeing into the distance — reflect an eye for the limitations and injustice of the world these children will enter.

Todd-Raque and Miller’s daughter Stepakoff, and undoubtedly others as well, hope to place the collection with an institution capable of documenting and preserving this part of Atlanta’s history. They also hope to raise funds through the sale of silver gelatin prints of Miller’s negatives to create a book on the photographer and his work. Todd-Raque says that she and Stepakoff have so many questions about the people and places Miller photographed, but for now they’ve honored him by sharing photographs that speak eloquently for themselves.

Rusty Miller: The Compassionate Eye in Forgotten Atlanta runs at Gallery 72 through August 10. A panel discussion Memory, Race, and Erasure in Urban Atlanta will be held in the gallery on July 6 at 7 p.m. Email info@SusanTodd-Raque.com for information about purchasing prints.