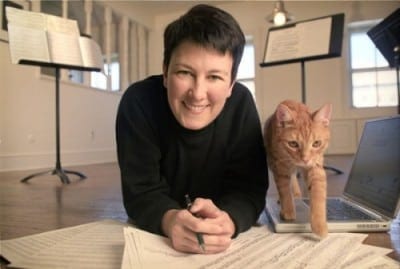 Preview: With fervor of true believers, Spano and ASO to offer Higdon and Gandolfi premieres

This week, the Atlanta Symphony Orchestra will perform world premieres by two composers who have become familiar names in Symphony Hall. Not so long ago, these two were kicked around by the critical establishment — considered artistic lightweights by some and outright dismissed in Europe. But the true-believer fervor and durable commitment shown by the orchestra and conductor Robert Spano is a heartening thing, and, as we’ve reported on many occasions, the ASO actually sells more tickets when contemporary music is on the program than for standard repertoire.

The latest work from Jennifer Higdon is “On a Wire,” which boasts a playfully birdy title and is a sort of concerto grosso for the new-music ensemble Eighth Blackbird and the orchestra. It’s the ASO’s second commission from Higdon, following “City Scape” in 2002. The ASO has also recorded several of her pieces and plans to record “On a Wire” this weekend, produced by Elaine Martone. (Photo of Higdon and cat in her Philadelphia studio by Candace DiCarlo.)

The other premiere is Michael Gandolfi’s “Q.E.D.: Engaging Richard Feynman,” the composer’s first-ever work for chorus and orchestra. It, too, is a second commission from the ASO, following “The Garden of Cosmic Speculation” in 2007, which was recorded.

As I wrote in a preview article, Higdon and Gandolfi are market leaders in what’s now firmly the norm in 21st-century American classical music. A generation ago, even a decade ago, composers who wrote music specifically to please an audience were labeled panderers, or trash, by fans of avant-garde modernism. The goal of serious art was to challenge and provoke. To them, the concept of a reputable composer writing “accessible” music was anathema.  (In lower photo, Gandolfi stands in front of Roger Kizik’s painting “The Confederacy of Dunces.”)

Higdon, 47, and Gandolfi, 53, reject that negativity: their music is tonal, usually hummable, often rhythmically alive. They’re not retro or neo-Romantic, but they are alert to popular styles from the 20th century, from Stravinsky and Copland to Hollywood and the Minimalists. Although they both teach at prestigious schools — Higdon at Philadelphia’s Curtis Institute of Music and Gandolfi at Boston’s New England Conservatory — neither writes for what is dismissively labeled “academically protected styles,” where professors compose music for one another, with a detachment from the ticket-buying public and an inevitable winnowing of ideas.

Instead, Higdon and Gandolfi write for the concert hall and regular symphony audiences. A key to success: their music is highly digestible on first listen. In sum, these composers are not experimenters but craftsmen, who work largely within the boundaries of what audiences already know and like about classical music.