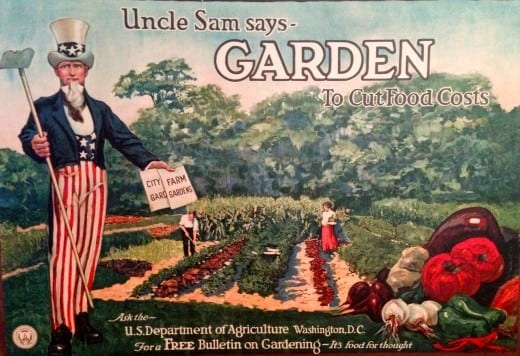 These are not hot-button topics anymore. But there was a time when all of these things had an impact on the average household, and the government played a crucial role by protecting the health and well-being of Americans through the enforcement of health and safety standards in the food industry.

Drawing from the National Archives and Records Administration, What’s Cooking, Uncle Sam? The Government’s Effect on the American Diet, currently at David J. Sencer CDC Museum through January 2, is a fascinating historical overview of the relationship between the government and the foods we eat that spans the Revolutionary War era to the late 1990s. It does not shy away from wrong-headed decisions or outdated but formerly influential concepts such as the “7 Basic Food Group Diet” introduced by the USDA in 1943. Its amusing promotional poster shows that butter and fortified margarine had their own food category but also advises “In addition to the Basic 7 . . . eat any other foods you want.”

The exhibition also discusses some of the processing problems encountered in the early manufacturing of common pantry items. Ketchup bottles, for example, were prone to explosion when tomatoes fermented. Initially benzoate of soda was added as a preservative to prevent fermentation, but Henry Heinz (yes, that one) came up with a processing method for ripe tomatoes without the need for benzoate, which can lead to serious health issues from long-term use.

The amount of material on display is too much to take in on one visit if you plan to view some of the educational movies such as Poor Mrs. Jones (1926). This 36-minute silent short, propaganda put out during a period of mass urban resettlement, is a cautionary tale designed to discourage farmers from pulling up stakes and moving to cities.

Among the highlights of this collection is vivid documentation of the infamous war between butter and margarine manufacturers that resulted in the Federal Margarine Act of 1886. Oleomargarine, as it was called then, had become more popular than butter due to its much lower price. Its success impacted the dairy industry, and profiteers began manufacturing a low-grade oleo that often contained dyes, dirt and other potentially harmful additives.

In an effort to protect the butter industry and consumers, Congress imposed steep fees and taxes on margarine manufacturers, which drove many of them out of business. Then there was the “Poison Squad.” These civil servants, who volunteered to be guinea pigs in government food tests, put their health at risk by agreeing to eat increasing amounts of commonly used food additives in their meals and track the impact it had on their bodies. Each experiment would be halted if the participants began to become ill. Luckily, no one died from the testing.

Also on view, an impassioned letter from author Sinclair Lewis to President Theodore Roosevelt about the deplorable conditions in Chicago’s meatpacking industry. Although Roosevelt considered Lewis a “crackpot” and “hysterical, unbalanced and untruthful,” public outrage and the success of Lewis’ 1906 muckraking novel, The Jungle, eventually prompted Roosevelt’s administration to pass the Meat Inspection Act and the Pure Food and Drug Act of 1906.

Educational in the best sense but also highly entertaining, the show combines pop culture nuggets, historical curiosities and official government records to demonstrate just how far we have come in our understanding of healthy eating and nutrition in today’s world and how the pioneering efforts of government agencies resulted in the safety precautions and industry standards for food manufacturing that we take for granted.

Note: If you drive, you will have to go through a guard station for security clearance. The parking deck often fills up early and there are no additional spaces for vehicles, so be prepared to park offsite and walk to the facility. There is a second security clearance at the entrance. Trust me, this show is worth the extra hassle.