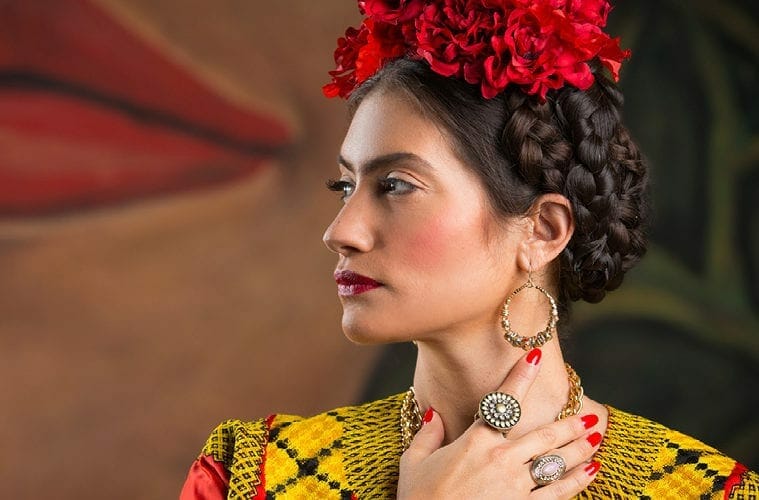 Catalina Cuervo, who performed in The Atlanta Opera's initial production of "Maria de Buenos Aires," returns in October to star in "Frida."

What’s ahead for The Atlanta Opera, Spivey Hall and universities for 2019–20

Atlanta is a vibrant place for classical music, and the 2019–20 season is no exception.

Last week, we spotlighted the upcoming 75th-anniversary season for the Atlanta Symphony Orchestra. But the ASO is far from the only game in town.

There are a variety of events of exceptional interest for fans of classical music throughout the Atlanta metro area — including homegrown opera star Jamie Barton at Spivey Hall.

Today, we look at The Atlanta Opera, Spivey Hall and offerings by area universities. On Monday, we’ll showcase what’s coming up this season for local ensembles and Atlanta’s “new music” scene.

At the posh Cobb Energy Performing Arts Centre and other metro venues, you can hear a mix of traditional and more innovative operas, with the balance this season toward innovation. (Only Madama Butterfly cracks the top 10 for most performed operas this year, at number six according to Operabase.)

— On October 5–13, Frida, composed by Robert Xavier Rodriguez, tells the tumultuous life of the artist Frida Kahlo and her marriage to the Mexican muralist Diego Rivera. Rodriguez has written eight operas, some for children. Frida (1991) combines mariachi instrumentation (accordion, violin, guitar and trumpet) and “folk” influences such as ragtime and 1930s jazz with Rodriguez’s own late romantic, but highly dissonant style. Watch for the fiery Colombian soprano Catalina Cuervo as Frida.

— Rossini’s La Cenerentola (1817) is a variant on the Cinderella story in which the evil stepmother is replaced by a stepfather, Don Magnifico. This “drama with jokes” contains some of Rossini’s finest solo writing and runs November 2–10.

— Salome (1905) is a one-act opera on scandalous and murderous themes in which Richard Strauss pushed the language of tonality to the limit. This production, January 25–February 2, will have two noteworthy singers: Jennifer Larmore (Herodias), an American mezzo-soprano who is a native of Atlanta and is known for her coloratura and bel canto roles, and Jennifer Holloway (Salome), another American mezzo, who comes off a recent success in 2019 at the Oper Frankfurt. — On March 7–15, Porgy and Bess is George and Ira Gershwin’s 1935 folktale of a disabled black beggar in Charleston and his attempts to rescue Bess from often violent and exploitive men. The American bass and former all-American college football player Morris Robinson, an Atlanta favorite, will play Porgy March 7, 8 and 10. Kristin Lewis, a lirico-spinto soprano known for singing Verdi, will be Bess.

— On May 2–10, Madama Butterfly (1904), by Puccini, tells the tragic story of a geisha wife in Japan, Cio-Cio-San, who is married to a U.S. Naval officer. Cio-Cio-San will be played by Japanese soprano Yasko Sato, whose performance with the Seattle Opera was praised for her musicality, subtle Japanese posturing and portrayal of the character’s stubbornness.

— Glory Denied, by Tom Cipullo (2007), May 21–24, tells the story of the United States’ longest-held prisoner of war and his rocky transition back to civilian life. The protagonist, Colonel Jim Thompson, will be played by baritone Michael Mayes, an American opera specialist who is known for deeply embodying roles in works such as the Atlanta Opera’s Dead Man Walking, performed this past spring. (For its commitment to the veterans’ community, especially for making its productions free of charge to veterans, the Atlanta Opera was honored in 2019 with an ArtsATL Luminary Award.)

In its 29th season, Spivey Hall (on the Clayton State University campus) features a full lineup of the finest international performers on weekends, especially on Sunday afternoons. This venue is especially convenient for listeners on the south side of Atlanta.

Spivey Hall always has stellar programming, particularly vocal artists, and the 2019–20 season is no exception.

— Strings series. On September 29, the Dover and Escher String Quartets come together for a joint concert. Both ensembles are American, the first having received the Cleveland Quartet Award in 2015, and the second being closely affiliated with the Chamber Music Society of Lincoln Center. Although on the pricey side ($75 per ticket as a season-opening gala), this concert gives one a rare chance to hear Mendelssohn’s famous Octet by two up-and-coming quartets.

On October 19, German violinist Christian Tetzlaff will collaborate with pianist Lars Vogt on a program that ranges from Brahms to Ravel. Tetzlaff came to fame in 1988 with a performance of Schoenberg’s Violin Concerto, a fiendishly difficult work, with the Cleveland Orchestra. The duo received Gramophone’s prestigious “Recording of the Month” in January 2014 for their rendition of Schumann’s violin sonatas.

The Horszowski Piano Trio, November 3, is a group in high demand inspired by the life of the legendary pianist Mieczysław Horszowski (1892–1993), who taught at the Curtis Institute. The trio focuses on contemporary composers and composers that Horszowski met in person, such as Ravel and Fauré. And lastly, the Takács Quartet will perform March 1. This group is going on 40-plus years of performing experience (allowing for changes in personnel) and has a large discography of critically acclaimed recordings, including the Beethoven, Smetana, Borodin and Bartók quartets.

— Piano series. The Bax and Chung Piano Duo (husband and wife) will present an intriguing program of orchestral works arranged for two pianos on October 6.

On October 27, the German pianist (and sometime conductor) Christian Zacharias will show his lyricism and musicianship in a program of Beethoven, Schumann and Schubert.

The renowned Bach interpreter Angela Hewitt will give an all-Bach program March 8. Hewitt’s interpretations should be ranked up with other all-time greats such as Sviatoslav Richter, Glenn Gould and András Schiff.

On April 4, the up-and-coming British pianist Benjamin Grosvenor, the youngest artist to win a Decca recording contract, will present a mixture of lesser-known 18th-century and romantic-era works.

Ukrainian pianist Alexander Romanovsky, on April 25, will feature in a program ranging from an arrangement of the Bach Chaconne from violin to piano to Chopin Nocturnes and Études. Romanovsky was the 2001 first-prize winner of the Busoni Competition. He is known as a highly lyrical virtuoso and interpreter of Rachmaninoff.

— Organ series. Paul Jacobs, a faculty member at Juilliard and the only organist to win a Grammy, performs February 15. Jacobs is famous for an 18-hour nonstop concert of all of Bach’s organ works in 2000 on the 250th anniversary of the composer’s death.

Alan Morrison, who holds the McGehee Family Organist Residency at Spivey Hall and is a champion of new music, will present a March 13 program to be announced later.

— Vocal series. German lyric tenor Christoph Prégardien, well known as a specialist in Lieder, oratorios and Baroque music, presents a program on October 20 in collaboration with the pianist Julius Drake. The program will include Lieder by Schubert and Beethoven.

On December 8, Rome native and mezzo-soprano Jamie Barton appears in a program that features music ranging from Haydn to Richard Strauss. Barton has been in high demand by the Met and other opera houses around the world since winning competitions in 2013; her voice has been compared to that of the Norwegian Wagnerian soprano Kirsten Flagstad.

On January 11, the British baritone and composer Roderick Williams, and one-time choral scholar at Magdalen College in Oxford, appears in a program containing Brahms’s well-known song cycle, Die Schöne Magelone, which portrays a quasi-medieval romance. Julius Drake again is the collaborator on piano.

— Special events. The Chamber Music Society of Lincoln Center, directed by cellist David Finckel and pianist Wu Han, presents a program February 23. Composers range from classical (Mozart) to the 20th century (Barber). Besides featuring the pianist-composer Michael Brown, four wind players and one hornist will be heard, a mix that listeners should find refreshing.

On February 29, guitarist Miloš Karadaglić, from Montenegro, plays a program combining classical works with crossover repertoire by the Beatles and arranged for guitar and string quintet. Karadaglić — often called “Miloš” — has released highly successful recordings, such as his Blackbird: The Beatles Album (2016, Mercury Classics).

— At Emory, jazz and classical pianist-composer Brad Mehldau will collaborate October 18 with British tenor Ian Bostridge. Mehldau has written a song cycle for Bostridge, and it should be fascinating to see the points of contact — and differences — between these two distinctive musicians. American mezzo-soprano Joyce DiDonato will sing a program November 3 meditating on themes of war and peace. On January 15, the innovative Royal Philharmonic Orchestra will team up with Khatia Buniatishvili, a French-Georgian pianist known for interpretations of Chopin and Liszt. (The conductor will be Mark Wigglesworth, who will also guest conduct the Atlanta Symphony Orchestra on May 7 and 9.

We will get a fun treat and see Robert Spano away from his regular job with the ASO April 10: he will collaborate on piano with the violinist Robert McDuffie in a program including music by Beethoven and Brahms. McDuffie is a native of Macon and is an articulate spokesperson for classical music, confirmed by his many media appearances, for instance on CBS News Sunday Morning.

— Georgia State University’s Rialto Center for the Performing Arts will feature a February 4 program performed by the GSU Choral and Wind Ensembles conducted by Eric Whitacre. An American composer and conductor, Whitacre is known for his choral, orchestral and wind ensemble music. His works, which have been performed by some of the world’s most prestigious orchestras and choirs, are known for their indeterminate sections and for a neo-impressionistic approach.

— On November 15, the Georgia Tech Symphony Orchestra, directed by Dr. Chaowen Ting, will accompany four silent films — one each by Charlie Chaplin, Buster Keaton, Harold Lloyd and Dean Renoir — in a concert at the Ferst Center for the Arts entitled “Changing Score: Classic Films Reimagined.” The event explores the interplay of music and technology in the rise of the film industry in the early 20th century. Original film music will be provided by the French composer Gaëll Lozac’h, who has written for a wide variety of ensembles and instruments, sometimes unusual ones such as the harpsichord. (Lozac’h is also active as a harpsichordist, organist, and music teacher.)

On April 17 and 18, Scrap Arts Music, a percussion ensemble from Vancouver Island that also performs choreographed action and acrobatics, presents a program entitled “Children of Metropolis.” Inspired by Fritz Lang’s 1927 film Metropolis, this show is all acoustic on instruments recycled from metal scraps, demonstrating (through music) the benefits of recycling.

Cellist Zuill Bailey, a Grammy-award winner, performs Brahms’ Double Concerto with professor and violinist Helen Kim on October 9. On April 17, the ASO and Midori, the latter one of the world’s most eminent violinists and a notable humanitarian, perform together in Bartók’s Second Violin Concerto.