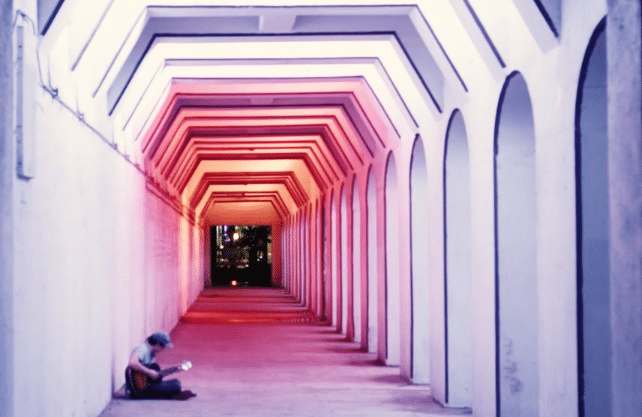 Rock ‘n’ roll has always been Tedo Stone’s vocation. According to Stone, he grew up “in a family with a musical father and where brothers handed down bass guitars to younger siblings like old sweatshirts.” By the time he was 12 years old, Stone could be found fronting musical acts in his hometown of Covington, Georgia.

Stone now calls Atlanta home. To promote his latest album Marshes, which was released by This Is American Music in the autumn of last year, he along with another local music act, Oak House, embarked on an ambitious tour to New York and back. After an especially trying show at The Nick in Birmingham, Alabama, Atlanta videographer Ethan Payne and Stone stumbled upon the city’s 18th Street underpass, bedecked with ever-changing LED lights. The resulting live performance of Stone’s song Slugs, captures Stone’s signature combination of Southern melancholy and raw rock ‘n’ roll. (One can also argue it encapsulates the grit and grind of a musician’s life on the road.)

Stone will be performing with tour mates Oakhouse as well as Sydney Eloise & The Palms this Saturday at the Earl.