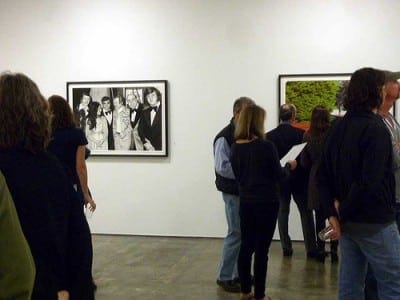 The art world is an interdependent system of artists, collectors, galleries, museums, government and the press. Like the engine in your car, when one piston goes out, the whole thing sputters.

Galleries, for instance, are an essential link between artists and their market. Fulcrums for artists, they have their own hierarchy, from those that serve as the entry point for inexperienced artists to those that actively shape an artist’s career, cultivating collectors and curators, putting out catalogs and finding exhibition opportunities in galleries elsewhere or in arts centers and museums

Galleries perform a civic as well as a commercial function. Free and open to all, they play their part in ensuring that art of all kinds by artists at different stages of their careers is a presence in the community. They are a place to enjoy and learn about all kinds of art.

Therefore, when Nancy Solomon and Marilyn Kiang, two longtime Atlanta dealers who have set a standard for showing challenging, relevant work and who represent some of Atlanta’s important artists, announce their intention to close their galleries, attention must be paid.

The closings will diminish the ranks of senior dealers here. Because a dealer’s reputation and credibility are major factors in promoting an artist’s works and in bringing high-caliber artists to Atlanta, it’s a loss that affects us all — artists who want their help and audiences that benefit from their exhibitions.

“I know and respect both of those women’s eyes,” says Rebecca Dimling Cochran, curator of the Wieland Collection at the WareHOUSE  and a regular contributor to this site. “When they suggest that I look at an artist, I always know that the work will be of high quality. They are articulate in describing the content and construction of the work, and their passion for their artists is palpable. I will really miss learning from their exhibition programs.”

Although both dealers are planning Atlanta projects, they’ve decided they don’t need or want a permanent space with its attendant overhead and responsibilities.

“Times change,” says Solomon, who will close Solomon Projects when its current exhibition, “Mike Wsol: Limited Vision,” ends its run Friday, November 26 (Solomon with Wsol’s sculptures is at left). “I’ve been in this space for 18 years. I’m ready to move on to work on new ideas that have been percolating the last few years and explore life outside of the white box,” she says.

Solomon recently accepted the position of artistic curator for the three-year-old Westobou Festival in Augusta, for which she will curate arts and film projects and work on marketing strategies for festival sponsorship. Among other plans, Solomon also will publish “Small Problems in Living” (Charta), a coffee-table book of Atlanta artist Sarah Hobbs’ photographs, in March 2012.

Kiang will close her eponymous gallery when her lease expires at the end of March 2012. She will end a 20-year run with a solo exhibition of Atlanta artist Ben Steele, followed by a group show of contemporary Chinese photography — a fitting finale for the dealer who uniquely brought Chinese contemporary art to Atlanta before it hit mainstream consciousness.

Kiang says the stress of living part time in China, where her husband teaches, is a factor in her decision, as is the international character of her clientele. “The Internet is a game-changer,” she explains.

Both, however, cited the difficulty of working in Atlanta as a tipping point. They have simply run out of patience with the art scene here.

“I’ve had fantastic support from a few people, but Atlanta is very provincial,” says Kiang (at right, standing in front of a painting by Zhang Dali). She describes the local art community as risk-averse, conservative and too accepting of mediocrity. She is not alone in feeling that Atlanta is generally indifferent to art.

“I see hope in the next generation, but I’m not willing to wait,” Kiang says. “It’s time to pass the torch to someone else to fight the Battle of Atlanta.”

Solomon is more pessimistic. “I don’t know if commercial galleries have a role to play in second-tier cities like Atlanta,” she says. “[The late] Louisa McIntosh, my mentor, warned me 18 years ago. I thought it would change. But it hasn’t.”

The system, Solomon says, is stacked against galleries in cities that are not the art centers. New York’s nexus of artists, powerful dealers, major museums and general excitement lures collectors and museums to make their acquisitions there, even when home-town galleries carry the same artists.

A case in point: Alan Avery was fit to be tied when the High Museum inaugurated its Print Fair in May by inviting dealers from all over the country, but not its home town. Prints by the contemporary names the High touted were stored in Avery’s own flat files up the street. He took his complaint to High Museum Director Michael Shapiro. “I told him that the museum was perpetuating the idea that New York is the only place for good artwork,” Avery says.

Also endemic to second-tier cities is automatic doubt about the quality of local artists. The gallerists say that Atlanta buyers support young artists but require a New York imprimatur when considering mature ones whose work commands higher prices.

“There’s nothing wrong with being a second-tier city; second tier is damn good,” Kiang says. “There are so many good artists here who should be supported. We have a lot of second-tier artists but not enough second-tier collectors.”

It’s no wonder, then, that aspiring artists want representation by New York galleries. Just as understandable is the frustration of local dealers who do the hard groundwork and then don’t get credit or a financial reward when artists reach a certain point in their careers. There’s little incentive to keep a physical space, Kiang says, when exhibitions are poorly attended and her Internet clients are so eager.

Galleries everywhere also face a challenge in the growing primacy of “event culture.” The ubiquitous art fairs are a double-edged sword. On one hand, participating galleries can expand their audience (though success there is hardly assured). On the other, collectors wait to purchase at the fairs, which offer not only one-stop shopping from an array of galleries but also the frisson of mixing with celebrities, artists and other collectors.

Clearly, buying art is as much about the experience as what one takes home. That’s why the uptick in other kinds of temporary events concerns dealers, who fear that the appeal of communal experience and spectacle suck up attention and press (they have a point there) and overshadow the day-in, day-out presence of gallery or museum exhibits.

Of course, a bad economy exacerbates all of these problems.

Stuart Horodner, artistic director of the Atlanta Contemporary Art Center and a former gallerist, can commiserate. “Running a gallery is exhausting financially and psychologically,” he says.

And a contemporary gallery more so: “Contemporary art is an acquired taste. It’s as much about not knowing as knowing. You have to create the interest and feed it consistently. That’s why gallery exhibitions are incredibly important to the health of the scene.”

Collectors should play a more active role in Atlanta’s art ecology by patronizing galleries and learning about their community’s artists. But the “Battle of Atlanta” is everybody’s battle. “We all need to do a much better job of explaining the excellence we do, in engaging people and showing them the possibilities,” says Horodner, who nevertheless maintains that he is more optimistic about the art community now than ever before. “Everybody needs to up their game.”

That goes for museums, artists and the galleries themselves, which at times are limited by passivity and lack of imagination in finding ways to engage collectors and build new audiences. A dramatic example of outside-the-white-cube thinking is Jennifer Schwartz’s “Crusade for Collecting” (at left), a cross-country tour in which she’ll sell photographs by the emerging artists she represents out of a van. For the online generation, the young Atlanta gallery owner has “The Ten,” a website offering a curated selection of 10 signed, limited-edition prints on the 10th of each month for $250 apiece.

“We’re shooting ourselves in the foot if we don’t make art fun, exciting and accessible,” Schwartz says.

Let’s face it. Our city is never going to be New York.  New developments such as the growing popularity of online buying and communal artistic experiences might seem to render the white cube an economic folly. Indeed, one might argue that the Battle of Atlanta is more like the Hundred Years’ War.

But despite it all, Atlantans continue to join the fray, even if — like James McConnell and Mark Basehore of Beep Beep Gallery and MINT founder Erica Jamison — they have to hold down full-time jobs to do so. Dealers grouse and worry, but they love their artists, their galleries and the physical experience with art that occurs within them.

As Kiang says, “It takes balls, passion and insanity to do this.” Fortunately for Atlanta’s art ecology, those traits appear to be renewable resources.