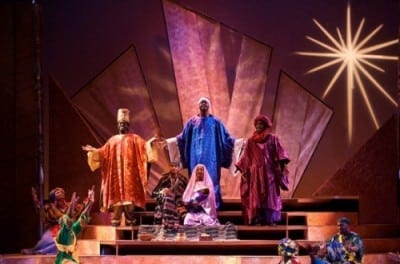 JMichael and Patdro Harris go way back — not just with each other, but with Langston Hughes’ “Black Nativity,” the gospel-inspired retelling of the birth of Jesus that has become a holiday tradition at Kenny Leon’s True Colors Theatre.

The musical opens tonight at the Southwest Arts Center and will run through Dec. 30, reuniting musical director and arranger JMichael and stage director and choreographer Harris. The pair have collaborated on the musical since its start with True Colors seven years ago, and Harris even performed as Joseph back in the 1980s. It’s also a work of changing, and enduring, quality: last year’s production earned five Suzi Bass nominations, winning for Best Ensemble, Harris’ choreography and Shilla Benning’s costume design. 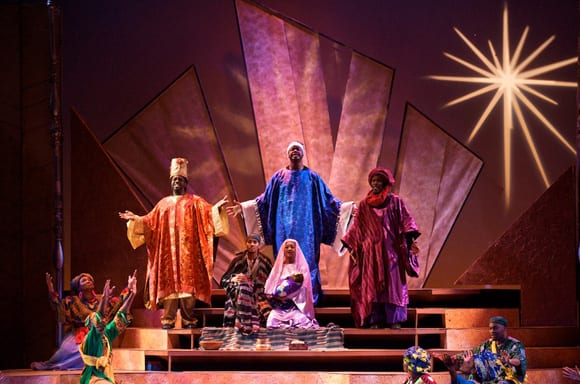 “It’s the longest relationship I’ve had with a theater piece,” said Harris. “I love the message, and I love how people come to see it when it comes out. And I love how it inspires people.”

But it’s the relationship between Alabama natives Harris and JMichael that’s at the heart of this production. They formed their relationship in the early 1990s when they worked together with Jomandi Productions on such musicals as “Slam” and “The Wiz.” From there they collaborated on other works, including “Rejoice” at the Alliance for True Colors. For a few years “The Wiz” served as an annual holiday musical for True Colors before artistic director Kenny Leon approached them about doing a show that made better use of the city’s musical youth, and so they settled on “Black Nativity.” “The ironic thing,” JMichael recalls, “is that I had been in Atlanta for years but had never seen it!”

It didn’t hurt that Harris was more than familiar with the production, which is a study in brilliant colors, costumes and staging, a large chorus, and such gospel standards as “Go Tell It on the Mountain.” JMichael knew he could rely on Harris to help make it move.

“He’s an incredible person,” said JMichael, who just finished as musical director for True Colors’ “Gut Bucket Blues” (reviewed here). “He’s an incredible director who has a wonderful vision. We both come from the musical world. Dance and music are joined at the hip, so it’s easy for us to communicate. ‘Black Nativity’ is more about music and dance than it is dialogue.”

Harris knows that the pacing of the music in the production is just as important as the choreography, and works to make sure the two are in sync. “We use the music to either push the scene along or to hold the moment, love on the moment,” Harris said.

“JMichael’s music always makes sense in the scene. He’s such a smart man, and I’ve learned to listen to him. Our relationship tells you what you need to do for a given moment. I’ll say, ‘You don’t like that tempo? I can tell from your body language.’ And he knows it’s not a personal attack on him.” Together they’re working to breathe new life into “Black Nativity” while ensuring that it retains the tradition.

Harris says they’re tweaking the opening of the first act, making the audience more involved to grab their attention right away by getting them to dance along in the aisles. “We dance by them,” Harris notes, “but not with them. I wanted to get them into the party so they’re not just a spectator but also a participant.”

The last thing they want to do is let the show go stale. “Every time you do a repeat production, you always want to make it better than last year,” JMichael says. “Sometimes last year we took some songs out and put some other pieces in. Last year I had some incredible lead singers who were great soloists, so we found places for them to be heard and for them to be featured.”