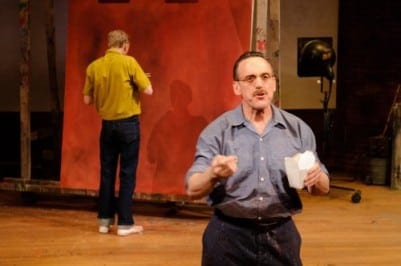 The new play “Red,” onstage at Theatrical Outfit through March 11, opens with painter Mark Rothko (Tom Key) asking his new assistant (Jimi Kocina), “What do you see?” Like the play itself, the seemingly simple question is fraught with the complexities and uncertainties that Rothko himself faced in the late stage of his career. Playwright John Logan depicts him at an uneasy, anxious time.

As the play opens, Rothko is working on his now infamous commission for a series of paintings for the new Four Seasons restaurant in Manhattan, a project that seemingly became a source of anxiety and depression for the real-life artist. Rothko’s motivations for refusing to hand over the paintings, and his suicide years later, are among the great mysteries of 20th-century art.

Veteran Atlanta actor Key dives into the role head first. Key’s Rothko takes himself and his work with deadly seriousness. At the same time, he can mock, even torture, himself for it: he builds the monument as he lightly defaces it. Key is especially good in moments that convey Rothko’s self-knowledge about his idiosyncrasies. “I don’t work well in nature; the light’s no good,” Key deadpans when asked whether he ever works en plein air. The way Key noisily inhales a cigarette or anxiously pours a glass of (what else?) Johnny Walker Red tells us as much about the character as any line of dialogue.

Kocina, as Ken, brings out the assistant’s puppy-dog innocence but also clearly conveys the character’s journey from hero-worshipping idolator to rebellious challenger. He’s eager to absorb Rothko’s knowledge, but once absorbed he wants to reject it.

The advent of Pop Art, which ended the reign of the Abstract Expressionists, is well known but is seldom played out as human drama. It’s clear that Key’s Rothko sees it as a sort of twilight of the gods, and we get a rare understanding that such movements can carry a human cost.

What comes across in Key’s performance is Rothko’s sudden powerlessness, his impotent rage and his unswerving dedication to his art, even if it leads him to a place of ruin. He thinks of the young guns as barbarians at the gates, and Key is so good that we believe him even while we can also see the foolishness of his constructs. His anger at art collectors, at the bourgeoisie, at intellectuals, at young artists all seem perfectly justified. But in Key’s telling, it’s clearly a doomed and poisonous path.

The play is powerful in its narrow focus on two characters, but perhaps a third character would have drawn the conflict out of cerebral headspace and into the dramatic sphere of ideas played out as theater. I felt that an actual visit from Philip Johnson, architect of the Four Seasons — even if it strained credulity or historical accuracy — as a representative of the corporate forces Rothko despised would have brought the conflict alive. Instead, we get a brief phone call in which we hear only Rothko’s side of the conversation as he announces to Johnson that he won’t complete the commission. We get the briefest report of Johnson’s reaction.

The talk stays a bit too lofty, philosophical and arty throughout. At one point Ken complains, justifiably, that Rothko seems uninterested in Ken’s personal life. They’ve worked together for two years, and Ken complains that Rothko has never asked where he lives, whether he’s married and so on.

But that’s actually a two-way street: we never hear much about Rothko’s personal life either, and he never mentions his (very real) marriage and family in the play, which is odd, because the few personal revelations that there are produce some of the play’s strongest moments. Key makes a description of Rothko’s early life growing up in an atmosphere of fear and violence as a Jew in czarist Russia fascinating, but it’s all too brief. The tantrums and the art talk often veer too close to artist bio-drama cliche.

“Red” is a two-man play, but this production actually has a third star in Lee Maples’ stunning set. Detailed and thoughtful but never busy or overwrought, his design for the studio tells us as much about Rothko as the spoken words themselves, from the stored stacks of paintings and spilled paint to the windows covered to block out natural light and the cabinet-sized record console full of Mozart LPs. I especially loved the wooden cover of the phonograph itself, tellingly smudged with paint and fingerprints.

All in all, “Red” offers a thoughtful and fascinating portrait of a giant of 20th-century art facing a confusing, diminishing and uncertain time. Those who like cerebral theater will feel right at home, while those who prefer more blood-and-bone drama on the boards may find the play a bit wanting. In order for “Red” to work for you, you have to believe that finding the correct proportion of red to black when mixing paint can be a matter of urgency and drama. If you can’t go there, all is lost for you here. The show won’t suit every taste, but it’s the sort of splendidly acted cerebral drama that we get all too rarely in Atlanta.