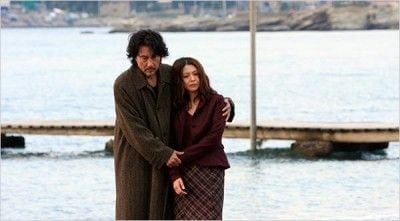 Steve MurrayJuly 10, 2009
Film+TV
Best known in the States for his paranormal-inflected studies of urban alienation, “Cure” and “Pulse” (the original, not the lousy American remake), writer-director Kiyoshi Kurosawa turns his eerily tranquil style on the drama of a family in crisis with “Tokyo Sonata.”
Trouble begins when 40-something corporate drone Ryuhei Sasaki (Teruyuki Kagawa, left) gets downsize — and decides not to tell his family he’s lost his job. (The setup recalls French director Laurent Cantet’s wonderful “Time Out.”) Pretending nothing’s wrong, Sasaki follows the river of suited workers downtown every morning … but idles away his hours in city parks once the others enter their offices. He’s often joined by old friend Kurosu (Kanji Tsuda), another pink-slip victim who fools his own family by programming his cell phone to busily ring five times an hour.
Meanwhile, Sasaki’s oldest teenage son Takashi (Yu Koyanagi) is coming home at irregular hours, while younger son Kenji (Inowaki Kai) practices an unusual rebellion. He’s secretly funneling his lunch money into private piano lessons, a pursuit his father has proclaimed to be frivolous. The family’s lynchpin — or is she an enabler? — is wife and mother Megumi (the wondrously focused Kyoko Koizumi). Though she starts suspecting something is amiss with her men, tranquility and order are her goals. As she tells her eldest son, “Playing mother isn’t all bad, you know.” Well, sure — at least until it is.
Largely shot in medium and long shots, “Tokyo Sonata” depicts lives of quiet (and achingly polite) desperation with a clinical detachment. At first. But like the musical composition of its title, the movie passes through multiple movements and tones. The characters’ stoic response to bad events can border on deadpan humor. Then, though, director Kurosawa switches gears — especially in a couple of scenes of violence between fathers and sons that, in context, are scarier than anything in his supernatural films.
In its final passage “Tokyo Sonata” starts to recall another film, Pedro Almodovar’s “What Have I Done to Deserve This?,” starring Carmen Maura as a working-class housewife crushed by an avalanche of comic indignities. “Sonata” veers in that direction during a dark-night-of-the-soul for Sasaki, Kenji, and especially Megumi — snapped out of domestic sedation by the intrusion of a desperate thief (Kurosawa regular Koji Takusho).
Here the movie starts to feel a little belabored, grasping for a weight that, frankly, its lighter moments had already achieved. But Kurosawa sets things to rights again, ending “Tokyo Sonata” with a gracious musical coda that underscores what the director has been doing throughout, masterfully mixing and flexing tones — an impresario himself.
“Tokyo Sonata.” Directed by Kiyoshi Kurosawa. With Teruyuki Kagawa, Kyoko Koizumi, Inowaki Kai. In Japanese, with subtitles. 2 hours. Rated PG-13. At Landmark Midtown Art Cinema.