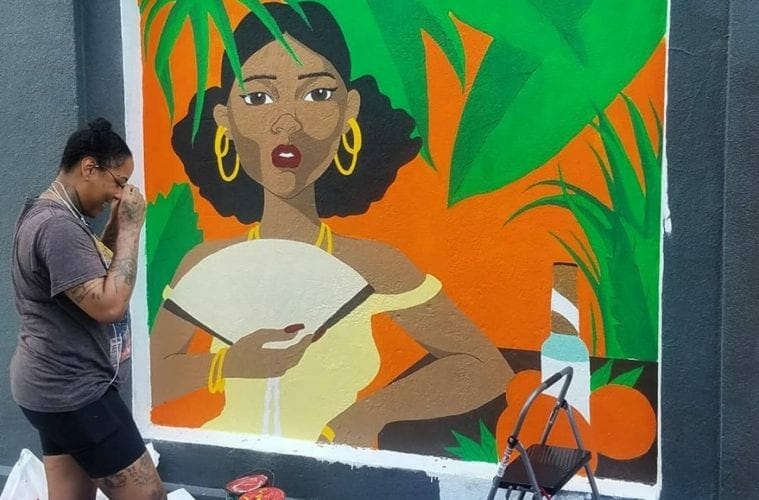 Zipporah Joe’l Peay is a 29-year-old painter and muralist. Like most Atlantans, she’s a transplant, coming from Rembert, South Carolina (population: 400-ish), where her mother kept her busy with crafting and creating. “I like to paint figurative pieces, women and specifically brown women because I didn’t see myself represented in street art a lot,” Zipporah Joe’l says.

In 2015, political tension shook the quiet Southern town when South Carolina voted to remove the Confederate flag from the state Capitol, ending its 54-year presence. A black activist demanded the attention of social media and the nation with his sweatshirt — the design, titled Fuck the Flag, features a black middle finger in the center of a Confederate flag. Malik Stroman conceptualized the design and asked Peay to create it. “I painted a one-off for him, and he ended up being photographed a ton at the protests and really gained popularity,” says Peay, who uses the name Zipporah Joe’l professionally.

She realized she wanted more depth in her artwork. Visiting Atlanta later that year, she spontaneously decided to put down roots. She painted her first large-scale mural in 2018 as part of the Forward Warrior Project, an annual mural-painting event in Cabbagetown. Her work also can be seen at West End’s Mural Bike Racks and, more recently, the Stacks Squares Mural Project, also in Cabbagetown.

Peay’s website — which will include information on commissioning her — is scheduled to go live at the end of August.

“I like to paint figurative pieces, women and specifically brown women because I didn’t see myself represented in street art a lot,” Peay says. “I’ve been incorporating a lot of nature in my work because nature is beautiful. It’s refined, but in other aspects it’s dangerous and will do whatever it wants to.” Peay plans to incorporate more architecture in her figurative pieces going forward, giving a nod to her past and present.

Peay’s latest mural is one of the 10 seven-by-seven-foot Stacks Squares (at Wylie and Carroll streets). The project began in 2017 and features a rotating mural gallery on the back entrance of the Cotton Factory Lofts. The murals rotate every four months. The current rotation, including Peay’s mural, will stay up through at least November. The other artists are Monica Alexander, Adela Pons Atencio, Livia Bolster, Lela Brunet, Fabiana Lara, Kaye Patton, Shanisia Person, Brooke Robinson and Kayleen Scott.

Some artists have been painting these murals for years, so new muralists can meet them and learn, says Stacks curator Austin Blue. “The four-month rotation time gets people accustomed to things changing — people get attached to things — but it gives more opportunity for additional muralists to get on.”

The Stacks project is now in its fifth rotation, which features walls exclusively by female artists, Blue says, for two reasons: the controversial Georgia anti-abortion law and the large number of talented women applying to paint. “Women’s rights were being infringed on, and it felt right,” he says. Peay’s untitled mural shows a woman with green, lush foliage over a seductive, hot orange backdrop. A single drop of sweat runs down her left cheek, putting Georgia’s heat wave on full display. A bottle of Florida citrus water sits in the right corner, which to Peay signifies prosperity.

“There are a lot of changes going on with gentrification,” she says, “but I feel like Atlanta is very good about keeping its footing, especially in Cabbagetown. I wanted something that was fun and bridges the gap. I don’t know if other people are going to get that, but that’s what the piece means to me.”

Peay, a self-taught artist, didn’t finish high school. “I knew I’d have to start getting serious about my art if I was going to make it,” she says, adding that social media has allowed her to promote her work on a level that wasn’t possible before. The Stacks Squares Mural Project reignited Peay’s interest in art. She’s in the midst of a social-media cleanse and is reevaluating who she is as an artist. “I’d reached a point where I was doing things to sell things — this is my prime source of income — and I was starting to feel a disconnect in what I was creating. I think I’ve started to find my specific style more and doing pieces where people can see them and know that they were done by me.”