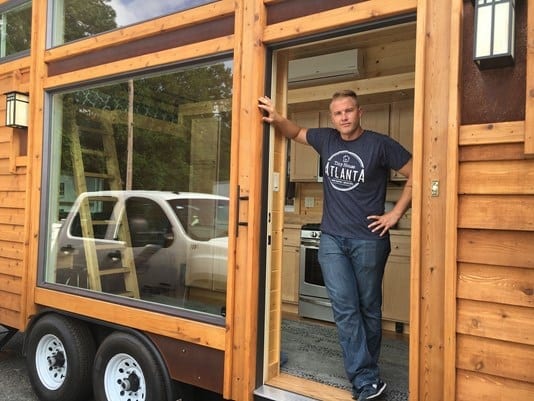 When a caravan of 25 bite-sized homes rolls into Decatur for its annual Tiny House Festival on September 29, the cuteness factor will be off the charts. But Will Johnston, founder and executive director of Tiny House Atlanta, hopes the collection of micro homes will inspire macro thinking about our cookie-cutter approach to living.

“There’s a lot more to this movement than square footage,” says Johnston. “I hope visitors will leave asking themselves, ‘What would society be like if we could afford our housing? What would we give back [if disproportionate amounts of time, energy and resources were not squandered on maintaining our homes]? Who would we be?’” Finding ways to connect people and strengthen communities comes naturally to Johnston. Growing up in rural West Virginia, he was part of a very large and close-knit extended family where shared dinners, group activities and a sense of camaraderie were the norm. In his world, neighbors asking to borrow a cup of sugar was the rule, not an anachronism. And unexpected knocks on the door were greeted with excitement and curiosity, as opposed to hostility and resentment.

Johnston took those homegrown values for granted until about four years ago when he started feeling edgy and uncomfortable in the new world he’d constructed for himself. As manager of Community and Customer Engagement for the Atlanta Journal-Constitution, he loved his job and colleagues. But making money for the sake of making money, not feeling like he was part of something bigger and knowing that he was not making a difference left him longing for more — and less.

In December of 2013, he took a leap of faith, sold three-quarters of his possessions, including a brand new car and moved to New Zealand to relearn how to live in the moment. The journey wound up reminding Johnston of a truth he was born knowing — that happiness is derived from experiences and people, not things.

“We are such a consumerist society that we think we need to show our wealth by bling, or a new car, or a bigger house,” says Johnston. “But when I returned to Atlanta [after spending three months abroad] and didn’t have anything pushing me to make more money, be more and do more, I thought, Wow! This is really niiiiiiice!!!”

The revelation made the accidental minimalist wonder who else had rid themselves of the pressure to make more, be more and do more for the sake of keeping up with the Joneses.

“I knew the movement [toward sustainability and imposing smaller footprints on the planet] existed, but I was curious about who wanted to do it in Atlanta,” says Johnston. “So I organized the first Tiny House Atlanta Meetup, [monthly meetings to promote education on, and advocacy for, smaller living], on July 14, 2014 at the bottom of the Wrecking Bar Brewpub.” Eleven people showed up for the inaugural gathering. Three years later, Johnston has grown his Meetup group to 1,900 people. Serenbe’s Steve Nygren is the keynote speaker of this year’s festival.

“While Tiny House has caught the imagination of everyone, it’s simply downsizing for a simpler, more authentic life,” says Steve Nygren, cofounder of Serenbe and keynote speaker for the 2017 festival. “We’re at a period in time where less is more, we find we don’t need big places to live in, and we don’t think about existing [solely] in four walls. Instead, we are looking for ways to connect with a larger life — whether within our local community or in nature.”

Johnston acknowledges that not everyone can live in a smaller space. But he would like to make the choice to do so a normalized option in a culture where more is more and the size of a person’s home tends to be predicated on their income.

“Even if I can afford 5,000 square feet, maybe I don’t want the aggravation of maintenance and upkeep of a huge home,” says Johnston. “Maybe I just want to live in 500 square feet and call it a day. We need to reconsider the sociology, psychology and urban planning of what makes sense . . . and redefine what we want. Tiny House Atlanta is working to encourage bigger thinking and offer more ideas for housing options.”

They are also trying to reverse the stigma that persists around RV campers and mobile homes as harbingers of blight and the destabilization of property values. Such stereotypes continue to inform zoning laws and housing codes, making it impossible to build homes under a predetermined square footage. But as more people are exposed to the creativity, ingenuity and genius behind homes designed to shape-shift, transform and make every inch count, old ideas are giving way to fresh thinking.

“I have devoted my whole life to raising my 16-year-old daughter, who will leave for college in two years,” says Nadia Giordanni, who once lived in a 400-square-foot home in Virginia Highlands, “happily,” before becoming a mother. “But when I thought about being an empty-nester, single and living in such a large space [as the one we currently occupy], the idea was not attractive to me.”

Seeking to avoid the isolation and loneliness that has become so pervasive in modern cultures, Giordanni built a 300-square-foot home on wheels where she could test-drive an alternative approach to living single. Her light-filled space was completed in February and is tricked out with 18 windows, a 13’-high ceiling (on the entry level), washer-dryer, cable TV, king-sized sleeping loft and yoga loft. It has been featured on HGTV’s Tiny House, Big Living, and is a hangout magnet for Giordanni’s girlfriends — who are attracted to the warmth of coziness of the interior — when it’s not booked on Airbnb.

Grant Park happens to be home to Airbnb’s #1 listing worldwide, a tiny treehouse. As well, Atlanta is home to architect Eric Kronberg, whose firm KronbergWall is at the vanguard of urban in-fill housing design. And Decatur has invited other visionaries in the field to speak at the festival — including Jeremy Weaver of Wind River Tiny Homes in Tennessee, Rusty Smith of the Rural Studio in Alabama and Andrew and Gabriella Morrison of Oregon, whose recently completed 221-square-foot hOMe project is Johnston’s idea of a dream home.

Festival talks will cover a range from How to Downsize and Organize Your Way to Happiness, to Zoning and Codes and Understanding Them, but the objective is not to convince attendees to live, work and play in 250-square-foot spaces. Rather, it’s to encourage visitors to contemplate the charms of simple-yet-intentional living.

“Most people will hold onto things for all the wrong reasons,” says Johnston. “We tend to think our homes should fulfill our every need. But I want to challenge people to think of home as a small space that can propel you into a far wider world of possibilities.”