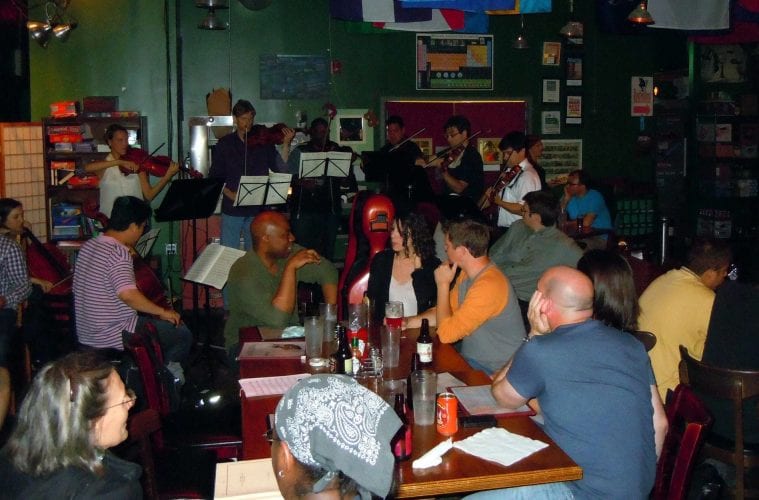 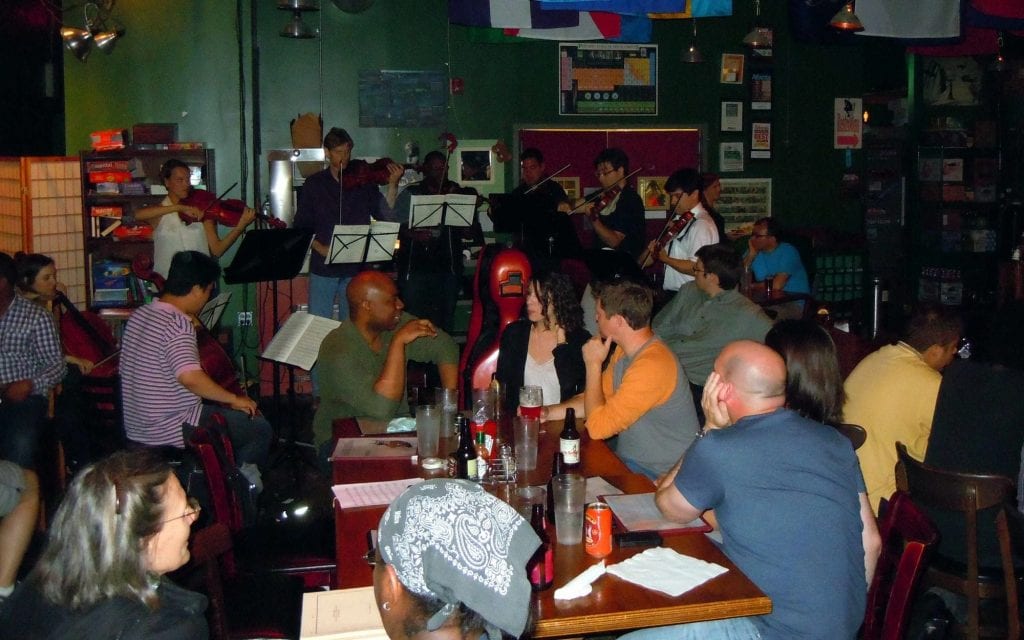 A Sunday evening in Decatur, not long after a genuine gully washer had pelted the city in the late afternoon. The air was still wet and drippy, but the sun had not yet given up on offering muted daylight through an overcast sky. Thinking Man Tavern was the destination, an urban taphouse à la mode: front brick facade with broad glass windows and dark trim, its double-door entrance a suggestive rosy pink. At 8 o’clock, a stream of classical musicians, their instrument cases in tow, began to gather at this local watering hole, seeking out others of their subspecies with whom to jam.

Classical music jam? You got that right. It’s Classical Revolution ATL. If you haven’t already heard through the grapevine, CRATL, as it is known, is a loosely confederated body of professional and amateur musicians whose continuing mission has been “to build community by bringing classical music to nontraditional venues such as bars and coffee shops, and to break down the barrier between audience and performer.”

CRATL is just one chapter of the Classical Revolution movement that got its start in 2006 at the Revolution Cafe in San Francisco’s edgy, arty Mission District. It was founded by violist Charith Premawardhana. Since then the organization’s spread has been viral, now with 28 chapters in the United States, three in Canada and five in Europe.

The Atlanta chapter, founded by violist William Johnston and flutist Jessica Sherer, made its debut in February 2011 at Olivia’s Cafe in East Atlanta. Both had come to Atlanta for work as musicians the previous August, but they didn’t know each other. Johnston had founded a Classical Revolution group in Cleveland; Sherer had co-founded one in Portland. Each was intent on starting one in Atlanta, and they both contacted Premawardhana, who put them in touch with each other. They decided to collaborate.

The first CRATL event drew a dozen musicians to Olivia’s. Word got around, and CRATL events have cropped up at a half-dozen non-traditional local venues, particularly in the acoustic-music-friendly eastern corridor. The performers deliberately move around. Last Sunday’s performance at Thinking Man drew some three dozen musicians and two dozen fans.

The dark indoor space of Thinking Man echoes the Gentrified Revival architecture of the outside. The décor is a carefully stylized adventure in anthropology and related sciences, but harking back in cultural flavor to an earlier era. Not to mention no stage and the acoustics of a concrete bunker.

The “classical jam” began. What was on the program? Nobody had bothered to say. They made it up as they went along. Free art, in both senses. Mendelssohn gone mad on beer in Decatur. Play it now: gonzo chamber music.

Occasionally, as with the Stamitz Trio, which opened the show, substitute instruments were played: bassoon subbing for cello, violin for second flute. Creative flexibility was at work. If you want to take part, show up with your instrument, maybe bring some chamber music, get in the queue. In theory, a devoted amateur could find him- or herself playing alongside a member of the Atlanta Symphony Orchestra, the Atlanta Opera or a professional chamber ensemble.

“There really isn’t anyone who doesn’t belong,” Sherer says. “That’s part of the beauty of it. So far, all of the amateurs and students who have come to play have been pretty advanced. But if they weren’t, they’d still be welcome, and I would be thrilled to play chamber music with them.”

Kiyo Kojima, who describes himself as a “six-foot Asian bassoonist,” is an active free-lancer in Atlanta’s classical scene. CRATL is his chance to build camaraderie with fellow musicians in a low-pressure, non-competitive context.

“People have so much fun here,” Kojima says, because no one is “under so much pressure to perform perfectly, to stay within a framework.” He suggests that as the city becomes more artistically vibrant, its community of classical musicians is reaching enough critical mass that spilling out from the confines of concert halls into alternative spaces is only natural and inevitable. “Why can’t we play the bars, spread out to places never seen before?” he asks.

The Thinking Man show was composer Brent Milam’s first CRATL experience. Fellow composers Adam Scott Neal and Sarah Hersch urged him to go, though they couldn’t be there themselves. Milam was hesitant at first. “I didn’t know what to expect,” he says. “I’m not a very social person if I don’t know anyone already. I’ll sit in a corner, drink beer and go home. I’ve already met people I had known only via Internet, and they introduced me to other musicians here. Honestly, it’s a great networking opportunity.”

CRATL is evolving rapidly. “This past Sunday was the first time that we’ve had more music than available time,” Sherer says, and when asked about her favorite music of the evening, her answer is definitive: “Mendelssohn’s Octet, definitely. Amazing piece, stellar musicians.” And they played it standing up, like an Argentine tango orchestra.

“Did you notice that it was a nonet by the end?” she asks. “An extra violinist joined in after the first movement, just to get in on the fun.”