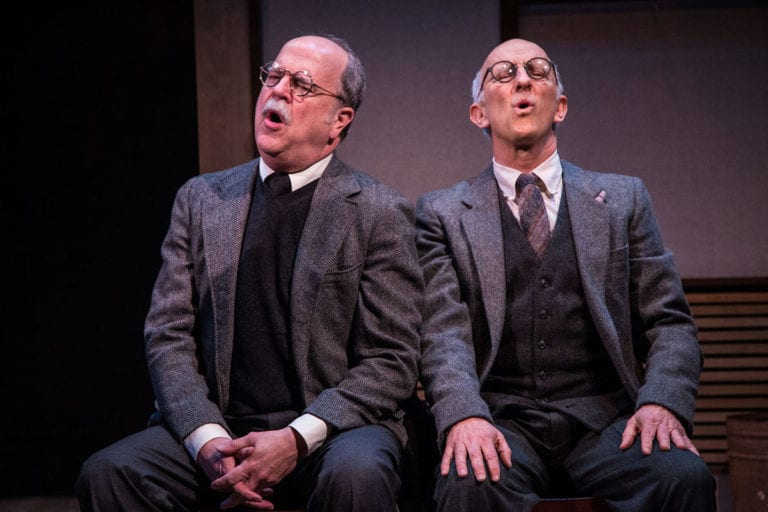 The Pitmen Painters, at Theatrical Outfit through March 24, asks lots of questions: What is art? Does its meaning lie with the creator or viewer? Should it be political? Is there a difference between a work of art’s worth and its value? How is that quantified? And, most tellingly here, am I any good?

Answering those questions falls to members of the Ashington Group of painters – three miners, a dental mechanic and an unemployed young man – who sign up for an adult-education economics class in 1934 Britain and end up with art appreciation instead. The largely uneducated pitmen are dubious until they move from seeing slides of great art — and making fun of them — to creating their own pieces.

Their story comes from history. The real-life Ashington Group lasted through 1947, a 13-year span that saw the painters find fame, patronage in high society and a place for their work in prestigious collections. These are hard-working men who left school early — we’re told through projections (set design by Lizz Dorsey, projections/lights by Mike Post). Most went underground at age 10 or 11. Most were dead by 58. They’re the kind of men who confuse “Titian” – the 16th-century Italian painter, for example – with “tissue.”

For better or worse, they also become family, a quarrelsome, bantering band of brothers as apt to cajole one another as offer a shoulder of support. There’s the fussy, rule-abiding George (Allan Edwards, with a bushy-bouncy mustache); the dim, quick-to-laugh Jimmy (Richard Garner); the unemployed Young Lad (Clifton Guterman); the dentist, Harry (Andrew Benator), who sees the political in everything; and Oliver (Brian Kurlander), perhaps the most gifted and aesthetically adventurous of the group.

As written, sadly, they’re mostly character types not fully dimensional, flesh-and-blood human beings. The same is true for the women here — Tess Malis Kincaid as a wealthy collector of art and artists and Caitlin Josephine Hargraves as a life model.

Kurlander’s Oliver, the one most comfortable with art’s more esoteric questions, is probably the best drawn. On opening night, though, it felt as if Kurlander (excellent in this season’s The Royale) was still stitching things together. A few seams showed.

Theatrical Outfit has assembled some of Atlanta’s best actors for The Pitmen Painters and surrounded them with first-rate production elements: Dorsey’s set, Post’s lighting and projections, a soundscape by Dan Bauman that features rumbling trains, fiddles and maybe a harmonica or two. The script just doesn’t hold up its end.

The talky and overly long piece comes from British playwright Lee Hall, who tilled similar ground with Billy Elliot: The Musical. The towns of Ashington (where the pitmen live) and Easington (Billy’s home) lie only 35 miles apart on the English coast near the North Sea.

The Pitmen Painters debuted in 2007, but its storytelling feels dated, more rooted in an era when Eugene O’Neill wrote dramas of three or four hours in length. Hall, alas, doesn’t have the same facility for language. New York-based director Adam Koplan uses elegant and swift scene changes to move things along, but he, too, is hampered by the script. It repeats some of the same debates and jokes, features a mélange of regional British accents and digs into political issues unfamiliar to many of us. It’s humor usually lands but sometimes at the cost of character growth.

Maybe it’s a British thing. The Pitmen Painters sold out runs at theaters in Newcastle upon Tyne and London in 2007 and had a three-month Broadway run in 2010 (no Tony Award nominations, though, in a season dominated by Britain’s War Horse). This staging just doesn’t resonate. We’re left feeling, or unfeeling, as the pitmen did when they were seeing their first da Vincis and Michelangelos.