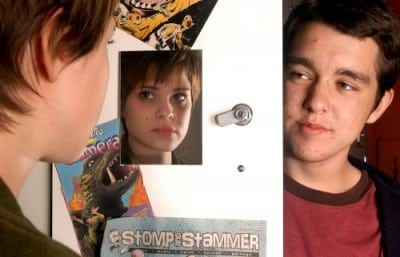 “The Storytelling Ability of a Boy” packs a lot into an hour and 20 minutes: a love triangle that keeps morphing into new permutations, high school bullying, an act of self-mutilation, a teacher with boundary issues, confused sexuality, a cello, a shotgun, a lot of hilariously nasty profanity mixed with brutal poetry and even more pretentious blather. It’s like that joke everybody makes about the weather no matter where they live: if you don’t like it now, wait five minutes and it will be different. For that matter, you could say the same thing about living with a teenager.

Synchronicity Theatre’s production just opened at 7 Stages’ Back Stage Theatre in Little Five Points and is only the fourth time Carter W. Lewis’ play has been performed anywhere, and the first time it’s been staged with real teenagers playing the two high school student roles. Those would be Lily Chambers, a senior at the Paideia School, as Dora and Jason H. McCarthy David, a junior at Woodward Academy, as Peck. After seeing how great they are wrestling with this problematic play, I certainly don’t need to see adult actors trying to play these crazy mixed-up kids. They’re joined by Joy Brunson as Caitlin, their teacher, in the three-character drama directed by Rachel May. 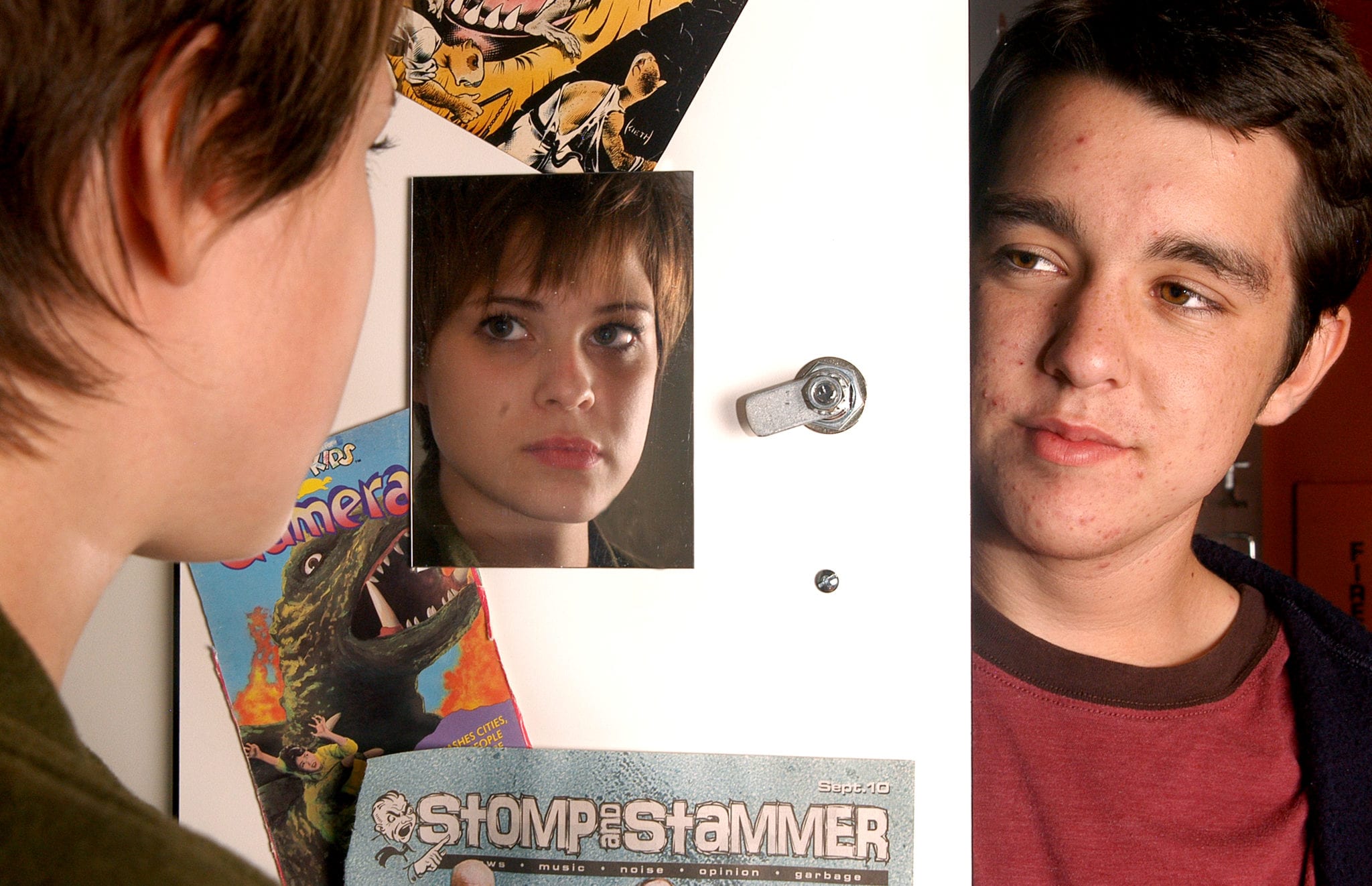 The boy of the title, Peck, is a creative and brilliant young writer, a bit of a mooncalf, like John Cusack at the start of his career. He’s the ongoing target of a gang of school bullies, and the sort of unsexy nice boy whom all the girls want as a friend, and just a friend. That’s the case with Dora, who’s damaged, cynical, self-destructive and pretty funny when she gets cranking. Asked what she usually eats for dinner, she spits, “Crap. And when I run out of crap, I eat artificial crap substitute.” 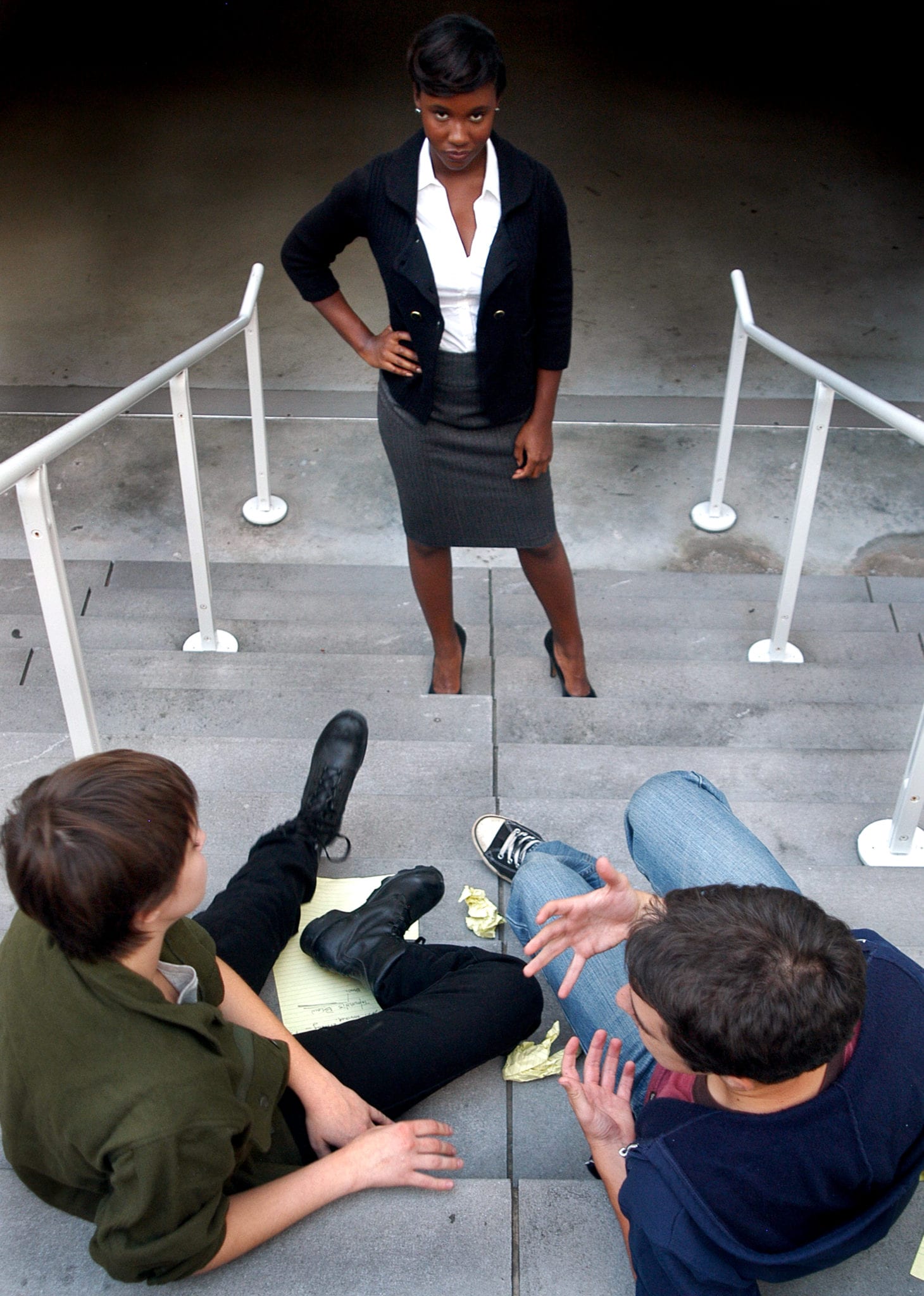 At first, it seems that Caitlin is trying to protect the vulnerable Peck from getting his heart stomped by Dora’s leather boots. But Caitlin, who’s 27 and divorced, is fleeing crap from her own past, and not the artificial substitute kind. She’s as confused as both of her students, and arguably not as strong as either of them; she also gets more interesting the more we learn about her. (Photos by Bethany Joy Collins.)

Lewis’ script is all over the road. One scene will be “Who’s Afraid of Virginia Woolf: The Early Years,” as Peck and Dora wield their love like Uzis at 10 paces. Then there will be something oblique and hard to follow, then a little “After School Special.” A lot of time is spent on Peck making up stories, or Caitlin telling stories that Peck has told, and then commenting on Peck being a storyteller, and so forth.

For this show, Synchronicity is partnering with the Anti-Defamation League’s excellent “No Place for Hate” program, designed (in part) to help schools educate about bullying. “Storytelling Ability” will almost certainly appeal to sophisticated, older teenagers, but parents of younger ones should be warned that it is very mature and frank in its subject matter and that the language is as crude as, well, a high school hallway when there are no teachers around.

It’s a bit of a mess — even the title is a bit of a thud — but occasionally a glorious mess. And when confronted with something this contradictory, sometimes it helps to find one true thing to cling to. For me, the truest was Lily Chambers, who plays Dora like a strand of barbed wire soaked in whiskey and self-pity; as I’ve thought back on the play, it’s her commitment to a memorable character that I remember best.