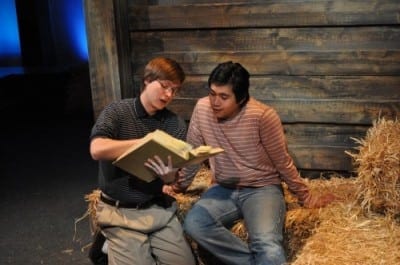 In “Edith Can Shoot Things and Hit Them,” playing at Actor’s Express through November 26, Benji (Tucker Weinmann) and Kenny (Ralph del Rosario) are the only sophomores in high school pre-calculus, and, as things unfold, we find that the two are prematurely facing far more challenging problems than just differential equations. After the death of his mother and abandonment by his father, Kenny has been left in charge of the household and of his younger sister Edith (Rose Le Tran). Kenny and Benji begin to fall for each other, and things get serious fast given the liberty and autonomy available at Kenny’s house, but they’re eventually stalled by Benji’s disapproving and controlling parents and by complications caused by Edith’s precocious overprotectiveness.

Tucker Weinmann as Benji and Ralph del Rosario as Kenny in "Edith Can Shoot Things and Hit Them" at Actor's Express. (Photos by KICK Strategy)

There are a lot of funny moments in “Edith.” The situations seem fresh, honest and fully imagined, all crucial to the sort of bittersweet, quirky comedy that talented young playwright A. Rey Pamatmat is aiming for. The young, three-member cast does a nice job of keeping the tightly focused play energetic and particularized. Adult actress Le Tran, as the 12-year-old Edith, captures the self-important gravity of a precocious girl at that age: Edith pretends that she’s been sent to earth by aliens as a test, but Le Tran wisely understands that to the character, the game is deadly serious.

Edith’s newly developing concerns with justice and duty have become obsessions. Del Rosario conveys Kenny’s burden of adult worries without a note of self-pity or melodrama. We understand the respite his newfound love offers him and why he rushes toward it: when he smiles, we get the sense of heavy care unexpectedly, miraculously lightened. Weinmann is especially strong and convincing as the geeky but daring and imaginative Benji. Whereas Kenny quietly places his nose to the grindstone and hopes not to attract attention, Benji is a supergeek, unafraid to show his wide-ranging enthusiasms. He has a fearlessly objective curiosity, whether exploring sex, reading comic books or contemplating the infinite divisibility of space.

The play’s best moment comes in Benji’s realization that parents’ indifferent treatment of their children negates claims to power over them. It’s a triumphant moment: he recognizes that autonomy is not merely the result of abandonment, but a just and desirable outcome considering cruel treatment at the hands of undeserving parents.

But the play often feels closer to idyll than drama. It seldom pulses with possibility, menace or tension. Moments before the end of the first act, a threat arrives, but when the lights come up on the second act, we find out immediately that truly serious harm has been averted. Edith can shoot things and hit them, but the bullets from her gun do little harm: a serious turn is suggested, but then we quickly veer away from it. Similarly, many of the play’s obstacles are dispatched so efficiently that some barely seem like obstacles at all: the 16-year-old male protagonists retain a remarkable clear-headedness in the face of some bewildering situations. It’s a nice switch that they’re so unaffected and undamaged by the reactionary culture outside the door, but they seem to wander out of the maze so easily that there seems to be no maze at all. The characters are so sweet and perceptive, and the environment so safe, that one wonders if the presence of adult characters on stage might have given the play more tension.

Kenny’s father has an interesting arc, even if only in Kenny’s understanding of him: from distant, abandoning villain to weak but understandable man. Benji’s mother loses her authority over him, and his father eventually accepts Kenny as Benji’s boyfriend. These absent characters’ stories work well in narrative summary processed by the characters on stage, but they might have provided more immediate drama if placed before us, for us to witness and judge for ourselves.

In the end, “Edith” may divide audiences unevenly. Many will enjoy seeing sweet, likable, quirky young gay characters in situations that suggest drama and threat. But another, likely smaller camp will feel that there’s some genuine complication and heft missing here, and they may even feel alienated by the self-conscious quirkiness. Gentleness and sweetness are the play’s primary strengths, but in decentralizing radioactive elements, some essential pulsing dramatic excitement has been inadvertently circumvented, too.