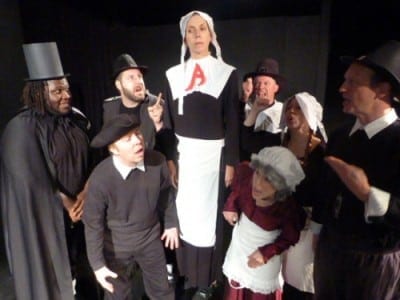 Review: Reel in some laughs with “Deadliest Sketch,” greatest hits from Decatur’s Sketchworks

In Puritan New England, no one knows why Hester Prynne (Sandi Scheier) wears the “A.”

Sketch comedy, pretty much by definition, is uneven. Even the classics — “Monty Python’s Flying Circus,” “In Living Color” — had their share of clunkers, and “Saturday Night Live” remains the longest-running textbook example of hitting .250 on a good night.

So a greatest-hits approach is the way to go with sketch, as proven by Sketchworks, the little Decatur-based non-profit comedy troupe. Its latest show, “Deadliest Sketch,” is a best-of culling of some of the group’s funniest work over the past couple of years, which runs through March 3 at a mere $15 a ticket.

The company barrels through 21 skits in two hours, some of them filmed bits that provide the actors with a little breathing room. Not every one is a winner, but most are pretty good to great. Highlights include:

You can see a bunch of Sketchworks’ videos on its YouTube channel.