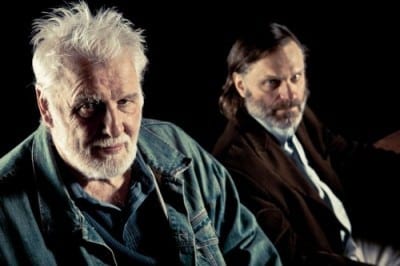 Decatur’s PushPush Theater is the love child of two actors, Shelby Hofer and Tim Habeger, who have turned their space into a multi-purpose cultural emporium where actors, filmmakers and cineastes can get together to see plays, attend workshops and view or make movies (the local film success “The Signal” was incubated there). It’s a laboratory and creative clubhouse, and you get the sense that, 21 years after founding it, Hofer and Habeger are as thrilled as ever to make a living from creation.

At the preview for their latest production, California playwright Murray Mednick’s “Borderline,” Habeger quickly transitioned from greeting the crowd in the space’s cramped lobby to introducing the play and then mounting the small, minimalist stage to perform. As the play unfolds, it’s easy to forget that you are in the staid suburb of Decatur. You could be in the East Village or Los Angeles, watching raw, exploratory art-making flame before your eyes. (“Borderline” will run at PushPush through January 29.) Two men stand on a stage lost in a conspiratorial fog, as loud, brash Carl (Habeger) berates the timid, neurotic Craig (Alex Van) for being a pushover with a bossy wife and a “borderline” personality disorder. Carl seems to have a feeble understanding of what, exactly, borderline means, and keeps offering to lend Craig a book so he can better understand his flaws. It’s a great assessment of a very 21st-century personality tic (along with Mednick’s au courant bead on adopted Asian children, power wives and slacker husbands): everyone’s an armchair authority and glad to share his incompletely absorbed knowledge. Initially Carl seemed like a figment of Craig’s imagination, an inner voice pecking at him with fears and doubts. But it turns out that that’s just how characters speak in Mednick-ville, spewing forth a nearly Mametian gurgle of words fueled by doubt or anger, dread or boredom. In Mednick’s play — PushPush has mounted eight of his works — life sucks and then you die.

But what might seem an impossibly dire work about marital and generational alienation, environmental destruction and corrosive self-doubt has a surprising strain of lightness and buoyancy in the strangely detached, amusing way the characters converse. They may issue definitive, bossy pronouncements and rage against the world, but you get the sense that they’re as confused and lost as anyone. It’s a comfort and makes for a surprisingly effervescent spin on contemporary despair. Despite his obnoxious desire to stoke the flames of Craig’s marital unhappiness, all the better to validate his own crumbling marriage, Carl is one of the most engaging of “Borderline’s” California malcontents. A college instructor and ceramicist with a super-sized ego that can’t hide his essential unhappiness, Carl seems bound and determined to make his ophthalmologist wife Frances out to be a monster. He longs for Craig to come along with him for the ride and vilify his noxious wife Cindy (Hofer). But Carl is too much of an easy-going pill popper, happy to while away his days debating God and the Holocaust with his pal Spotsy (Eddie Levi Lee), a homeless rabbi who lives in his car, carries shot glasses for that quick schnapps fix and shuffles across the stage like a droopy basset hound. Spotsy may be homeless and alone, but he often seems like the most contented guy in this crowd of mouthy misanthropes who like nothing more than meditating on the human condition as a way station before the inevitable dirt nap and disintegration of flesh into soil.

“Borderline” offers a grab bag of ideas to chew on, depending upon your mood or inclination. (“Is there a God, or just suffering?” is a typical vein opened up for bloodletting.) It’s the brightest play about suffering out there, and as good an antidote as any to the nihilistic strain of joy that defines so much of our popular entertainment.